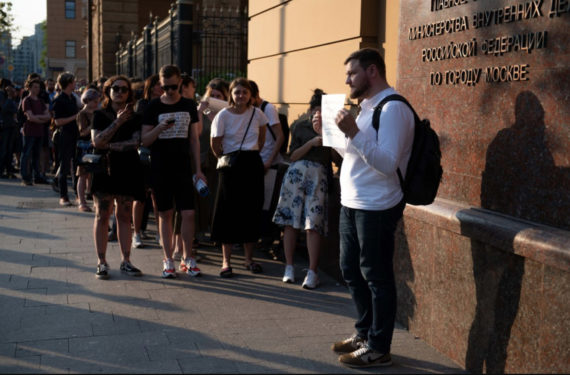 Reading today about the case of Ivan Golunov, the investigative journalist who was falsely arrested (and has now, remarkably, been released and cleared of all charges), I find out that in Russia only single-picket protest is allowed.

Imagine that. No gathering or assembly. No Extinction Rebellion, no Reclaim the Night, no protest against education spending cuts.

In Russia protesters must stand at least 165 feet apart to qualify as a single-picket protest, or risk arrest.

On June 7th, the day after Ivan Golunov’s arrest, people queued to have their turn to protest against his arrest and imprisonment. There is more information and remarkable photos in this article by the newspaper Golunov works for. https://meduza.io/en/feature/2019/06/08/you-can-t-be-proud-of-a-country-where-this-happens

In the UK we have:

These are in our Human Rights Act 1998 as enshrined in the ECHR European Convention on Human Rights.

Following a two year trial by the London Metropolitan Police on using Live Facial Recognition (LFR) in their communities – the London Policing Ethics Panel has produced this final report.. 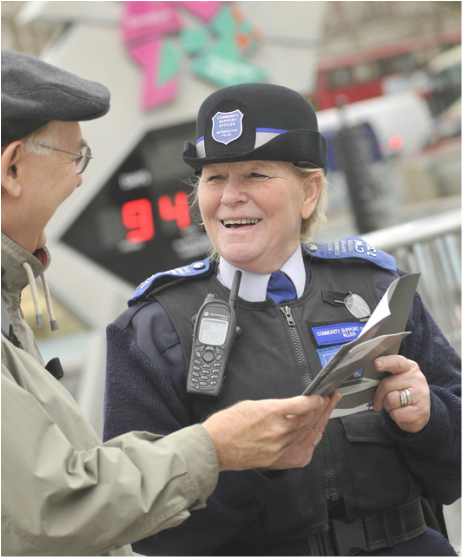 And here are some of the parts that particularly interested me or chimed a note:

On the ‘chilling’ effect of LFR

We also asked survey participants whether they would be likely to stay away from events where LFR would be in use (a so-called ‘chilling effect’). Overall fewer than one in five respondents thought that they might stay away from events, but there was significant variation across sociodemographic variables. Younger people were much more likely to say they would stay away from LFR monitored events – 38% of 16-24 year olds compared to 10% of those aged 55 and over – as were people from Asian, Black and Mixed ethnic groups.

Additionally, it should be noted that in our interviews some commented that they would be more likely to attend LFR monitored events, as they would feel safer. p7

LFR should only be deployed where the following five conditions can be met.

On the inherent unknowingness of the impact of new technologies

“The use of LFR technology is in its infancy in UK policing. There are currently significant limitations in terms of how and where LFR might be used, and therefore the types of outcomes it might produce. But it is a defining characteristic of new technologies that their eventual reach is unpredictable, a characteristic which makes ethical assessment particularly challenging. We sought to be realistic in our ethical assessment by grounding it in LFR’s current capabilities, whilst also being attentive to the benefits and harms associated with a more highly developed version of the technology. Overestimating future benefits and harms “may well lead to a focus on scenarios that are morally thrilling but very unlikely” (Van de Poel, 2016) but some degree of ethical imagination is imperative. When novel technology is introduced it is relatively uncontrolled and its uses experimental, so it is hard to gauge its impact. By the time a technology is more established, it may be too difficult to halt its use irrespective of harms or negative effects. (Collingridge, 1982)” 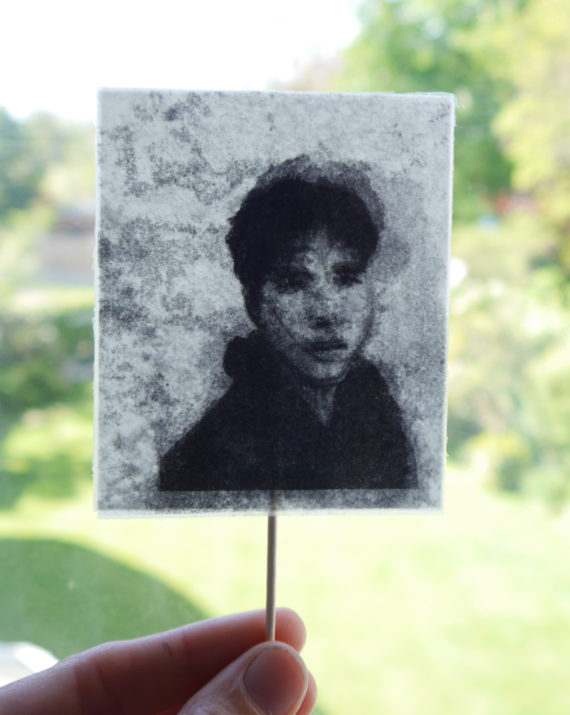 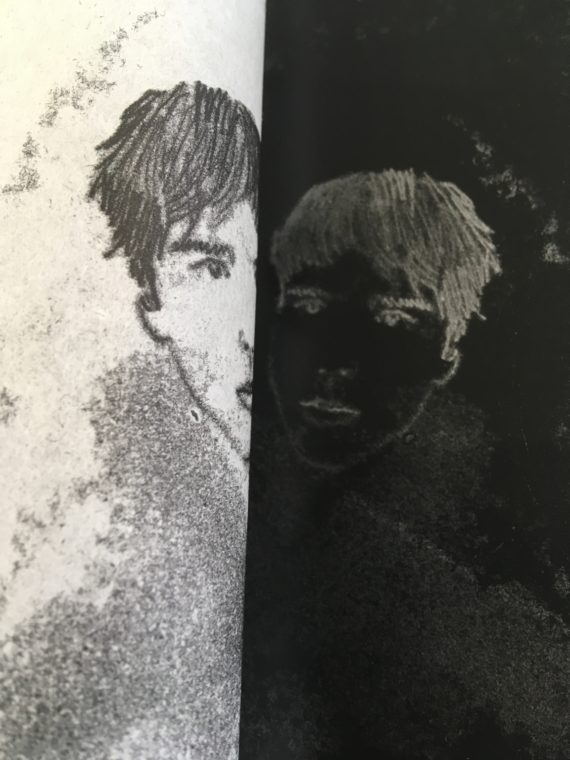 For my Urgency Commission with the University of Exeter (UoE), I will be working with people who have been or are protesters. I am hoping some of them will be UoE staff and students. To reach people often takes a little while. In the meantime I have started to test the processes I may use to create the liminal portraits.

The intention is to involve the protester-participants in the making of their own liminal portrait, and in the process to explore and discuss AFR technologies and their potential impact on the right to protest.

In this way I need to find a process of making that can genuinely involve them, yet is steered by my plan for the final outcome. (I do not therefore call what I am doing ‘participatory art’ – I’m sure I’ll write on this later, or in a different blog, the difference between co-produced and participatory art)

Yesterday I made a whole load of monotype portraits, using a helpful volunteer as a test-subject. I will play with these in several ways, including as chine collé onto embossed prints.

Panopticon .. that’s a new word for me. It is satisfying to say and particularly in the context of the area of automatic facial recognition (AFR), gratifying to learn about. 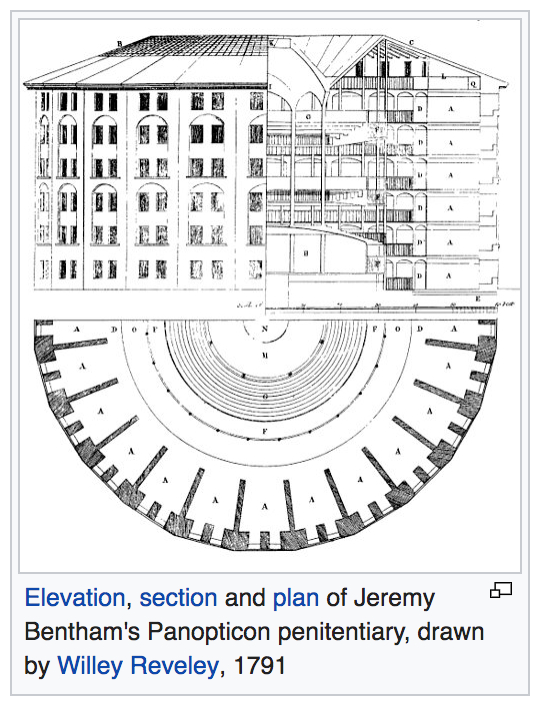 I was drawn to the Wikipedia page on the Panopticon by this article on Medium by a contributor Meltem Demirors.

The panoptican is a type of building and a form of control. Jeremy Bentham, a social theorist in the 18th century, came up with a design for a prison whereby all the inmates could be observed by a single watchman. As stated in the Wikipedia entry:

The use of AFR is a form of panoptican. The threat of observation and monitoring is bound to influence how we regulate our behaviour. There are a multitude of protests happening right now – how will the increasing (and currently unregulated use) of AFR in public spaces impact on people’s desire to be counted in the future?

Demirors speaks of the necessary privacies that we should demand in the face of pervading surveillance.

I would add a fourth perhaps.. Privacy in Protest, meaning we should be able to attend a gathering with like-minded others to raise awareness on a critical issue, and that we should be able to do this without fear of our biometric information (or our children’s or young people’s) being added to a database for purposes beyond our knowledge or control.

The protest, the peace gathering, the vigil, the action – all forms of action which are there to empower people to stand up and speak out on behalf of others, could be made impotent under the threat of surveillance and its unknown implications.