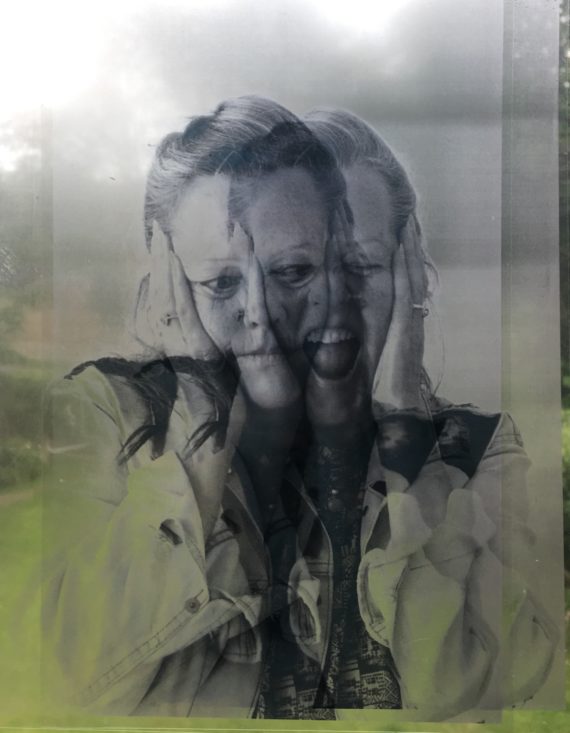 Here’s the plan for what I’ll be making for the commission. It’s emerged quite slowly. I’m generally surprised at the amount of time it takes me to develop work. I spend equal amounts of thinking and making. My process is a loopback between visual exploration of materials and mark making and returning to the question and what it is I want to convey. I don’t expect the viewer to be presented with a message, however it has to be what I want to communicate – how and whether this is received is another question.

I am working with five people who are protesters. I want to convey a breadth of reasons that people stand up in public to protest. These maybe school funding cuts, Brexit, Trump visit, climate emergency, women’s refuge closure, nuclear disarmament, Iraq war…

Each person can be involved as much or a little as they like, or as life allows. I have a consent form which states they will remain anonymous although the nature of the portrait may mean they are visually identifiable. The form states that they can withdraw their participation at any time – although if images of the made work have already gone online I am limited in removing all the links to the work. The form also states where their photographs are kept (non networked encrypted computer) and that they will be deleted after use.

I begin by taking a sequence of photographs of their head and shoulders. I say to them that they can be creating a movement which may say something they want to express, or it can be quite arbitrary.

A sequence of photographs are printed onto transparencies which are used to prepare a series of screens for screen printing. At this point they can get involved in choosing the sequence, and in the printing, if they like.

The screen printed images can be in different colours. They will be printed onto a lightweight Japanese (Kozo) paper. The paper is translucent when held up to the light, but despite its seeming fragility, it is quite strong.

The screen printed portraits will be selected, played with, and then layered and glued together. Again, they can be involved, or lead on this, if they like.

These portrait-placards will be taken into the public space where the they have protested and photographed with the placards held in front of their face. I hope that the light shining through the placard will create a liminal portrait.

The final work is both the portrait-placards and the photographs. The titles of the work will be each person’s protests (they could be long titles!). I hope to also include an audio piece featuring an expert on the human rights issues around facial recognition and a facial technology business developer.

NB. I will be paying for assistance from skilled and talented people for the screen printing (George Barron at Double Elephant Print Workshop), gluing paper (Alysa Freeman, recycled paper jeweller) and for the photography.