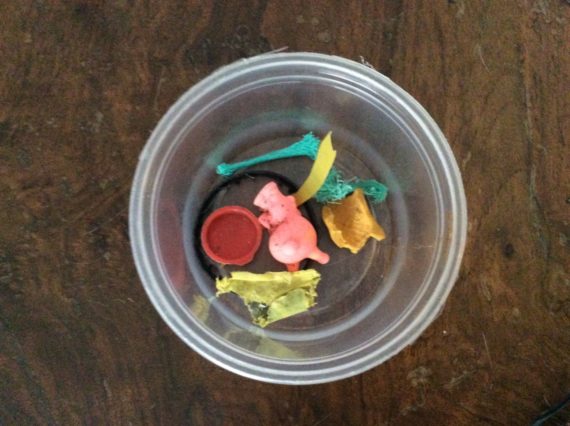 Flotsam is the term used for objects that float away from a boat, jetsam is thrown over board.

Today I picked up a more colourful selection to the usual coke cans and water bottles, crisp packets and straws. Today I noticed the small things. A smarties lid with the letter ‘t’ embossed underneath. T for tide, tension, tolerance. Two small pieces of green string, unravelling and frayed, breaking down into component parts of thread. Three pieces of yellow plastic, different shades of orange and green. A circular black plastic seal from a lid now opened, and a pink creature with antennae on its head, wings and a tail at its back.

All these things have a story I will never know. The life cycle of plastic means that they will have many more beyond my lifetime too. Every piece of plastic ever made still exists. Increasing amounts end up in the sea. Some of it gets spat back out again, a reminder of times past and times yet to come.