Although not central to her practice, drawing has been an important part of Judith’s journey. She is a skilled draughtsperson and is considering how best to use this skill in current projects. She drew the insides of the packaged objects she made as part of The Discovery Room.

This project was the culmination of three years training as a Fine Art Printmaker at the University of Brighton during which time she experimented with different media including handmade paper, book and box works, screenprinting and digital printing.

Part laboratory/part workspace, The Discovery Room, was built by Judith for her Final Degree Show. Here she displayed a large whiteboard which detailed her previous experiments and a new board on which she documented the experiments that she undertook during the exhibition. There were dossiers and catalogues of collected specimens, drawings and diagrams in the laboratory drawers and a series of xrays were displayed which revealed the contents of bandaged objects she had made. These anatomical-like packages with names like ‘cyst’ and ‘constriction’ had been made in response to her study of Leonardo Da Vinci’s notebooks and drawings and her yearning to show, to open and yet to keep safe what is inside, the inner self, the secret/the secreted. She was interested in Da Vinci’s ‘search for the soul’. She investigated too the ‘stone of melancholy’ (1) and wondered about her mother’s struggle with depression. Judith’s interest in medicine and science grew during her elder sister’s training as a radiographer. As a child Judith visited the radiology department and became fascinated by xrays and all things medical.

This current investigative project has evolved from earlier work she began as an artist in residence for Watch This Space at Phoenix Studios, Brighton in 2005. Four artists were chosen to set up their workspaces in the open studio so people could come and watch ‘the creative process’. Judith’s method of investigation and documentation was highly suitable for this project. She set up 10 large boards and made a series of mind maps detailing both her practical and thought processes as she worked. She began to extend the maps from the boards onto the floor of the studio corridor and hall by means of trails of blue dots, yellow dashes, green stripes; when she encountered a radiator, a step, some other feature of this indoor land, she numbered it, found a way round it. She draped cloth over some objects to create strange moors and hills. A series of tracks lead round and through the space. She took photos of these small indoor landscapes and produced long folded sheets, half-map, half-book. Visitors followed the tracks she had laid out, they studied the work-boards, used the white stick and blacked-out spectacles that Judith had borrowed from the local Blind Association. How did blind people find their way? Might we learn different even fuller ways to find our way in the world using their tools?

Shortly after this residency Judith won an Art Plus Award for a proposal to develop ideas for a public art project “A Sense of Direction”. She began 8 months’ work researching ideas for the project, working with groups from the Eastbourne Blind Society and the RNIB. She documented the process and produced maps, photographs and drawings. 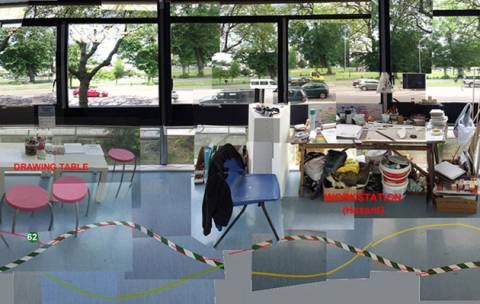 Judith Alder – Finding Her Way
Part 1
A copse of paper trees greets me as I enter the Blue Monkey Studio where artist Judith Alder works in Eastbourne. These trees are made from discarded ordnance survey maps, rolled, cut and soaked in woodstain. The trees stand three feet high, each tree stuck to the floor with plasticene. Another group of trees stands proud on the bench. These paper sculptures remind me of my Rupert Bear annuals – at the end of each story was a page of instructions on how to make a folded paper tree or ladder or boat. I want to play now, to cut my own trees. Judith uses these low-tech forms to make a paper landscape. Do they help her see the wood from the trees? She tells me she wants to find a way to present the trees for others to negotiate their own paths through the wood.

A line of string falls from the ceiling and piles into a messy circle on the floor; a paper roll from a cash register hangs down and makes another pile. I see letraset numbers at intervals on the paper strip. These lengths of string and paper measure out Judith’s journey from home to studio.

Judith is engaged in a mapping process. As she travels ‘round the houses’ she collects information and objects along her way and documents her path by slinging her camera over her shoulder and setting the timer to take a picture every minute. In exchange she leaves waymarks such as a pebble, a fircone or an arrow made of sticks along her route.

She is investigating her back garden too. From photos of small sections 12 inches by 6 inches she is making a set of drawings half that size. She has to interpret the picture and use simple lines to denote plants, bricks, stones, features of these tiny landscapes. She is surveying small lands. Is this a way to orientate herself, a way to respond to and express her experience of being in the world? Can we see more too by looking at the work she shows us?

The rest of this article will be posted on Projects Unedited in sections over the next few days. The complete article can be downloaded from: www.roz2.co.uk/news.html The project, Breaking Ground, is a partnership supported by a NAN New Collaborations Bursary (AN – The Artists Information Company). This article is part of the project. And the partners (Judith Alder and, Roz Cran) will develop a joint residency on an allotment. In addition they are collaborating in the organisation of BMPD (Blue Monkey Professional Development for Artists). The first BMPD event took place in June 2007 in Eastbourne where they plan to arrange a year-long programme.

Last Friday I visited Jane Ponsford of Papertrails, a fellow blogger on AN Projects Unedited. We had met at the AIR meeting at Fabrica in March when Judith and I did a short presentation about collaboration. I wanted to see Jane in residence in St. George’s Church and took the opportunity to make paper at her workshop.

We were able to have a brief talk before the workshop started and had lots to say to each other about residencies, collaboration and blogging. I made sheets of pure white paper and pressed them on shapes and words in and around the church. I found carved words, ‘hope’ and ‘sorrow’.

It was like meeting up with a colleague engaged in a parallel process. I invited Jane to our allotment residency in the Autumn. I look forward to continuing our conversation and to more collaborative links. 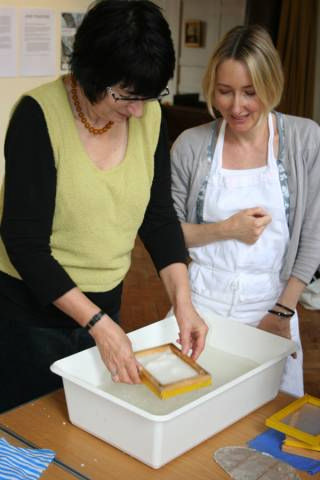 Roz Cran – Seeing Through The Eyes Of The Other

Roz's current work focuses on collaboration in various forms, continuing to strengthen the links between past and present. Her most recent work is titled "Collaboration", and through it she continues to draw upon family history. She has painstakingly traced the lines which form a series of drawings made by her grandfather, almost ritualistically repeating the movements and actions needed to create them. The process complete, Roz combines the traced images with her own photographs of "Holy Rabbit" and "Berlin Bee". The collaged photographs seem to form a portal through which Roz's characters can experience yet another dimension of existence.

For the future, Roz is planning a new film piece to be based upon the first meeting of her grandparents by chance, whilst roller skating in Battersea Park. I will wait with interest to see what new dimensions Roz will visit during the making of this work, and look forward to the opportunity to share, through the work, a glimpse of whatever Roz sees as she looks at the world through the eyes of an other.

As well as developing her individual work, Roz has embarked on a new venture – collaboration. The project, Breaking Ground, is a partnership supported by a NAN New Collaborations Bursary (AN – The Artists Information Company). This article is part of the project. And the partners (Judith Alder and, Roz Cran) will develop a joint residency on an allotment. In addition they are collaborating in the organisation of BMPD (Blue Monkey Professional Development for Artists). The firs tBMPD event takes place in June 2007 in Eastbourne where they plan to arrange a year-long programme.