Today was wet and windy, just right for a trip to the English seaside, and Judith and I trained to Margate to see Crate Project Space where we plan to hold our third Breaking Ground experimental residency next month.

Margate has some interesting buildings and is in regeneration mode. We met Moyra and Chris from Crate who showed us round the Space. It is great, there is a dark room too with a small hatch through to the large white room. We talked things through and have agreed to be in residence from 21 – 30 November. Open Day will be on Saturday 29 November from 2-4pm with a Talk and Discussion at 4pm.

The building was formerly a printers and I was struck by the many- paned windows and the outside iron staircases leading to a roofspace. Apparently there is still some printer's ink in the dank cellar.

We will have to stay overnight in Margate for most of the time and we started our search for handy accommodation. Also had time to call in at Turner Contemporary Droit House on the harbour and look at the plans for the new gallery.

Plans are beginning to form. Judith printed our first batch of invitations yesterday and we took them to Talk about the Work at Claremont Studio for our first piece of advertising.

I registered BREAKING GROUND as an organisation on the Big Draw website and put details of our Big Draw event: DRAWING IN THE DARK which will be part of our Open Day for UNDER GROUND on Sunday 19 October 2-5pm. I am starting a collection of chalk and clay to draw on the dark walls of the basement Pine Gallery. You can draw those underground creatures, tunnels and chambers.

Roz & I are excited this week at the momentum which is gathering as we pick up the threads of our project following the summer break. Yesterday we looked together at the space at the Pine Gallery where we'll be working in just under three weeks time. As always, our ideas and imaginations began to work together as we thought about what we might do during our residency there.

Then, today, we received confirmation from Crate in Margate, that they can offer us the Crate Project Space for the third & final residency in November. We're going to visit Crate next week, and are excited about the prospect of working in a town where we haven't worked before, meeting new artists, taking part in new discussions about art and making new work!

While researching some of those creatures which build their homes underground I've been reading a great book called "Animal Architecture". This has really caught my imagination, and I've become especially interested in those amazing animal architects of the Ant & Termite families!

I'm intrigued by the apparently meticulously structured ant society in which worker ants become physically adapted to carry out their tasks – some workers developing huge heads used to block the doorways to their nest (if that is their allocated task), others with bodies transforming into living storage vessels to contain huge amounts of honeydew to feed the colony.

I came across a scientist, Walter Tschinkel at Florida State University, who has been making amazing plaster casts of ants nests – how did he do that? 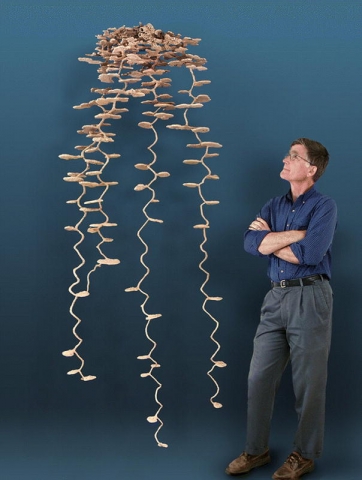 Just getting back to work after the holidays and beginning to prepare for our next residency, UNDER GROUND, in the basement Pine Gallery at Claremont in Hastings.

I went to Orkney on holiday and was amazed at the history embedded in these small islands. People have lived on Orkney for 6000 years. We visited several fantastic Neolithic sites and (not entirely by co-incidence) I was able to spend some time in underground chambers in a variety of mounds and cairns. Perhaps the most puzzling was the deep pit of Mine Howe with its 29 steep, ladder-like steps down to a tiny chamber; the most fascinating, Maes Howe, with its Viking runes and tales of the mid-winter sun shining through the tunnel entrance onto the inner wall of the chamber at sunset.