Last Monday Roz & I visited the print workshops at the University of Brighton in preparation for our residency there. We met with technicians Ray Dennis and Wayne Case and Ray gave us a walk-round “refresher” of the workshop areas. Although it’s nearly five years since I used the screen-printing workshops, it still seemed very familiar and I came away with a sense of anticipation and excitement about the prospect of a month in such a productive environment.

Our residency at the University begins on the 4th February. We’ll be developing our ideas for Breaking Ground through printmaking and, as Artists in Residence will be giving talks and tutorials to students.

Part of the polaroid mystery is solved. I found another photo and another and followed them back to Ken's blind shed (it has no door). There was a stack of them by the wall. On the grass lay a panel blown off the shed. Photos were stuck in rows on this. I took photos of it but wondered who had put these polaroids on the panel, when and for what purpose. More questions.

I took 5 plastic bags of rotting vegetable peelings up to the allotment for the compost heap. I put the mouldy old bags into an empty black bag and picked up litter blown over the beds by the winter winds.

At the bottom of the allotment I saw a rectangular scrap and bent to pick it up. I could not believe my eyes – it was a polaroid photo of a chest of drawers. Where had it come from and how had it blown up now?

I had gathered the first polaroid picture of furniture in February 2007 at the beginning of this project. And continued to find the rest of a small collection of 23 photos over the next few weeks.

Here was another, months later, at the beginning of 2008 and the start of Stage 2 of BREAKING GROUND. The fates are with us. 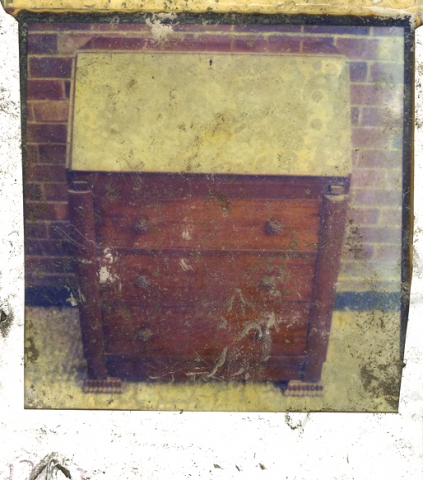 During our meetings about funding applications it has become clear that we have started on Stage 2 of BREAKING GROUND.

This will comprise the Residency at the University of Brighton Printmaking Department for the month of February 2008, producing a book about Stage 1, bringing the project indoors and using 3 Project Rooms along the South Coast as a Platform for testing out the transfer and development of the work inside. This is an exciting and challenging position to have moved into. Lots of work ahead, but with clear purpose.