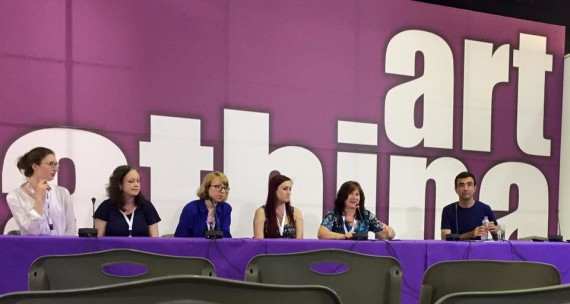 There’s a section in the ACE funding application form in which they ask what our project audience figures will be.

Of course its hard to be 100% sure, you can only guess. Yesterday though, I had an email off the Platform organiser with some actual  figures –  42,000 people visited the exhibition.

An incredible amount…and considerably higher than the estimate I’d put on the application.

We knew there were a lot as it was really difficult to squeeze past the cars in the car park some days. People were actually queueing up to get in.  Its hard to believe anything like that would happen in the UK.

Our website: https://sciartistprojects.wordpress.com/  has had 218 hits since the project started on 24th May.  That’s mainly Greek visitors, but roughly 20% were from the UK. That should change as we start to plan the UK part of the activity.

Our talk went OK in the end, despite the fact that we didn’t have any images.  If it were longer, it would have been a disaster, but 10 mins was just the right amount of time to keep the audience engaged.

When we posted the image above (of the talk) on Facebook, it received 823 hits. I think that’s one of the good things about having so many in the group, each person can share things on their own pages.

A week into the project and a good start for audience figures I think :-)