It was only while I was mindlessly scrolling through twitter , that a tweet made me sit up and realise – OMG I am so behind with this blog!

I’m supposed to be accounting for what we are doing with the ACE funding we received but I just …. I wouldn’t say ‘forgot’…. I’m just a bit …overawed with everything at the moment.

The tweet was by a group we met in Athens, about the organiser of the Platforms project we attended back in May : https://www.a-n.co.uk/events/searching-the-unknown-masterpiece and it just summed up how many connections we have made ( thanks to the funding) over the last 6 months

We’ll be travelling across to Harrington Mill at the end of the month to see the exhibition and the open studio event.  Why? Because we met and became good friends with the artists from HM…they came to our exhibition opening in Sheffield at the weekend (N0, I haven’t blogged about that yet….. :/  )  and we had a good catch up.

This is the thing about the funding we applied for… on paper it was a case of listing what we were going to do. We will exhibit, we will hold an event, we will publicise etc etc…. but there’s just so much more ‘in between’ that you couldn’t possibly plan.

Does that may sense?

For example, we went to the Manchester Contemporary Art Fair a couple of weeks ago and  chatted to loads of the artists there.  Because we’ve been connecting so much lately, we were able to find that ‘common link ‘ that we wouldn’t have had before. We know people, we’ve been places, we’ve done stuff.

So yes, Sheffield… A member of our group (Michael Borkowsky) now lives in Sheffield, so was able to hunt out a venue (The Holt) that was good for an exhibition space, but also open enough to hold events and for people to sit and meet up.

A couple of doors down from The Holt, is Bloc Projects… and just by sheer chance, another artist we met in Athens – Vincent James (represented by Paper Gallery)  was showing work : http://www.blocprojects.co.uk/bloc-billboard-vincent-james/ 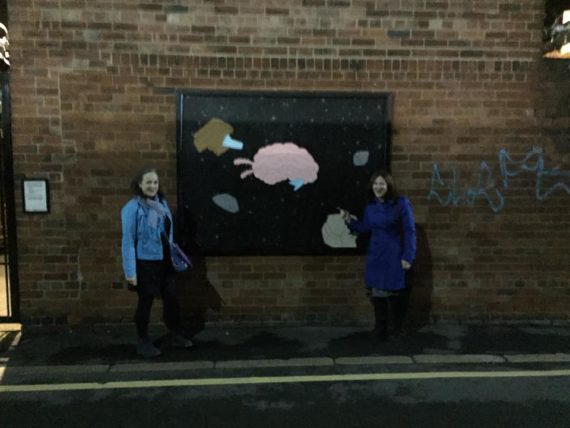 Sorry about the airhead image, but we were both so delighted to see this! 6 months ago we didn’t know this guy.

So that was October…. September we exhibited our ceramics at Tate Liverpool.  By writing about this would just be repeating myself, so its easier to just say – click on the website for images and text.  https://sciartistprojects.wordpress.com/

Phew… hope that’s up to date now. Sorry Arts Council – its just been a whirlwind. (But Thank You!!)