“Chemists have tried to imitate the chemical conditions of the young earth. They have put these simple substances in a flask (water, methane, ammonia, and hydrogen) and supplied a source of energy such as ultraviolet light or electric sparks. After a few weeks of this, something interesting is usually found inside the flask: a weak brown soup containing a large number of molecules more complex than the ones originally put in. In particular amino acids are found – the building blocks of proteins, one of the two great biological molecules.”[1]

CLICK. I flick the switch and the UV light flickers to life, buzzing loudly casting its blue glow across the watermarked white walls and lighting up the diagrams which are plastered across them. I fill the tank with the foaming solution which glows a little as it effervesces. The pump is connected and the plastic pipe is lowered into the now gently fizzing fluid. 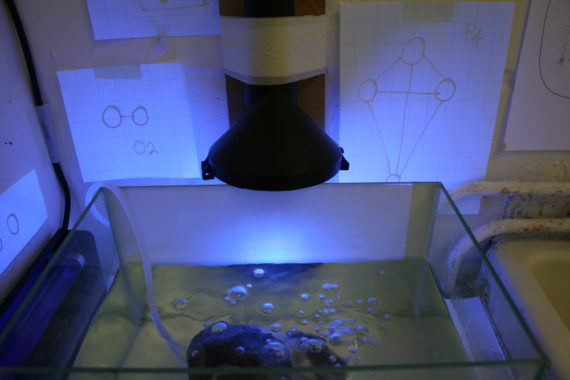 Gloved hands carry the foil wrapped parcel from its glass chamber, carefully unwrap the foil, lift the rock and lower it into the glowing liquid, resting it on the plastic tube as it sits on the bottom of the tank. Bubbles escape around the rock, massaging its smooth grey surface as if in a foaming hot tub. 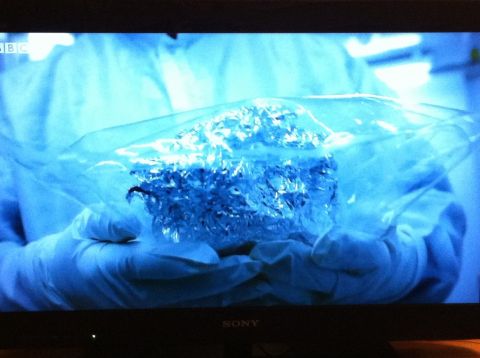 Now to add the organic compounds, sprinkling the granules on the surface of the churning fluid, watching as they are sucked down, spinning in the spiralling liquid.  I leave the process to take its course and write up my report, the first of many, as I watch each day for signs of life and carefully record any changes, however tiny, that might occur in the apparently dormant stone.

[1] Quoted from The Selfish Gene. Wikipedia says “The Miller–Urey experiment was a chemical experiment that simulated the conditions thought at the time (1952) to be present on the early Earth and tested the chemical origin of life under those conditions. https://en.wikipedia.org/wiki/Miller%E2%80%93Urey_experiment

NEXT: THE ORGANIC BRIDGE