I prepared for my Rubbish talk at Impressions Gallery Bradford and revisited my previous works Talking Rubbish / Rubbish Conversations.

I compiled a 30 slide presentation I could talk through but I didn’t prepare a script. My presentation covered some recent residencies and the Museum of Contemporary Rubbish and went through my Masters by Research work looking at the different synonymous categories of rubbish. I made a printout of some artworks I had featured in my MRes newspaper and started and ended with this slide as a point of discussion: 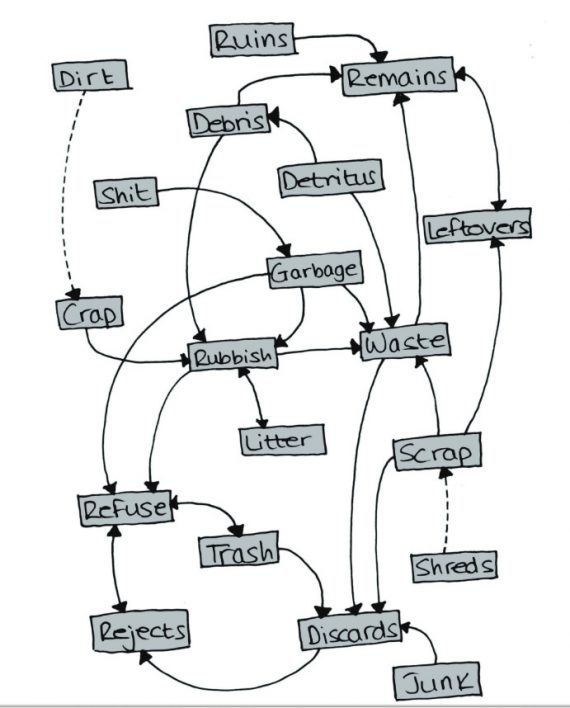 A non sequitur (English: /ˌnɒnˈsɛkwɪtər/; Classical Latin: [noːn ˈsɛkᶣɪtʊr] “it does not follow”) is a conversational literary device, often used for comedic purposes. It is something said that, because of its apparent lack of meaning relative to what preceded it, seems absurd to the point of being humorous or confusing.

This use of the term is distinct from the non sequitur in logic, where it is a fallacy.

(Entry 1 of 2)
1 or less commonly blah-blah ˈblä-​ˌblä
: silly or pretentious chatter or nonsense
2 blahs plural [ perhaps influenced in meaning by blasé ] : a feeling of boredom, lethargy, or general dissatisfaction

To begin, we discuss defining dialogue and Udit gives the following: the function of dialogue is to help the other person understand. It is giving something to another person and an extension of who you are. Udit is interested in the lack of dialogue, oppression and the complexities of gendered pscyhodynamics. He is preparing for a PhD studying politeness in British society. He mentions the Occupy movements and suggests an occupy and reclamation of dialogue. This leads us on to discuss who owns dialogue? Is it culture? Institutions? He is interested in the culture of silence as passive and active aggression and the dark side of politeness (being central to British culture). He cites Dr Brené Brown whose work looks at shame and vulnerability. She talks about clear dialogue being kind whilst unclear dialogue is not kind. Udit also recommends a book The English Patient by Michael Ondaatje depicting betrayals in times of war as opposed to times of peace. He notes that the English ‘stiff upper lip’ element of British politeness and lack of dialogue is a consequence of the war. We discuss lying and inequality in dialogue and the oppressor and the oppressed. Finally, and more generally, we discuss practising dialogue like training muscle or a skill like swimming which is learnt and must be practised to be proficient. But it’s also important to make mistakes in dialogue, Udit says, as this is how we learn.