Dwell Time were filming again today at our HQ Dwell Time Central in Huddersfield. We did four interviews on camera which were tailored to the professions of the interviewees. I made some notes and interview questions after preliminary conversations with everybody individually. In the downtime we introduced everybody and had some informal conversations. It was a good day on set!

My kids are obsessed with getting kittens. They have toy kittens and I’m aware that talking to inanimate objects and role playing can be a good form of therapy. So I had the idea to create Therapy Kitten with them to deal with trauma. 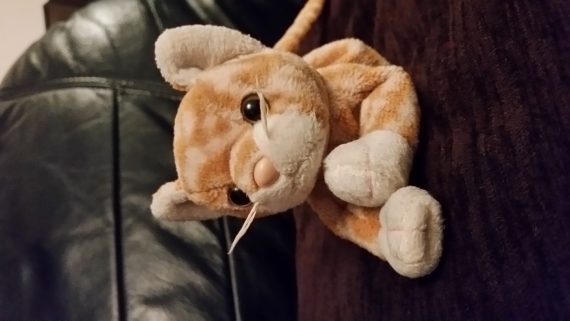 Ask Amber.
Amber offers impartial and independent therapeutic counselling. For the handful of pretend cat biscuits, Amber will actively listen and reflect back your concerns and life problems without judgement and preconceptions. Amber provides a confidential space to explore self-directed healing and change. Ask Amber anything.

It was Art Lab at Dean Clough with the new format of two artist presentations and the ‘marketplace’ show and tell in the second half where everyone can display and discuss their work informally. This came from the festive party format which was just this ‘show and tell’ informal format and went down really well so we adopted it as a regular format. I also asked the group to reflect on how the sessions were going and what was working and any ideas for improvements.

There really does seem to be a collective ownership of the group which I think is incredibly valuable. The conversations are positive and progressive whilst still being critical. I don’t think it will become a fixed thing and will always be responsive and remain in flux. The conversations will differ each time but the core ethos remains the same that it’s about conversation and positive connections.

Today I was artist-rapporteur at the Same Skies’ The Future of West Yorkshire’s Regional Democracy event. My role is to crystallise and create an artistic interpretation of the event.

There were many interesting presentations and discussions and the notes I made will feature in my drawings:

grass growing over the trailers and spraypaint

“do people say ‘hamlets’ any more”

money is not inherently useful

togetherness as a radical act

“I swear it’s a question”

give us the money and we’ll do it

all the different ways of silencing a female candidate

how do we look after each other in West Yorkshire?