The big soft pastel image has been an interesting adventure.

– I’ve experimented with stump blenders, in an effort to reduce an accumulation of finger grease that might have reduced the image’s surface bite, and prevented me adding more layers of pigment. In the end, I have used mainly my fingers, as they’ve been too dry with chalks to be particularly greasy, and I can keep the finish smooth, which seemed to look better. The stumps had a tendency to bite and disrupt the pigments, leaving a visible scratchy effect that did not suit the tracing paper.

– I’ve struggled to work my image horizontally, knowing I will display it vertically. 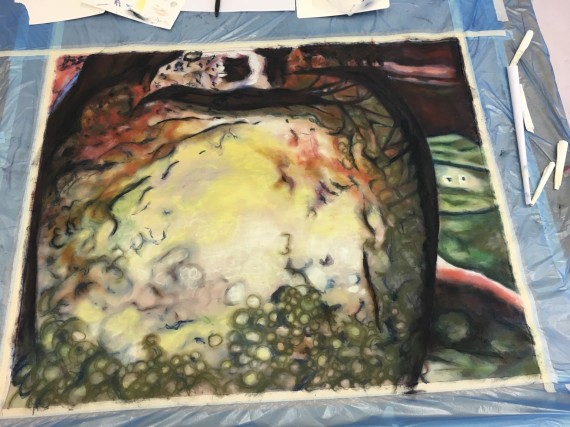 – I’ve had to cope with the paper buckling under layers of fixer, and develop a plan to counteract this. I spent time considering why this bugged me – after all, I like the buckling and tearing in some of the smaller images I have made. Finally I decided that I rather liked a gentle buckling, but still wanted the image to hang reasonably true once it was vertical, so I tried to keep buckling to a minimum. 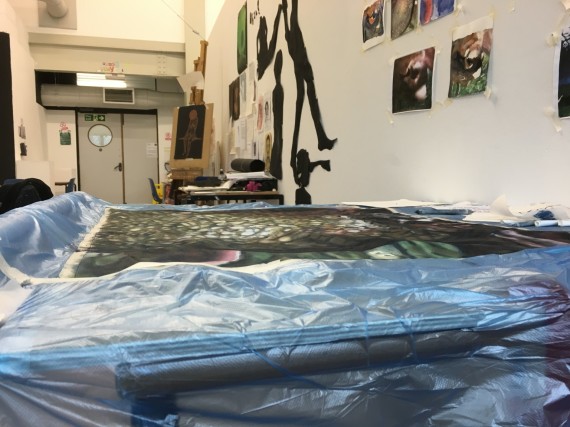 – I’ve had to continue building the image on its fragile support not knowing how rich it will be once I separate it from its board and let light flow through it. 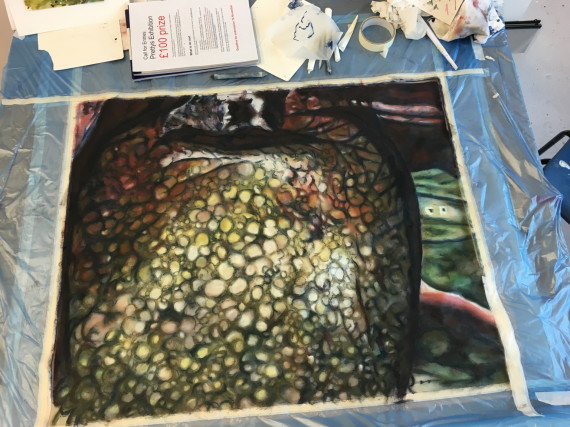 And, once I finally finished it, I had to separate it from the board, spray fixer to its wrong-side in the hope that buckling would settle, protect its surfaces then weigh the whole thing down to help the paper relax.

The image has a slight ripple, but is rich in colours yet translucent and vivid with light behind. I’m rather pleased with it. However I have a new issue. This is a fragile thing. I want to include it in my degree show next June (well, I think I do at this stage), and I need to keep it in good condition. For now I decide to roll the image and its long trailing end and pack it away in a cardboard tube for now. After all the fuss and effort of making it, this seems a weirdly final end to the process, but seems the best way to look after the piece until I have decided how to display it.