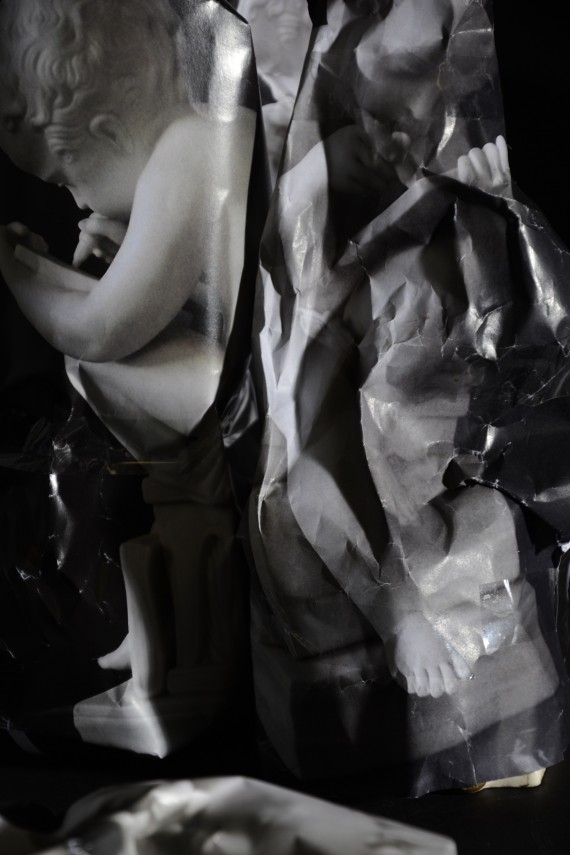 The tour was given by two of the participating artists Jade Simpson and Vicky Roden http://vickyroden.com/with curator Lisa Beauchamp.

I have followed New Art West Midlands since it began in 2013. NAWM showcases the work of selected graduates from degree and masters Fine Art courses in the region. I really wanted to get an insight into the kind of work on show and the ideas behind it.

The tour gave me the perfect opportunity to look at the work and meet some of the participating artists. All of the artists taking place have graduated in the last three years.

Jade Simpsons makes large sculptural assemblages that represent modifications of animals – they feel like fairy tale or imaginary creatures made real. Jade explained how these creatures are based on real, imagined, extinct and microscopic animals. She is interested in morphing different creatures together, in creating gigantic animals from insects and microscopic species.

Her work has a playful yet sinister feel and is created using found materials in a make shift way referencing the back rooms of galleries and museums where sleek display cases are replaced with rough wood and palettes.

Jade’s set of influences is very broad – from natural history to sci-fi, shamanism to anthropomorphism. But this broad base of ideas didn’t confuse or dilute her ideas or the finished work. I was struck by her ability to articulate a range of ideas in such a coherent way and her use and exploration of her chosen materials. I found her work very playful and engaging . Jade says that having seen her work in the large gallery space she hopes to make much larger work in the future.

Vicky Rodan’s work revolves round the child’s toy the ‘sock monkey’ remember them? She called her figures‘poppet simians’  – simians literally meaning relating to, or resembling monkeys or apes. Vicky articulates ideas about the human condition, her interest in literature, classic story telling and modern day stories through the creation and ‘activities’ of the simians. The simians vary in size and once she took two six foot tall creatures on the train – surprising the conductor as he lent over to ask for fares! Intervention is an important part of her work. The image she submitted with her application for NAWM showed a large black and white stripy simian in the  Dhuvra Mistry’s fountain The River (1994) in Victoria Square (known locally as the ‘Floozie in the Jacuzzi’) and this is what attracted the selectors. As much as Vicky articulates ideas through these little figures so the audience responds to the environment in which the figures are placed in a new way. One of her large figures lies limply  in the arms of Jacob Einsteins, Lucifer and causes visitors to stop and look and to compose their own narratives. Vicky explained how she was incredibly excited to be invited to make interventions with two works by Epstein in the museum. She had a particular interest in his work held at the New Art Gallery having been brought up in Walsall.

Both Vicky and Jades work is  very strong and the insights they gave added greatly to my understanding and viewing experience .

In both cases the artists have clearly been given a fantastic opportunity to make and show their work with the involvement and support of the staff at the museum and NAWM. More of their work is on show at The Barber Institute and the works tours to other venues in the region until the end of May.

The exhibition showed a range of work-sculpture , video drawing and painting – the sculpture being linked predominantly with the use of found materials. Coming up to graduation myself it’s interesting and valuable to see the level and content of work by recent graduates in the region.

NAWM have a series of events including two further artist led tours on 20th March and 15th May. Tours cost £3 and there are  plenty of opportunities to take photographs of the work and to ask questions! 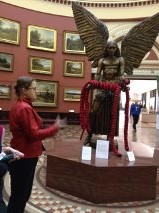 As my children’s half term was last week and I took the time out of college to be with them I compensated by going into college the week before in reading week! The place was very quiet but it was great to keep the flow going. I was helping out with students coming for interviews that week too so actually there was a fair bit of activity for a couple of days (I’m a student ambassador and this is one of my roles). Its really interesting meeting prospective students – most of them a little nervous (understandably so) but also wanting to gain as much information from their visit and interview as possible. They are about to make a really important decision as regards the next step of their education. And for many it will mean leaving home for the first time – an exciting but testing time.

So now back in the studio its great to actually get making again and take time to reflect on my progress so far. Before my break I made ‘re-visions’ to some ornaments that I picked up in my local furniture barn. I have altered my terminology from ‘appropriated’ to ‘revised’ after a conversation with my tutor. its all about what I am trying to communicate and the ‘revision’ of objects suggests that  I am altering them in order to express ideas about my past, the meanings we impose on objects and their powerful ability to summon up memories most vividly.

I was talking to our external examiner today and she remarked on the familiar nature of the objects ( the sort of thing we all associate with ‘grandmas house’). I’m interested in how we shed some objects (destined for the charity shops)and keep others. What informs our decision making – are these decisions sometimes quite fickle? So I have wrapped, bound and painted the objects – now changed – what meanings do they hold? Where will I go next with them?

And I am continuing to draw whilst making as part of a parallel process. This part of my practice is really challenging as I judge my ability to draw and to use paint very critically. The result is moving on – I am getting more confident with my drawn line and use of paint. The paint this time is about areas of colour that work together to create movement through gesture and proximity. The drawn lines are gradually becoming fluid and relatively accurate to human form. I ‘m hoping that these two quite disparate elements are beginning to work together in an awkward and yet unmistakable dialogue.

I noticed on Twittter an exhibition called Vestige – Coates and Scarry –  about our relationship to objects. In particular I’m fascinated by the paintings of Lisa Wright and figures by Penny Byrne. The work by both these artists ask questions about the meanings 0f both cultural and personal artifacts, playing on historical and kitsch references to painting and ornament.  The work introduces contradictions which create dialogues about perceptions and the reality – or otherwise – of historical ‘fact’. I’m very interested in this whole idea of the ‘truth’ of past experiences, the ‘truth’ being in many cases highly subjective.