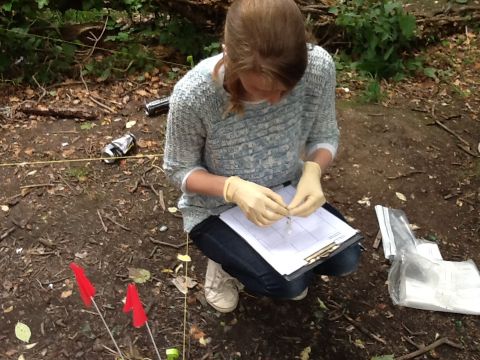 I’ve been sorting through my finds’ list this week, checking descriptions and possible categories, attempting to group things and doing an initial scan for trends and relationships. There are so many things that I collected that are small parts of a lost whole, little snippets of something unidentifiable and non-categorisable. Shards, fragments, pieces, parts are all words that continually arise and leave me wondering about the rest. These edge places are the place of the fragments, the broken and the left behind. These are the things that no one misses or ever knew they had. They appear to be the bits and pieces washed up on a social undercurrent; a kind of flotsam and jetsam of the town

So all my gathering is now done. I have amassed a mountain of bits and pieces, gathered information and recollections, photographs and video, notes and sketches. Now the serious work starts and the serious questions…. what to do with it, how to make sense out of it and how to bring it to a point of presentation. It is information without form and holds the potential of many different outcomes and readings. First on the agenda is making sure all this information is organised. I’ve been checking all my find listings, altering and updating descriptions since they’ve been cleaned and working on their categories. I want to photograph each object and record it as is done in the field of archaeology, using scale rulers and labelled descriptions. I will then be deciding on the objects that require further inquiry through a drawn study. Along with this I need to decide on the maps that will be turned into final drafts, which will then be discussed with the Cartographer. It feels like a rather daunting work load but I am certainly excited to be getting to this part of the project, where discovery lies at my finger tips.

So I have reached my fourth and probably final site in this project. It is an entirely concrete place, I guess swaying to the more urban of my rural/urban band but in its own way as mysterious as the rest of them. The concealment comes in the form of an underpass beneath the A1 (M) and this concealment is enough to attract a number of visitors, as the evidence suggests. So on a rather chilly day I make my way along the footpath beside the playing fields, running parallel to the motorway and wonder what might be waiting for me this time. Earlier on in the project when I came on my initial field walking expedition, I was quite surprisingly confronted with an abandoned, burnt out Escort van, sat right in the centre. It had caught me off guard. Blackened and charred, with blown out windows, disintegrated tyres and smashed headlights it sat discarded, yet acknowledged baring the ‘POLICE AWARE’ sticker on the bonnet. I had stumbled into a real crime scene of sorts and on this deserted footpath, with the noise of overhead traffic reverberating around the tunnel I felt an eerie shiver from this strangely sinister view. A short time on a man came along and clearly as taken aback as I had been on first view, exclaimed a profanity, had a quick inspection and hurried on by.

So I knew this vehicle would have since been removed and indeed on return last week I see it has certainly long gone. All visible trace eliminated. I got on with the task of marking, collecting, logging and photographing. This site requires a slightly different method of excavation and an important part of evidence I want to examine is the graffiti. Therefore I had to map each part of the walls and record a photo of each section. There are a mass of marks upon the two walls, a past layer has been washed over, possibly when The Green Way was set up, but much more has appeared since. A general overview tells me that pretty much all this graffiti work is not exactly a labour of love. I guess to my untrained eye this would mostly be described as your usual amateur stuff but to look more closely may reveal a few surprises maybe. What conclusions can I come to beyond, who loves who and what their mum did last night?! Who knows…?

I’ve nearly now washed all the finds collected so far. I’m up to number 310 and still rising. It was very interesting to get involved with the Norton Community Archaeological Group’s find processing last Wednesday and in many ways quite similar to my own processing (as of course I am trying to make it so). It is fascinating to consider the physical and metaphorical journey that the object is taking as it travels along this process from dirt in the field, to treasured artefact. As my husband tentatively questioned the other week… what might I do with my finds once this project is over? I reacted quite defensively – insisting that they would not be binned. I think he was disappointed by this and is slightly concerned that they might become a resident in our home at some point in the future. Hopefully it won’t come to the ‘it’s them or me’ scenario!

Last week I was invited to go along to meet up with the ‘Friends of Norton Common‘ where they were working on clearing an area of undergrowth towards the Icknield Way side of the Common. These are the very culprits that have been tidying up my potential finds and clearing away precious evidence. It was easy to forgive such differences however, especially so as they kindly offered me coffee, biscuits and mince pies whilst enthusiastically offering to help me in anyway they could. It was quite enlightening actually and I discovered a bit about the tent that had started me on this trail in the first place. It was in fact them that finally removed it after walkers had mentioned that they felt uncomfortable walking by, worried by who might be lurking. It had supposedly been there for a good few weeks and seemed not to be in use anymore. They suspected it had been used for a party. This kind of adds up with some of the finds I’ve uncovered but not others, and not the report from my aunt about a man near by. Maybe that was just coincidence after all. Anyway, as I gather all my findings together maybe I’ll be able to draw out some conclusions on this. I also could tell them a bit about my findings over at The Pudding Basin. It isn’t an area they’ve really looked at and they certainly weren’t aware of the old mattress I discovered, half buried in undergrowth and greening with moss.

It was also good to get an insight into their motivations for volunteering to do this kind of work, which seems to range from a feeling of responsibility because of its proximity to their homes and also its identity within the town, to an interest in the wildlife and fauna, and probably most come for a good day out, with a cuppa and a biscuit with some very nice people. I could certainly see the appeal and must say it was a very enjoyable morning! (I shall forgive them their tidying for sure!)

Tomorrow I’m off to help the Norton Community Archaeology Group with their finds processing from the summer dig at Stapleton’s Field. It will be very interesting to be a part of their finds cleaning process and compare it to my own that’s going on at the studio at the moment. I’ve been told to bring a mug – a chance for more tea is always a good incentive!

A new year starts and I am trying to shake off that holiday feeling and get back to it. Before my week off I had an excellent couple of days in which I had one of my excavations at Norton Common filmed by fellow artist Jo Taylor. It made rather an unusual change to have someone else along filming me and thankfully it ended up being a really interesting excavation with some notable finds. I was doing a section of the Pudding Basin at Norton Common. As soon as we arrived, snuck under a bush and into its base we were greeted by the sight of a Muntjac Deer moving through the undergrowth over on the far side. It felt like a charming start to what was a crisp and sunny morning.

At first inspection I wasn’t sure there was much to find but after marking out an area 5m x 6m around about the centre, things began to emerge. Jo filmed and I wrestled with my external reactions when quite soon into the excavation I spotted a number of hypodermic needles located around a tree stump within my marked area. My first reaction was to just pack up and leave. What on earth was I doing poking around in places that should just not be poked around in? My second reaction was to just carry on but ignore, avoid and pretend they weren’t there. In the end I resolved to deal with it and very carefully flag, bag and take them as finds. I didn’t take this decision lightly and now I have two potentially hazardous finds in my collection that make me feel a little out of my depth. I guess I expected that these might be the kind of things that would be left in these places but actually coming into contact with it in one of the most public and central sites I’m working on, somehow makes it feel more unsettling.

We also almost got attacked by someone’s dog, or it felt like a possibility momentarily as we were barked at from the main clearing. Both of us froze and watched as a large retriever tried to alert its owner to something suspicious going on in the bushes. He was called away, and the owner did take a quick look, meeting the scene of camera rolling and me, gloved up, crouched down, in amongst a sea of pink flags. Whatever he thought he wasn’t hanging around to ask questions.

It was an eventful morning and I’m preparing myself for another visit to the Pudding Basin soon. The other area at Norton Common that I’m looking at is where my aunt discovered a tent a few months back. I’ve excavated this site in several locations and believe I have found some evidence of inhabitance but the clues left have been sparse so far. I may carry out one more area excavation if I have time before this part of the project finishes at the end of January. I am currently crossing over sites as I have now started my final site, the underpass beneath the A1(m) towards Baldock. 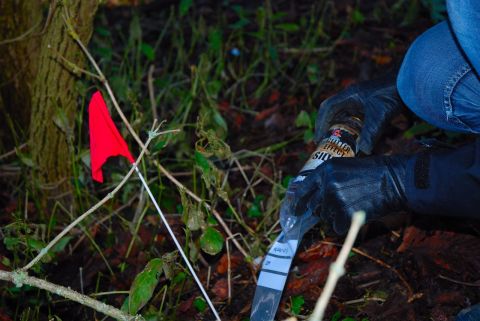