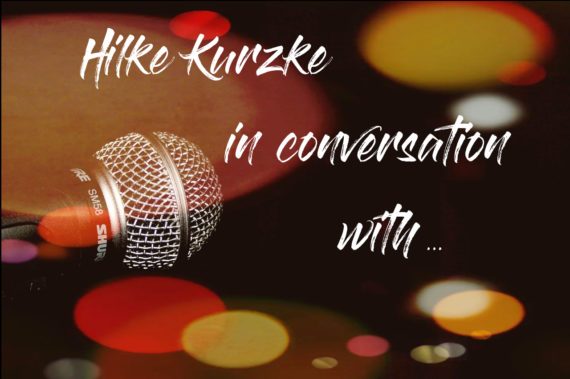 [above: Sarah Tutt on the day of the interview with her work, (photo: H. Kurzke)]

Sarah Tutt is a visual and performance artist from Nottingham. I first encountered her large-scale asemic ink drawings, hanging on the wall of the large, open studio space at Backlit Galleries shared by recent graduates of Nottingham Trent University. This was in pandemic times, so all I could do at the time was to leave a note on her desk. We eventually managed to meet up, and I was lucky enough for her to agree to an interview. She is now coming to the end of a residency at Loughborough University and is preparing to undertake a PhD at Nottingham Trent University in October. Fort his interview she invited me to meet her in the attic gallery space of On Thoresby Street, where she was documenting and evaluating some works from her residency.

Well, let’s dive right in: Can you tell me where you come from artistically?

Originally my practice was performance. My undergrad was in Contemporary Arts at Nottingham Trent University; the course offered a combination of performance and visual art. It was truly inter-disciplinary, and that approach underpins my work to this day. After Uni, I ran or worked with several performance companies for many years.

And you were successful in your work! You won Barclays New Stages Award for Best of New British Theatre, you toured, your work was commissioned… What made you leave theatre?

I became a mother and moved to France and lived abroad for many years. Theatre is a very heavy practice: You need storerooms, you need props, you need all these kinds of things. When I moved abroad, I left all that behind. I only carried my laptop and writing became my output. 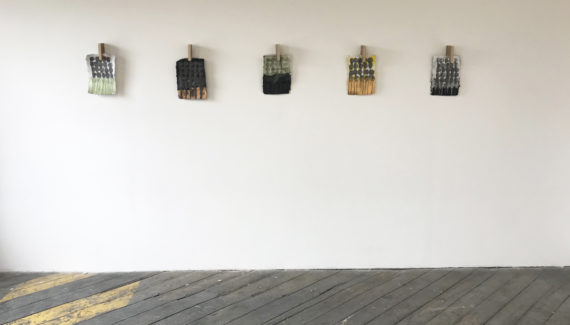 Would you say, this performance and writing background influences the visual art that you are making now?

Yes, writing has always held a position in my practice, be it for performance, in drawing, for research or simply writing as its own art form. How it shows up can be very different, sometimes it might be in the choreography of the hand in mark making, which is very similar to writing. Sometimes it might be that I’m using language in order to generate practice.

My art making is process lead, and I have a material-based practice. I go through a period of investigation where I explore what the material can do. Not in the same sense as a craftsperson might, but exploring how materials and artist might perform together. It is a process that invites failure in. It’s a feeling-out stage in which I note the gestures that are used, and then takes those gestures and make them into a formal instructions that are used to make work.

The work that you see around you now has come out of residency at Loughborough University, where I was exploring paper and making paper for the first time. And what I realised when I was working with papermaking was that the unique gesture that came out of that was “press”, which then became the formal instruction that I used to make all these works.

When I look at the artwork hung here, I see four distinct … – should I call it bodies of work?

…different forms of documentation, I would say.

Should I view these different forms of documentation together, in a sequence, or all individually?

There’s no sequence here, because often I find it useful to work on more than one thing at a time, and that’s to do with the rhythm of experimentation and the failure that comes naturally with an experimental approach.

What I do is, I go into the studio and start working, and something emerges out of a process. And by working on one piece, I can have the head space to reflect on another. Whilst making the various works of the series Press, I also worked on this very detailed piece [points to a large sheet of paper with intricate marks; photo below] over many weeks. In this way, I would be going back and forth. 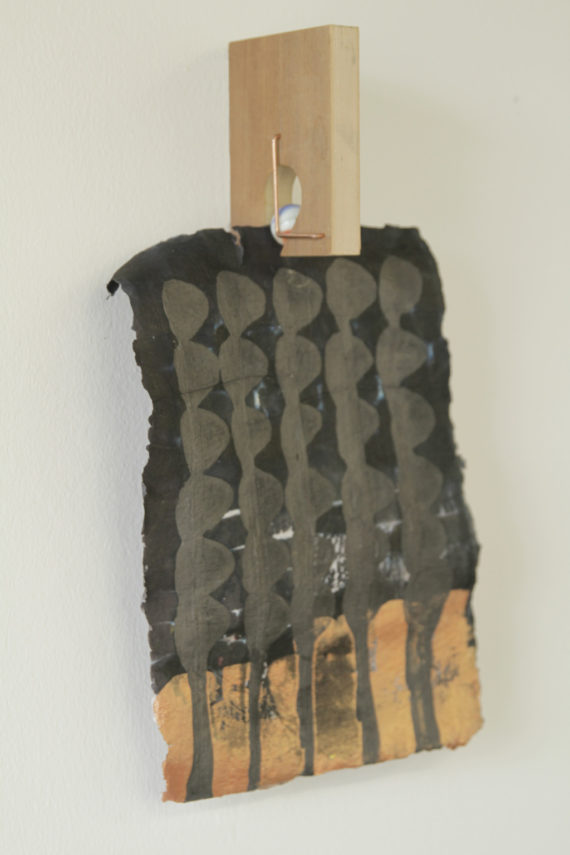 Let’s take a closer look at the sheets hung on that wall there (series Press). Do you see these drawings as the finished art? Or are they leftovers of the true art which was in the process of making?

Sometimes the process is important in exhibition. That’s when I will go into the gallery space myself and stage an intervention. But more often the exploration of a material is a private act, and what I show in a gallery are resulting documents of that. I think the tension between the absence and the presence of the artist is always there in my work.

This is why I’m interested in the unruly line. By this I mean the line that happens by chance, by misadventure or by response. It is often the unruly line that holds a document of a live process and a relationship between materials, gesture, time and repetition – the key themes I work with.

If I was to describe a main impression I have of this work, I would be talking of dots in a grid rather than lines…

These particular pieces here are all made with the gesture of press. So the mark making stems from this gesture and a line is released. The drip from that pressed dot. This is the unruly line I am searching for.

The grid comes up in my work as a way to hold something unruly. The choreographic process of repetition and order is important in my practice as is the friction between this order and chaos.

During my residency I engaged with papermaking for the first time. Papermaking is such a physical, wet and dirty process, you are constantly soaking wet, you’ve got Wellingtons on. There’s this constant wetting, drying and pressing. And so these processes got carried over into the process of drawing, with the finished drawings finally pressed in an industrial press several times.

I began to reflect on what would happen if I gave agency to the paper to dictate the surface, so instead of pressing it, I allowed the paper to dry naturally by suspension, which dictated the form of the dry paper surface, which in turn gave rise to the nature of the unruly line in the work. As I was placing the new sheets of paper to hang on these ball drying racks that you find in print workshops, I noticed what beautiful objects they are in themselves and that, when the paper was suspended in them, they acted as a kind of frame…..so, from there I developed the idea of making ball drying racks both part of the process of making and part of the made object in exhibition.

And after applying the calligraphy the papers were then dipped in paint by the look of it?

They are not dipped. Everything is made with the gesture of press. In the process of making these I spent a lot of time searching for the right medium to use with the material. And much experimentation went into the process of finding the right balance between the material, medium, tools, and gesture to use.

I made my own paper from cotton linters, and thus it has this high absorbency. The first thing I learned when applying drawing was how greedy it was compared to store bought paper. I tried many different inks and substances before I landed on a mix of wax and graphite that held and released the unruly line in harmony with the scale of the paper.

Initially, I approached the paper with larger pushed gestures, working with bigger brushes. But the work was unresolved, and I didn’t understand why until I sat back and realised that the paper already contained a strong line – that of the deckle edge. I then started to find a harmony between materials and mark.

As to the added colour, I don’t often use colour, as I’m drawn to raw and organic materials and favour the quietness found in monochrome. I had just been to see some work by Derek Sprawson, and one work in particular grabbed me. I found something in it that was both quiet and used colour, and it inspired me to investigate. 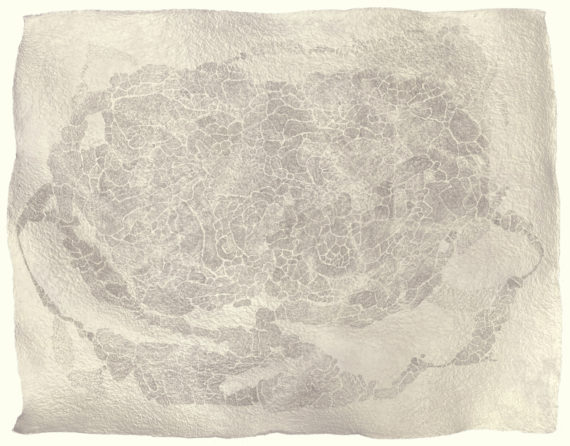 This work here is very different. On first sight and from the distance, it looks almost like a city map to me. But looking from up close it looks fractal in that the drawing repeats and emphasizes the pattern and texture of the paper on a smaller scale. And the individual lines remind me of the process of hatching…

When I started to make paper, I was quickly drawn to the different personality of the paper that you can make: either incredibly fine, ethereal, flimsy material or big paper like this which is just so robust and hard and stubborn.

I thought I might work very differently with it. The bold marks I initially tried just didn’t call to me, whereas, as soon as I started to work in fine detail, it just felt right for that particular paper. The scale between surface, lines and marks became very important in this whole project.

In the way this is done here, the absent line that becomes the unruly line, the spaces in between.

Often with my practice, the particular projects I’m working on remain unfinished or unresolved. What happens is, I just move on to something else: I move between projects anyway, and it might happen that another idea starts to excite me more. And so I may go back again or not. This ties in with what you keep and what you don’t. [Remark of the author: she is referring to the outcome of continued experimentation.]

This larger work is not a work that I particularly think is finished. But it’s not calling me to make any more marks on it yet. But maybe one day I’ll come back and add to it. I don’t necessarily think it’s a resolved piece. But at this time I think it’s resolved enough.

Thank you very much for your time and patience, Sarah!

If you you want to check out more of Sarah’s work, head to her website or instagram stream. If you feel moved to explore work for sale, you can find some on her webpage here. 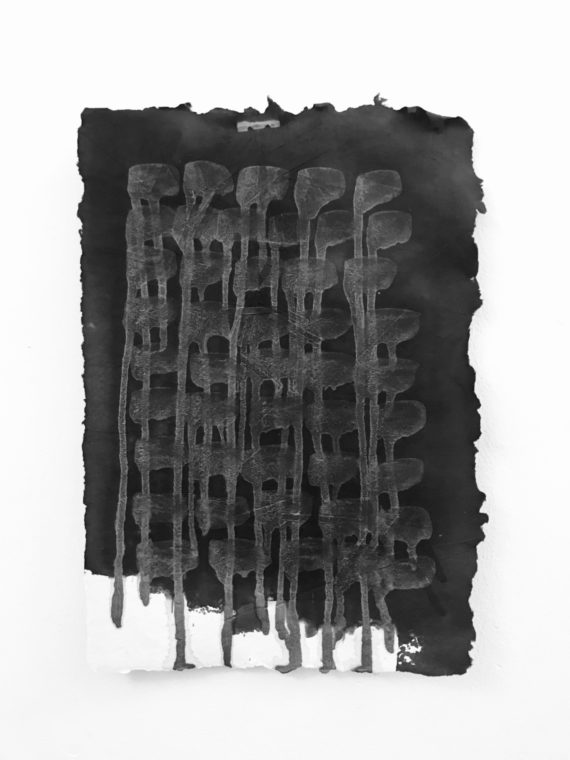 All images were used with the kind permission of Sarah.