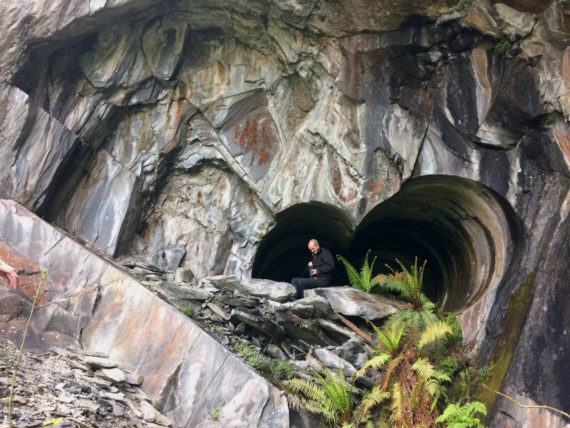 Our plan for Saturday was to go up to the adits and do some recording. Meeting Lee in the Stiwdio Maelor kitchen, he pointed out it was raining and taking recording equipment out in the rain was not a good idea. Okay – plans have to change. The current artist in residence at Maelor is Lacey Hawthorn from Canada who was turning 31 today. So we made pancakes (crempogau in Welsh) with real Canadian maple syrup (in a tin from my last trip to Canada). Over breakfast we (well Lee) decided that today we would work on the computer – three hours of learning Audacity. Lee is a great teacher, very patient and explains everything really well. We put in some sound files from my phone, took out the hissing sounds (noise reduction), cut, pasted, joined files together, made recordings (lesson to learn how to use the mic to record the spoken word) of Lee saying Welsh words with a south London accent. With my head spinning with all the new terms, possibilities, I headed into Aberystwyth for the graduate show. More learning tomorrow and if the is weather nice, a visit to the adits.

Our first job today was to go into Aberystwyth and pick up the equipment we needed from the School of Art. They had nearly everything we needed, so we took it down to my studio and Lee explained each piece. He preset the marantz so when we go somewhere to record it is already to go. After a tour around the art school, a stroll on along the beach we went to the Old College. The conditions being perfect (no wind, sun shining, seagulls not yet nesting), we were able to go up to the top of the tower led by Steve one of the porters. Seven flights of stairs, round and round we come to a shabby wooden door and through that out into the bright sunshine, with an amazing blue sky and 360 degree views of Aberystwyth and the Wales coastline.

Our next stop was Borth, about 9 miles from Aberystwyth and on the coastline. Leaving the car I draped the equipment over me. There was loads of wires and I tried looping them around my waist. We did some recording on the beach. The sound of the waves was too much for me, but in the rocks I heard a trickle of water and tried to record that. There was a lot of noise from the waves and the wind (even with a cover on the mic), but Lee talked about ways to combat that and taught me how to do the levels etc. I tried to get the mic down between the rocks to get closer to the trickle but with the unfamiliar equipment and the wires I was worried about balance and dropping something in the ocean. The recording I made has moments of the trickle with lots of static and sounds of the waves in between. Even though I didn’t get anything useful it was a good learning experience and tomorrow is another day…..

From Lee: My first day back in Corris has been excellent. Veronica and I walked to the local adits (mining bore holes), which were drilled into the face of a local defunct slate quarry. The reverb inside was excellent and unlike that in any other tunnel that I have been in and I can’t wait until I am back there with a recorder.

Back at base I have been loading new software onto the studio computer and we have been talking about where Veronica wants to go with this project and what we need to get done in the coming days, the day concluded with a gong bath at the Corris institute so all in all a great start.

From Veronica: After a late night to meet the train, we woke to a slow start. Lee did some TaiChi and I went for a run. About 11am we came together to start work. So how do we get into the project? Where to start? With notebooks and pencils we skirted around what we wanted to do and achieve. The sun was shining outside (rare thing in North Wales) so I suggested a walk to the ‘Italian Village’ and the bore holes. The bore holes is an amazing area – it has a path curving around the side leading down to a shallow waterhole, at the moment filled with tadpoles. Surrounded by enormous quarried rocks, it is like a natural amphitheatre. We sat near the waterhole and pondered the life of tadpoles and then Lee climbed up to the boreholes. I sat on a rock soaking up the sunshine. Next thing I heard was the most amazing sounds as Lee explored the acoustics of the boreholes. Walking back down the hill we were suddenly fill of plans for the week. The ice has broken the project has begun.

I have spent the past week chasing up the equipment Lee has suggested we need to record sound in the studio and outdoors.

This is the list:
a digital recorder (with windshield for field recording if it has built in microphones) or a digital recorder and separate microphones (again with windshield / Rycote for field recording)
headphones for monitoring
A condenser mic (or similar) and stand for indoor recording
cables to connect microphones to recorder
cables to connect the above recorders to a computer
cables to connect the above to sound sources with a ‘line out’ capability
I have no idea what most of this stuff does – but am sure I will by the end of the week. I will be fluent in sound equipment!
To acquire the equipment for the week I had to fill out a risk assessment form for the School of Art – seven pages of questions that responded to things like ‘Describe who may be affected by the hazard, how an accident may occur and what kind of injury they might suffer.’ I’m really hoping there will be no hazards and no one will suffer an injury in the creating of sounds. With Lee arriving tonight (11.03pm) it turns out I can’t get the equipment until Friday. But as they say in Wales – dim ots (doesn’t matter) – we can spend Thursday planning our week together, catching up and maybe see what sounds we can record with basic equipment – like our new phones!