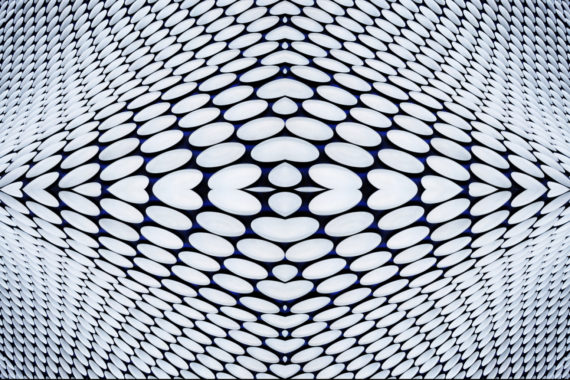 I am a painter / video-artist making work based on landscape and the “sense of place”. I am particularly drawn to worlds with a hidden history.

The carborundum prototype plate worked well – there is something about the texture and surface of the dense ink when printed on paper that is luscious and seductive, so I’ve decided to make the final plates using this technique.

Aware that all areas of the image must hold the viewer’s interest, I have created a crackled surface for the rest of the plate, the negative space in fact. It is important for an image to work visually from a distance, but also close-up; so, from a distance, the viewer will recognise the depth and 3D nature of the pattern and when viewing closer, witness an intricate surface.

Wrapped up in this issue is that images must have ‘presence’, that inexplicable attribute that makes a piece of work worth looking at and a strong impact. Also, given that my final prints will be enlarged when reproduced for the final format that the public will view, it is important that the images I create are not small – I want to cram in as much fine detail in the texture and visual interest as possible. It is very important to draw the design with accurate symmetry, if it is a bit ‘off’ it will look dreadful and it is essential this drawing is not lost and generalised when the glue and carborundum are applied. In addition, the contrast between the almost mechanical accuracy of the design and the quite abstract nature of the texture is important for the image to work and to touch upon that ‘presence’.

The large carborundum plate I produced this week (125 x 145 cm) has been a steep learning curve, given my new press, and now I know what doesn’t work. There were many technical difficulties including the press pressure lacking the evenness necessary, length of time to ink the plate (5 hours, wiping differently for both a fine crackle texture and heavy carborundum), dampening a huge piece of paper (in the garden using a hose) and printing before it dried out…

With less than a month to complete the series of prints, I’ll be hard-pressed to complete what is necessary, but I have decided to create four new plates, a little smaller than the current plate to enable the press to apply even pressure over the paper and to avoid working at the edge of what is realistically possible; but, the plates still have to be large enough to possess that overall ‘presence’ and large areas of fine detail to grab the viewer’s interest.

So, the plan of action is to make a series of carborundum plates together – all variations of the current plate. The procedure is extremely long, but this approach should speed things up a little. I will also create the crackle texture over another additional plate which will be inked up separately resulting in the final prints being created from two plates – hopefully this will help sort out the uneven pressure of the press… but it also introduces a registration issue, in the scale of things though, worth the effort I think.

I am on a train writing in an old note book… serendipitously, at the back of which are pages of recipes for collagraph plates I made at the RCA, these have spurred me on to make a few experimental plates in addition to the prototypes of last week. If the surfaces marry well with the shapes and patterns of the subject matter, great, if not, perhaps they’ll lead on to something else.

Distance is one of the most important and overlooked aspects of making art: once I have created an image I need to separate myself to enable viewing it with fresh eyes. Following an intense period of image development (video and photographs), I have purposefully stepped back. This space and time has now made it clear the direction the work must take.