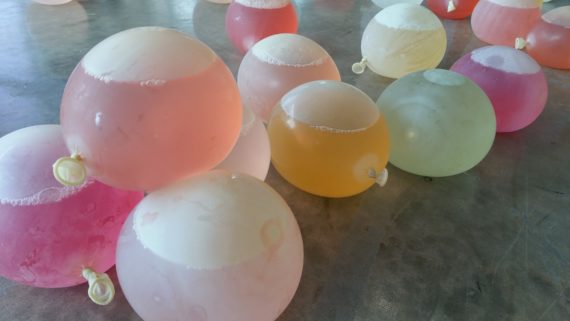 There seems to be a common thread that resides in my current work; how I engage with ‘ready mades’ that are of an industrial nature and using materials to create sculptural forms. I’m currently exploring the notion of space and site, challenging the work to see how it inhabits an environment. I can clearly identify an inside/outside aesthetic to the work due to how some forms resemble body parts, limbs or elements of the body in some way. The continuity and physical experience for both the artist and viewer is alluring. Is there a connection between human and landscape? What I’ve discovered recently is how weight plays an important role in the process of creating these installations. There is a shift between the use of the buoys, rope and the foam or hessian. My interest lies with the notion of control and non-control of the work. I manipulate certain ways the objects sit or reside and how the forms engage with one another; however I allow the work to breathe and accept their natural qualities. The work has a raw, a rough quality and nature on appearance.

The group tutorial yesterday was a fantastic opportunity to exhibit the work in the space that I had been working in for two days. What was interesting was how my piers and Mark commented and discussed work before asking what the work was about; this gave a new insight to how people understood the work. We discussed how the work came across as violent yet soft; the use of butcher’s hooks translates aggression and death. The foam forms have a much softer appearance, both of which were suspended with cord and large, thick rope. There is a clear distance between the works, yet still seems connected; this could be down to the use of space. What was an interesting comment from Mark Gubb was how the work reads as painterly. This raised the question of how exactly does the work read, is it sculpture, installation or even a painting? Can it be read as all three? Is there a narrative? Is the work connected? These are all questions that were raised and allowed me to think and analyse the work from both the perspective of the viewer and the artist.

What instantly came to the group’s attention was how clear the work read from a western sense of reading from left to right. However this isn’t an element that had crossed my mind. There’s that contrast of control and non-control tendency of the materials and fixing of the objects. What I had explored differently in this space was suspension of work and lighting. The arrangement of the work suggested a hostile quality and an uneasy sense of confinement in such an open space. The use of lighting created an alluring quality, however some felt that it disconnected the work. This was an interesting point to mention and a curious analysation. The element and quality that interests me is how the work reads as either or both masculine and feminine; the exploration of gender using stereotypical associated objects is a continuous point of contact in the work. 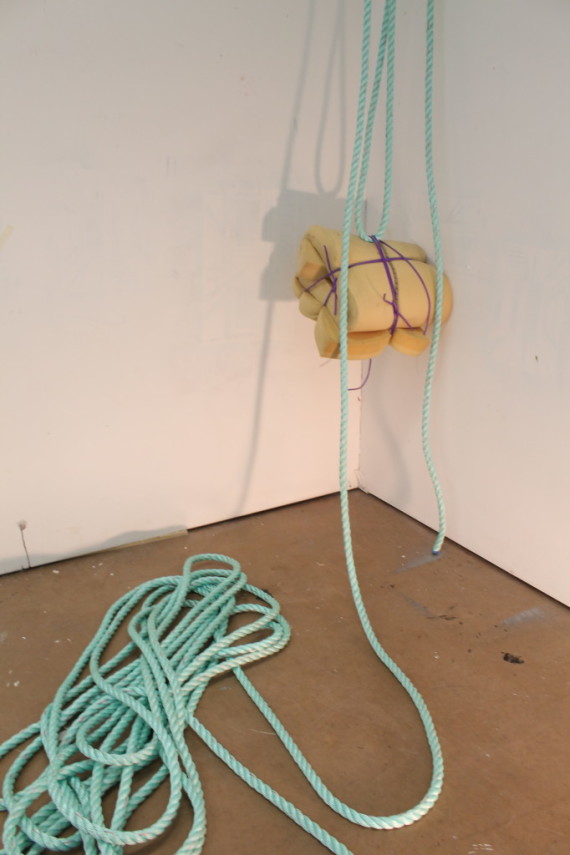 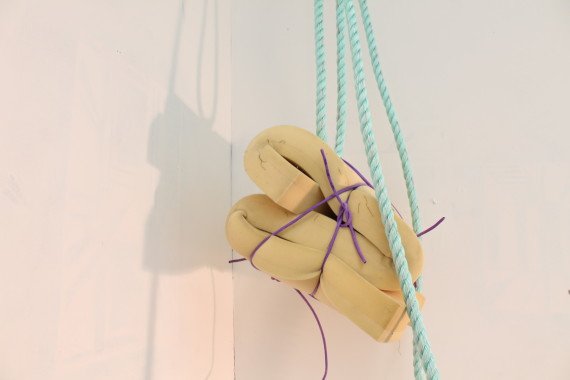