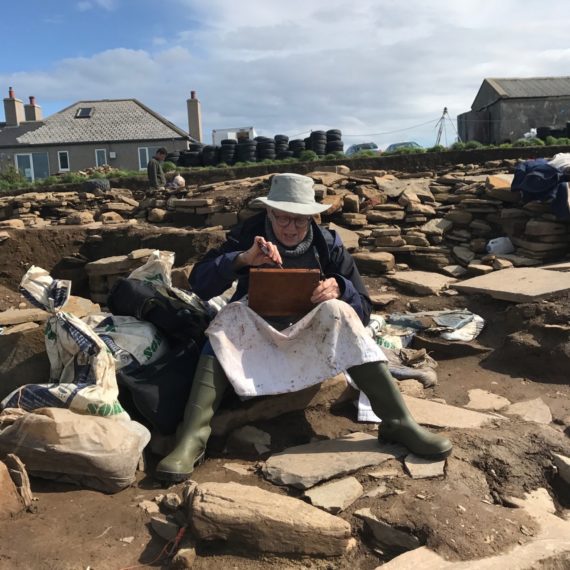 A certain buzz associated with new discoveries on site today. Week 5 of the 8 weeks has been mentioned as the peak of the dig, and it certainly feels like it.  There is still time to explore before the pressure of getting documentation completed hits in weeks 7 and 8. 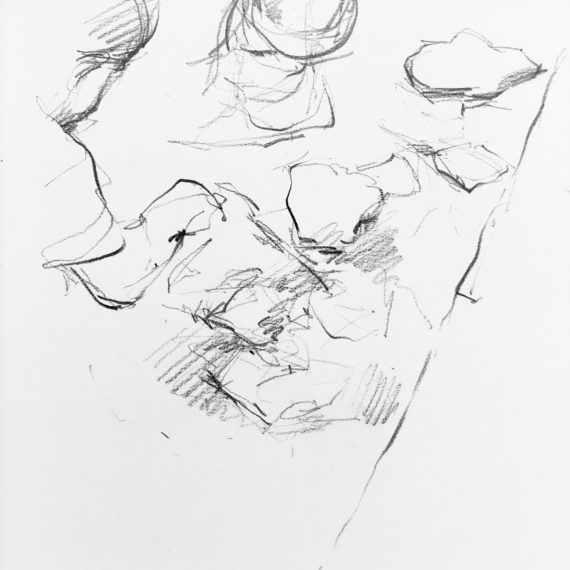 In Trench X they are excavating a huge pot, potentially the size of a bucket, which appears to have been dropped so that the sides have fallen away like the petals of a flower.

Work is extremely slow as the pot is so crumbly. At the moment they are looking at the inside of the pot so we will have to wait until the pieces are turned over before the decoration shows what type of pot it is. 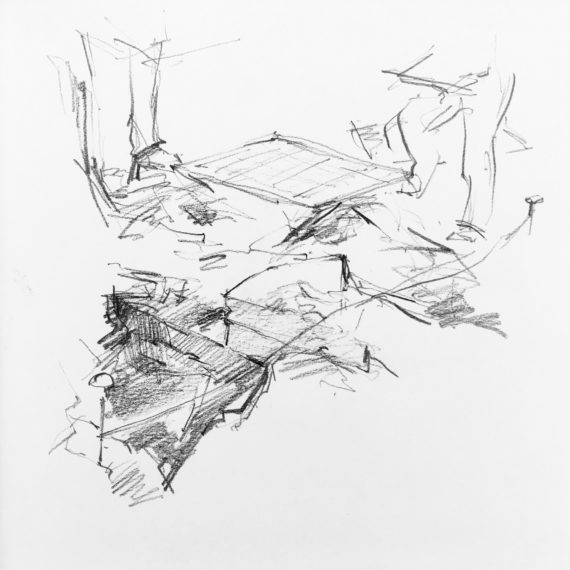 The north wall of Structure 27 has recently been found and today was beginning to be exposed properly. Meticulous planning using a grid is made of each stage. 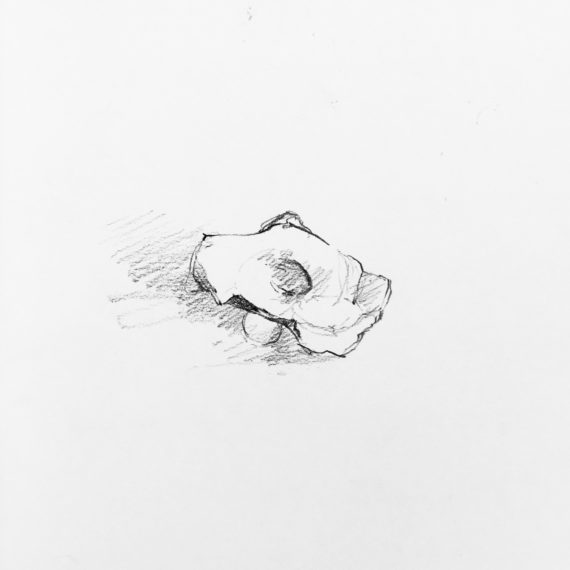 A beautiful piece of red sandstone has come into the Finds Hut from Trench T. Amongst the muddy colour of the trench it has a small circular dip in the middle showing the intensity of the dark red – almost Alizarin Crimson perhaps with a touch of Venetian Red. 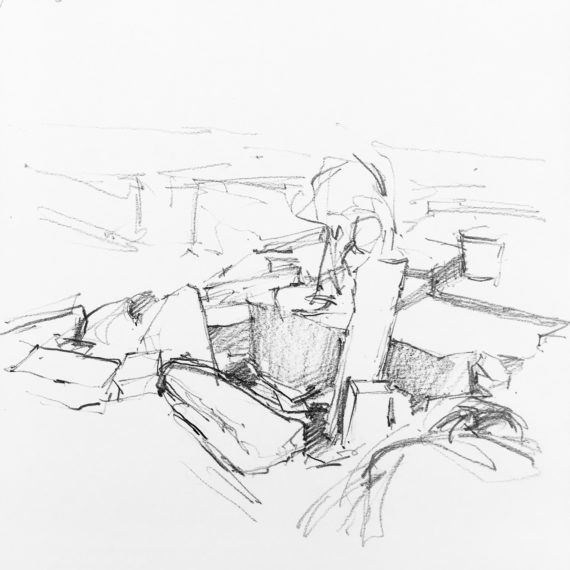 Work continues clearing midden in the passage between structures 12, 26 and 30.  Previously designated the ‘corner of loveliness’, it is still lovely but becoming more complex – like everything else on the Ness of Brodgar.

The Ness of Brodgar Project Manager, who is in charge of finds, together with the resident geologist ‘The Rock Lady’ encourage me to experiment in mark making with rocks from the site.  These are usually silt stone or sandstone. 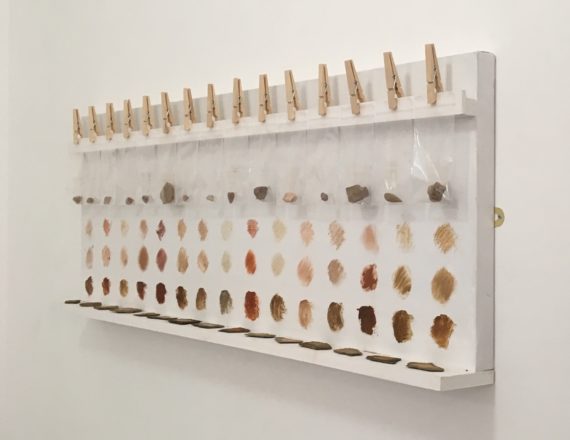 For the past two years I have made ‘spot’ paintings using a range of mediums for each rock: dry marks, mixed with water, and ground in beef fat. It is a mock scientific experiment in which I simply enjoy the amazing range of colours apparent through different amounts of iron oxide – from the palest pinks and ochres through to dark ‘Venetian’ reds.

Today, by way of a rest from contemplating my relationship with archaeology, I returned to play with pigments.  Any suitable rock is put in a bag with a sample of its dry mark on paper.  There are a lot of them, and more to do. I’ve not yet decided what the next stage will be…

Meanwhile, sketchbook drawing continues to monitor progress in my favourite trenches, and as I had the Art Hut to myself today, I was able to do a portrait of Therese – who found a beautiful axe head last year. 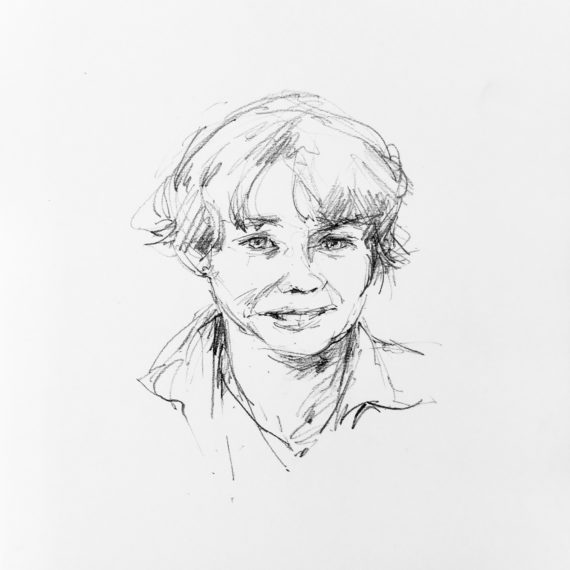 On the necessity of decisions.

Today one of the supervising archaeologists said this:

If we are not making decisions we are not solving the problem. You have to take a decision when you are digging. If it is a correct decision then it’s fine – you are doing things well. But if it was a wrong decision, the fact that you know it was a wrong decision will help you understand what was going on – so that you can solve the problem. But if you are not making a decision, you will be moving around the problem without solving it. So this is why we have to take decisions. Sometimes we are right, sometimes we are not right – that’s it.

This reminds me of Brecht’s ‘right to fail’ – relevant in so many situations.  Obviously it applies when I draw – especially fast sketching, which is a hit and miss affair when decisions have to be made on the spur of the moment. But it is also apparent in my film making, where I must take decisions to select what to use out of the chaotic mound of material, in order to create an impression of the dig – rather than get bogged down in trying to represent everything literally.

The film, by the way, is now progressing and I hope to have something to show the archaeologists before the end of this year’s dig.

Work in Trench J, around a hearth, and an update on the corner of loveliness.

Finally a watercolour of mist sitting on the hills behind Trench T. 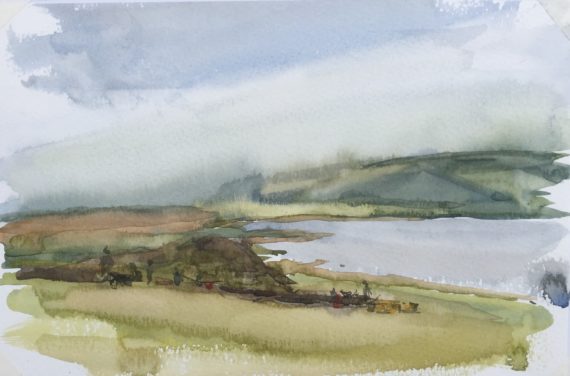 Don’t forget that all the news from the Ness of Brodgar can be seen on the Dig Diary at http://www.nessofbrodgar.co.uk

It seems everything gets bigger and more complex – including this project.  For the Ness of Brodgar this means both enlarging trenches to discover more archaeology, and amazing advances in technology.

Today I revisited a particular viewpoint at the upper end of Trench T, which has expanded every year since I first came in 2016. This season has seen the addition of two triangular extensions on either side. 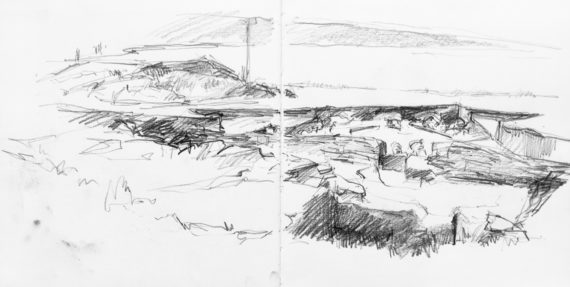 Compare this with my earlier drawing and paintings 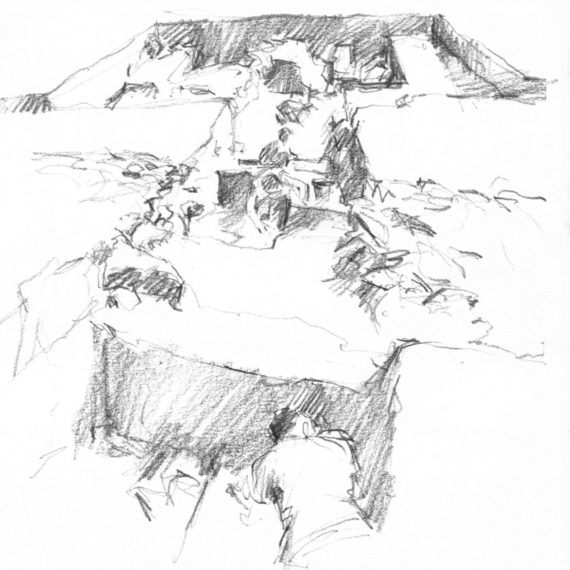 There is a new drone being used to map the trenches,  including work in combination with other technologies. 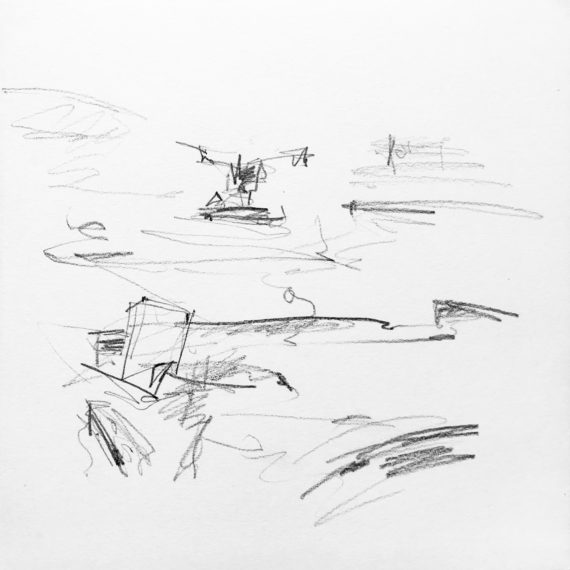 It possesses advanced capabilities way beyond my comprehension – but clearly has exciting implications for understanding the site. 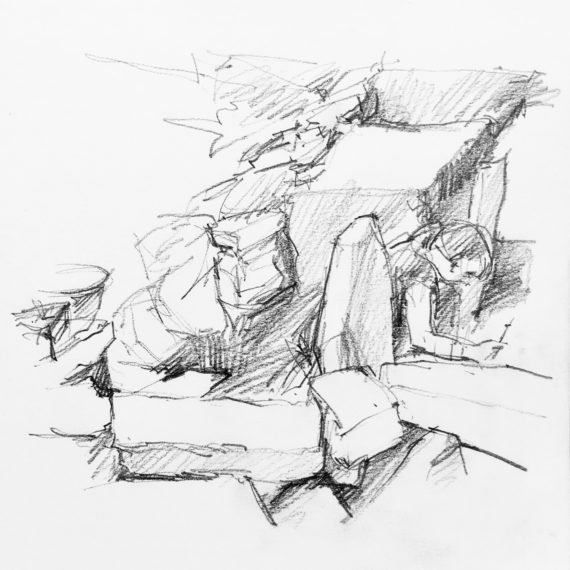 Finally to return to something smaller I drew work continuing in the space between Structures 12 and 26 – also now known as ‘the corner of loveliness’.

There was no digging yesterday due to the storms – so a chance to work at home on the film, editing sound. It’s a very slow process, sifting through recordings to find the few moments that make the best contribution to the storyline – if that’s the right word for a never ending chronicle. It is like working with found objects that never quite fit the agenda.  On the other hand repeated listening throws up small gems – like the Total Station used in Geomatics making little beeps and saying, in an alien voice, “point stored”, or the distinctive quacks of Eider Ducks on the loch. 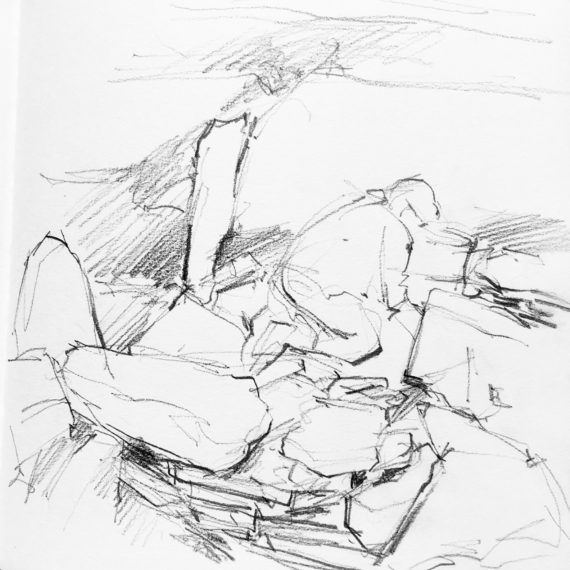 Back on site to day for more surprises and new experiences. The suspected passage between Structures 12 and 26 now looks like a small oval chamber, with the appearance of small curved walls either side. 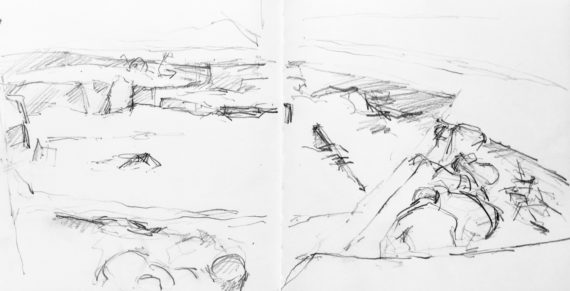 I also witnessed, for the first time, the demolition of a wall of earth between Trench T and one of it’s new extensions. A lot of vigorous movement achieving rapid change. 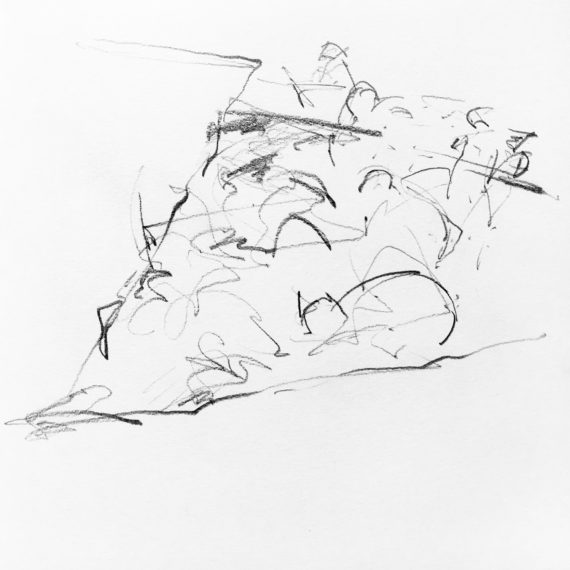 A note on the weather: while my home town in the south of England swelters in heat over 30c, here in Orkney it is a pleasant 19c with a brisk wind keeping the midges at bay…