A first oil painting on site. One of the benefits of spending a whole afternoon on one piece of work is listening to, and learning about, the ongoing the progress of the excavation – interspersed of course with discussions on music and politics. 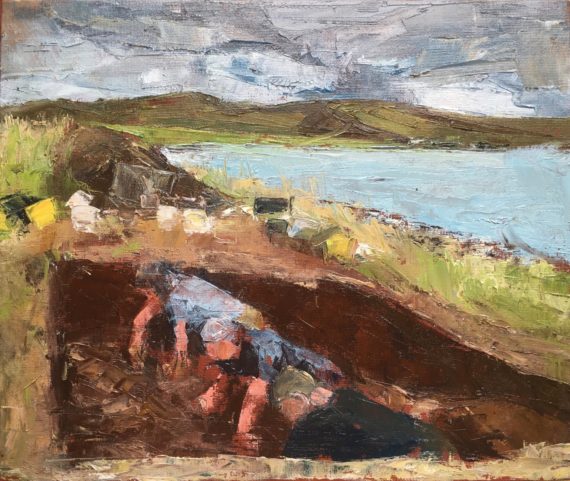 Previously in the morning, I visited Trench T 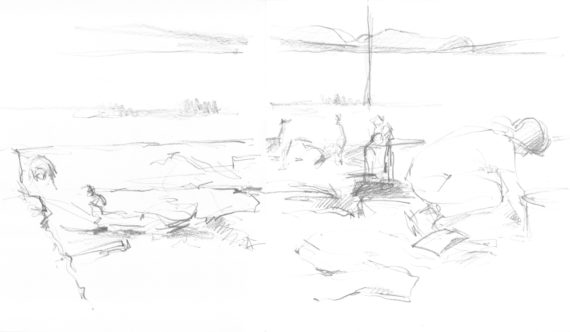 And caught the site dog in a rare moment of stillness 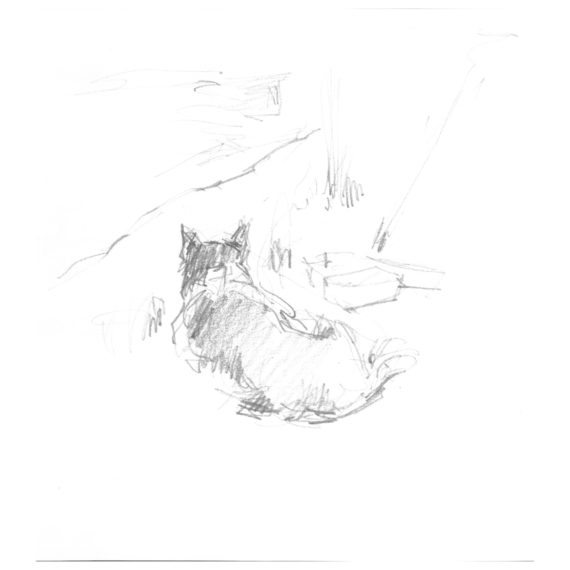 Tomorrow we have the day off, because we will be on site on Sunday for the first Open Day.

Lunchtime on the grass.  This week there are a lot more people working on site, with another group coming next week. 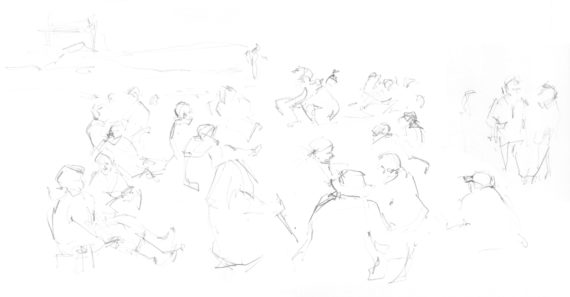 Down by the waterside, Trench Y continues to prove interesting. A change in the earth colour and texture suggests they may have found the edge of the wall. It is amazing how this team have achieved so much in just one week.

Am I having a conversation with the past – or with the archaeologists in the present – or with viewers of the future? This requires more thought…

After days of sunshine last week, the weather has become more typical of the Orkney I know. It may be cold and grey but the colours and the clouds sitting on top of the hills are a gift to paint and draw. 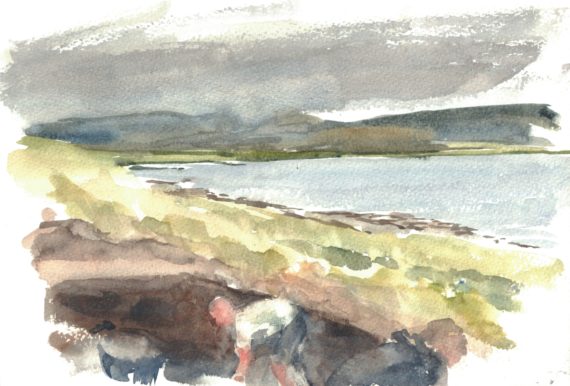 There were clouds both above and below the hills of Hoy 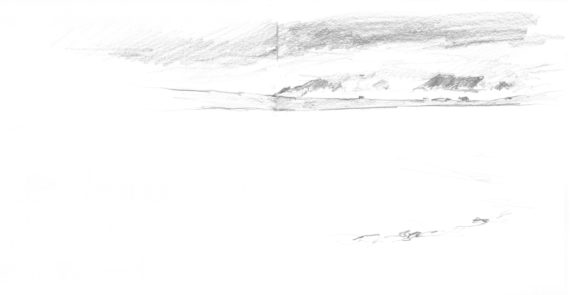 Meanwhile, work continues in Trench Y, where the wall they are uncovering is proving most interesting. Read all about it in the Dig Diary for today at www.nessofbrodgar.co.uk 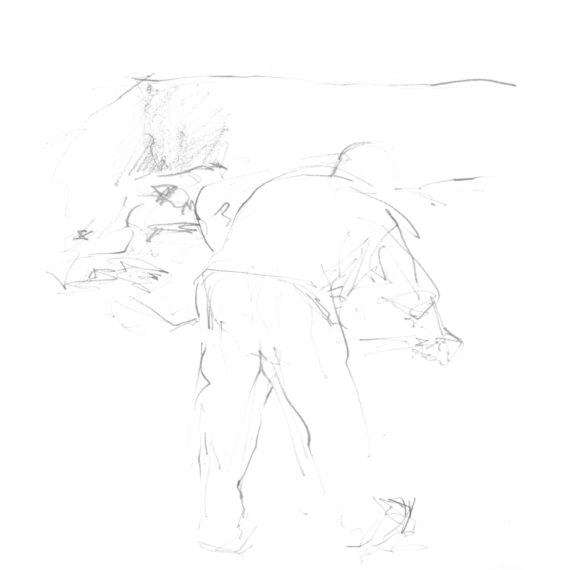 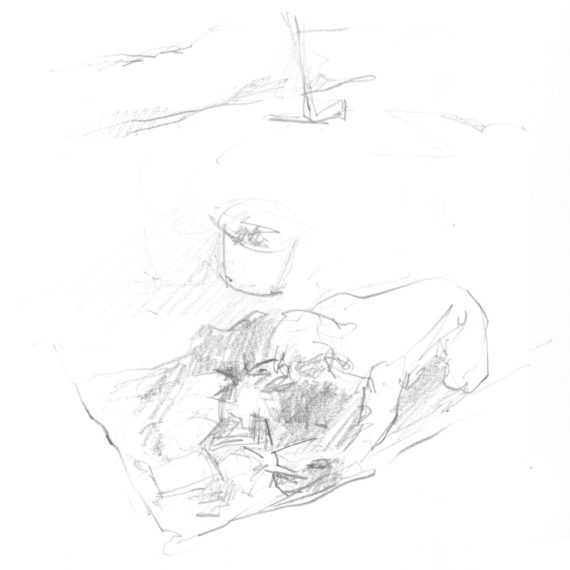 There is progress in Trench Y, down by the water’s edge, where they are looking for the outer wall of the settlement. A test pit revealed what they were hoping for so this has been enlarged. 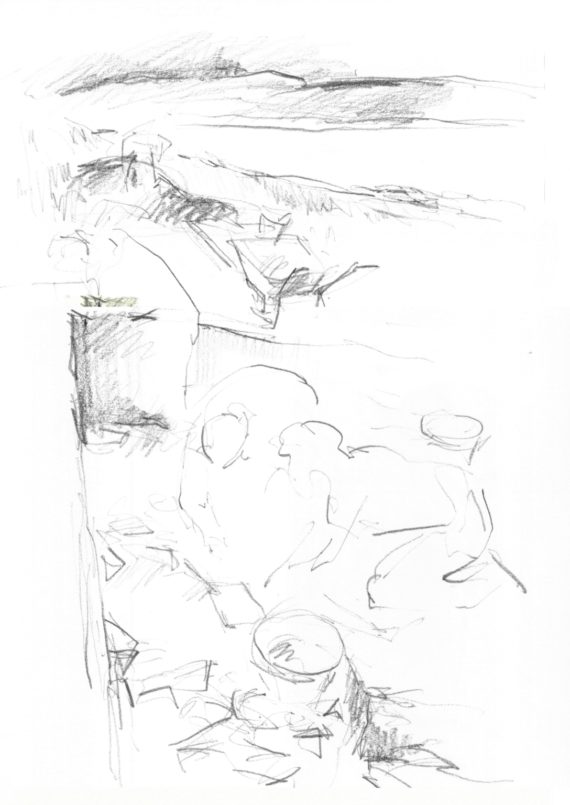 Obviously it’s early days but they are optimistic that it’s the corner of the wall.

Meanwhile further digging is going deeper towards the water, to see what happens outside the wall. Compared to other trenches, there is a lot of top soil much softer and easier to dig.  But it is still back breaking work.  They work hard and energetically, which means my drawings are even more sketchy. 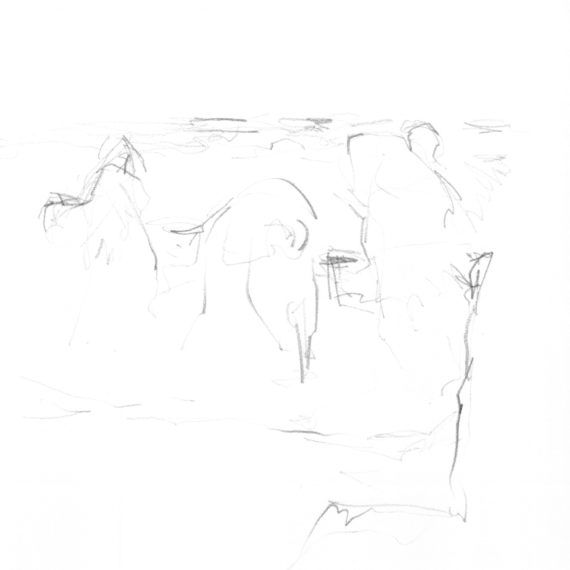 I’m learning to let a couple of lines speak, and not try to make something more finished – hoping it will work well when it is integrated into the film.

In response to a comment by a-n blogs on Twitter: Do Artists in Residence need a plan? I have decided the answer is no. The whole point of being an Artist in Residence is to interact with the host context and for that you need an open mind, just as you do when meeting people.  I have regarded every residency as a leap in the dark, which is why I resisted reading anything on archaeology before coming to the Ness of Brodgar.  Although the first encounter may be daunting, to see uncluttered by preconceptions is to see with clarity.

Each day I arrive on site not knowing what I will do. Today is my 55th day since I began the residency in 2016. The morning was cold and, being the end of the week, I was tired.  But by wandering round the site something caught my eye – as it usually does.  The previous four days have been about the mundane tasks of uncovering the trenches and cleaning them up.  Then a new trench was started and another extended, which all involves fairly brutal work with mattocks and shovels. In contrast today I focussed on two intricate and extremely delicate areas of the archaeology.

The hearths in two separate structures very different at first glance but sharing an amazing rich variety of colours in the burnt material.  Difficult to excavate and difficult to paint. 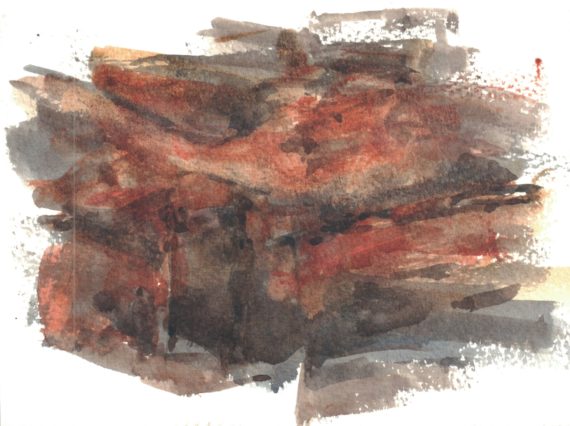 Finally I saw a large cattle jaw bone lifted out of a structure – so fragile it was expected to disintegrate when moved. But with great skill it came out in one piece. 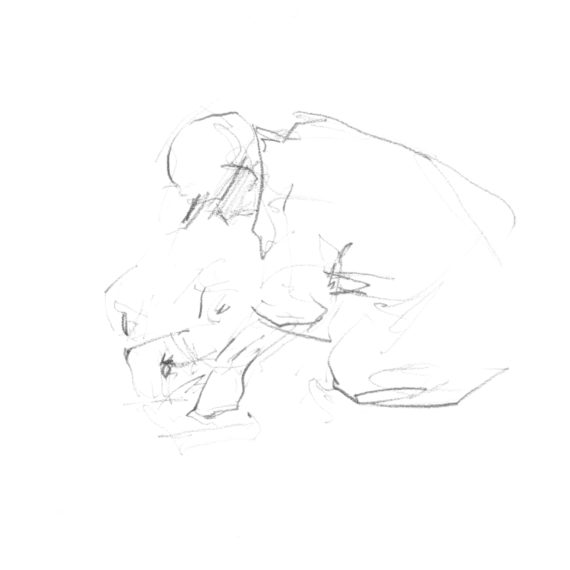 A good day without a plan…