The dig is over for another year. The last two days involved packing up the Art Hut, while dodging in and out of the rain to draw and record the trenches being covered in sandbags, tarpaulin and tyres that will protect the archaeology until next season.

At the request of Martha ‘The Rock Lady’, I made a final piece of ‘artwork’ – marks made by two rocks, red sandstone and an ochre silt stone, on three stones from the spoil heap, using a variety of mediums.

Reading from left to right: 1. dry pigment directly on to the stone, 2. applied with water, 3. mixed with duck egg white, 4. duck egg yolk, 5. whole duck egg, 6. duck fat, 7. beef dripping. Two of the stones will spend the winter in a stone built outhouse, while the third comes home with me as a control. The idea is to see how they weather over time in an environment as near as possible to one of the Neolithic buildings where colour has been discovered on the walls.  This is as close to being directly involved in the actual archaeology as I get. My main function is now recognised as a form of documentation recording the human activity on site. 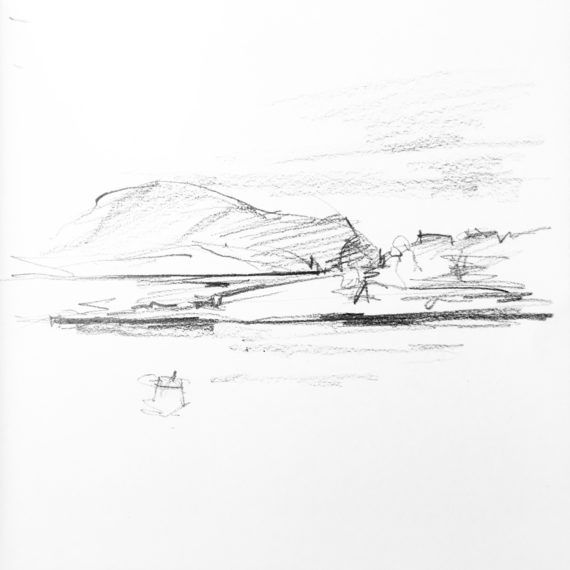 So now I am on the ferry at the start of my long journey home. Once back in my studio I shall review the storyboard of my film and begin to work towards the final edit. Alongside that will be some serious reflection supported by reading that will guide the future of this long term project.

This blog will now pause until there is further news. Meanwhile news from the Ness of Brodgar will continue in the Dig Diary. My daily Drawing Journal and other news will be posted on Facebook at Karen Wallis Artworks, Twitter @KarenArtwork and Instagram at karenwallisart, and the current edit of the film can be viewed on Vimeo. You can also support either the Ness of Brodgar through crowdfunding or my residency by buying a print from my web site at www.karenwallis.co.uk