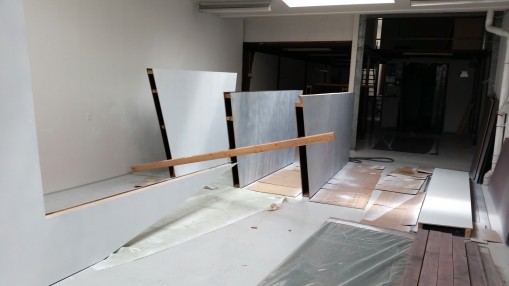 Had to suppress a feeling of rising panic today as I tried to rescue another layer of undercoat which was dribbling and threatening to ruin the finish.  Limited time is making me rush things and that’s the consequence.  Not enough time to let filler dry properly before sanding leading to an insufficiently smooth surface which causes the paint applied from the paint gun to run.  Especially when working on vertical surfaces as I am now.

I had to allow myself a five minute full on PANIC,  then reassess.  I left the damaged surface for today: it needs to  be totally dry before I attempt to salvage it, and got on with two more panels.  It struck me that years of working to a deadline on radio programmes comes in handy at moments such as these.  I remember standing at the back of the live studio having to edit magnetic tape with razor blades for an item coming up in minutes.

I measured up for the freight man today, who’s meant to be coming on Monday, but I’m going to plead for an extension until Wednesday.. 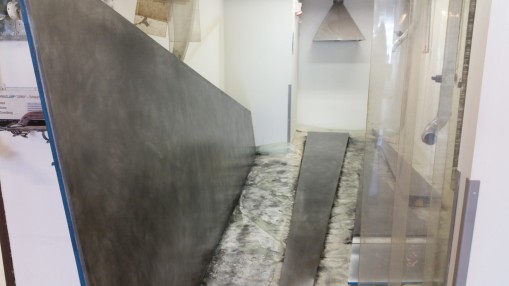 Another long day, nearly thirteen hours all in all, but I did at least achieve the main goal which was to graphite and glaze the rear of the three wing panels.

This should be a relief, and initially it was, but I noticed that the glaze was drying slightly matt and the graphite was not properly fixed.   It is the most ‘freehand’ of all the processes involved, I don’t measure in order to make up the glaze, I just put a dose of solvent, a glob of stand oil and a little white oil paint (Michael Harding zinc white).  Up until now this has worked, though it sometimes takes a long time to dry. Today I erred on the cautious side with the stand oil, not wanting it to take quite as long as my tests in the studio (which were still tacky after ten days), but perhaps I under did it as a result.  Not quite sure what to do about this, I could vary my glaze recipe adding some liquin in, I could just do it again, or I could hope for the best, bearing in mind these will barely be visible anyway.  The one that’ll really matter is going to be the rear of the main structure, and that does need to be glossy, and it will definitely not have ten days to dry, more like half that….

Tomorrow I can’t go to Roskilde, I have a hospital appointment.  It feels a bit nail biting to miss a day now, but a break is also quite welcome.  Today was quite an effort, after being up from 4.45am with Zach again.

Anyway, what I wanted to say was that I did enjoy working with the graphite again.  It’s so messy, but I feel comfortable with it. It’s like an old friend.  Why do I like it so much?  I was thinking that it’s because of the grime, the sootiness of it.   It isn’t neat and tidy, it’s uncontrolled and dirty.  Apart from the metaphorical associations with complicated (messy) emotions, it reminds me of the stories of how Sheffield, my home town, was when the steel industry was in full flow.  Covered in soot and grime.  Perhaps that’s part of the appeal.

“Sheffield is one of the dirtiest and most smoky towns I ever saw.  There are a quantity of small forges without tall chimneys.  The town is also very hilly, and the smoke ascends the streets, instead of leaving them.  It is usual for children to wash before they go to bed, but not universal, and their bodies imbibe continual dust and grime.”  From Human Documents of the Industrial Revolution in Britain by E. Royston Pike.

After a welcome day’s break I got to the studio a bit later today, it being Sunday. I was very glad to see Friday’s paintwork looking fine and began sanding at the far end of the room, only to realise I should probably mask the painted ‘wings’ before rather than after sanding. That ended up taking several hours. They’re being masked primarily to protect the paintwork on the front when I graphite and glaze the back on Monday, but also with so much red dust in the air, to protect them from that.

Once I’d finally finished masking, I then pushed on with sanding.  Tiring work, since most of the panels are vertical, but glad to say they are all now done, even the strips which will be inserted around the edges of the main structure on site.  Just two are lying flat, so their undersides still remain unsanded. A lot to do tomorrow but feel I’m in quite a good place.

The weather today began wet and miserable clearing to a beautiful clear and sunny afternoon.  I am starting to eye the weather nervously. From May 29 we’ll be installing the sculpture, with all the final preparation and touching up that will require. Also for the show itself, we need good weather! 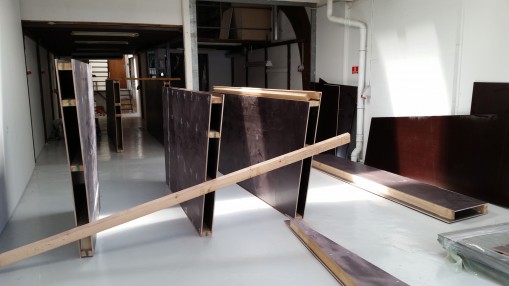 When I was a small child just starting school we used to have Friday afternoons off, until they decided to increase productivity…

Today felt like that as I skipped out of the studio at 1.30pm to go and collect Zach.  The sun was shining and I felt glad to be out in it after yesterday’s 13-hour marathon.  A rough night last night with him teething meant I would never have managed another day like that anyway, and as it was I managed to do what I hoped to do (for once) within the four and a half hours.

The day began by moving all the wing panels, front side up/exposed, into what I have dubbed the ‘butcher’s room’ for its macabre plastic hanging door.  That way, once I graphite and glaze the rear sides on Monday, they can dry as removed as possible from the sanding etc. going on outside.  Finished three layers of top coat on each panel, more or less to my satisfaction, though there are couple of minor glitches. They can wait until Aarhus though, I can’t believe they will survive the journey without touching up needed anyway, though I can’t emphasise enough how much I hope not too much.   The light in there is almost entirely artificial, so applying the coffee cream shade on top of white undercoat it was virtually impossible to rely on what my eyes were telling me in terms of coverage: with limited space to manoeuvre I became snow blind, and had to rely more on my motor sensory capacity to tell if I was moving evenly across the surface.  As I left the studio, a lovely shaft of sunlight was coming in through the skylight and everything looked wonderfully peaceful.  A day’s break now, until Sunday.

A very long day. Much as yesterday, undercoating and wondering if I’ll ever get to the glazing stage. Now it’s postponed until Monday. Not great but unavoidable.  My proxy vote in the British general election failed to materialise despite my scrambling to get the form in by the deadline. The helpline was engaged all the times I tried. So the only two Hackney people I know who are overseas voters both disenfranchised.  And found I was rejected for a grant from the Statens Kunst Fond (Danish Arts Council). You can imagine what I privately immaturely nickname them! Still it would have been a three year grant, 800 applicants only 160 grants so it would have been a very lucky sweep.  On the positive side I did sand two more large panels, only two more to tackle. Still struggling a bit to see the whole thing finished in time.