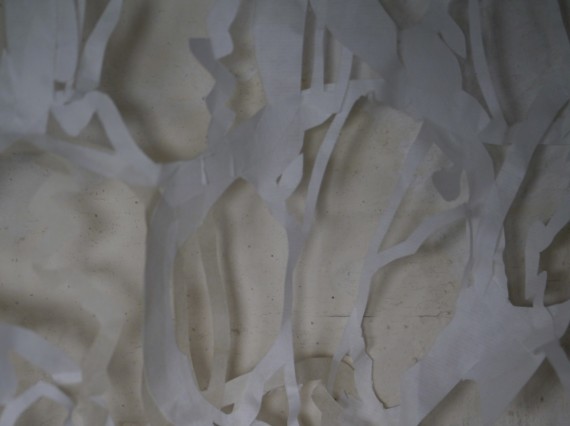 As an artist working with paper and loving its fragility, there are times when I would like to explore ways of making the work more permanent, while retaining the intrinsic qualities of paper.

I am grateful to a-n for the opportunity and to Anthony Heywood for the reference. I will be working with Meltdowns in Ramsgate, who I would also like to thank for their offer of in-kind support.

So really I shouldn’t be adding to this now as the project is finished (for now) but I just thought I’d say I’m fixing up to see sculptor Anthony Heywood who supported the project to discuss some ideas for taking it forward. He likes what he has seen so far …

So just when I thought I had finished, I was awake much of the night thinking … and it always strikes me as remarkable but strangely right that my working process often involves going back to the beginning, fishing out something I had started and discarded and seeing its value – something akin to incorporating failure.

These small cast resin blocks (max 9-10cms on the longest side) were supposed to be perfect cubes and sanded to perfect transparency. For a start I made the classic mistake when making the mould – forgetting to work to the internal dimensions – and then I didn’t put enough shellac so the blocks were difficult to get out of the MDF mould so lots of sanding later, helped by Lindsey, they ended up still needing more sanding to get them to the perfect shiny, transparent state. 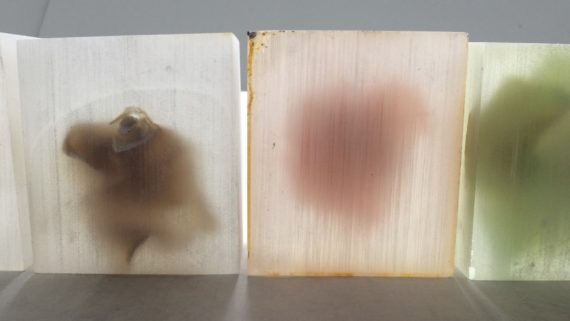 BUT I kind of liked them how they were and despite going to Screwfix and getting a sander, I have spent nearly the whole year NOT sanding them. 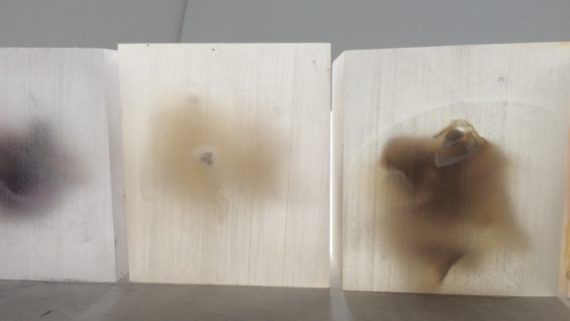 Looking again at Rachel Whiteread’s resin pieces, which I remember researching for my BA dissertation (if I remember rightly, there was a link between translucence and the feminist notion of the immanent other), I realised I just had to get back in the studio this morning and play with those  initial pieces!

So now it’s time to sum up something of what I’ve done with my bursary.

I have experimented with casting resin into blocks and worked with Meltdowns in Ramsgate to learn some of the technical stuff and done lots of research via the internet. The Health and Safety requirements of working with resin is the main factor in my decision to work with ArtResin as I take the work beyond the experimental stage, despite the expense, as this means I can work with it safely in my own studio and not have to travel to Ramsgate.

What I only did a bit of was casting: several reasons but one of the main ones being the physical effort required which with my RA makes it daunting to do large scale casts and mould making, so I like the idea of pieces/images/photos embedded straight into a container, like a tin. One solution I tried was to paint the resin onto 3D forms in several layers as practiced at one of my sessions at Meltdowns foundry in Ramsgate. I didn’t use enough hardener on that occasion and also  painted it on too thin so next time will make sure it is thicker. 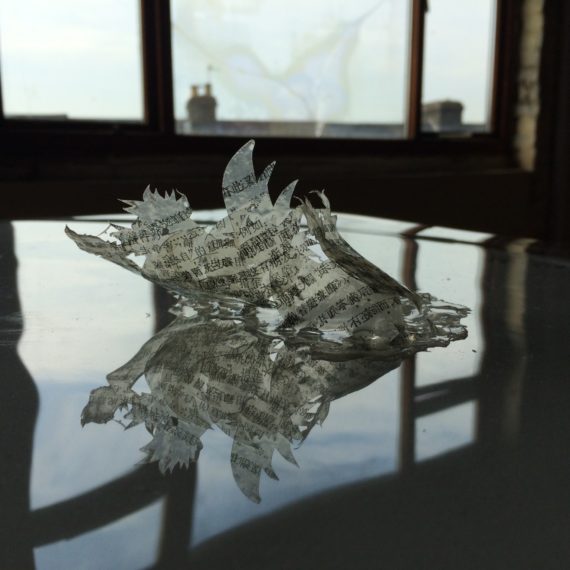 Another solution is to continue with the direction started as in the image below which is to make larger pieces out of several smaller pieces and to let the work grow incrementally. I made this piece almost by accident when getting the studio tidied up for an Open Studio event and it also resulted from a failed piece … I’m often rescuing work to make it into something else. 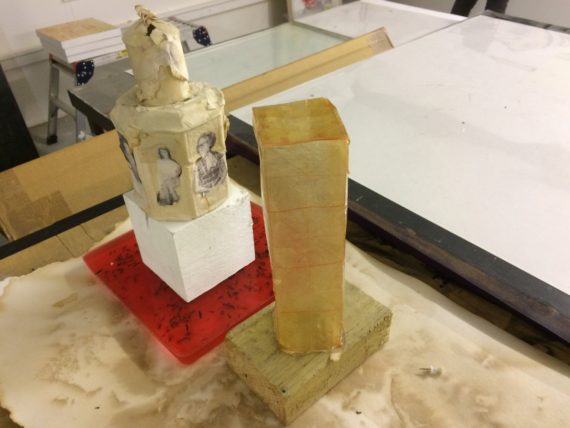 Researching resin sculpture online I came across some great pieces  such as this one by Rachel Whiteread, which is an inspiration for moving forward.

I have definitely had a bit of trouble getting used the the shininess of the resin and the way it changes the nature of the paper. Testing the effect of the resin on paper has helped me come to a new understanding about my work, I think the idea of preservation of memories is not where I am going with it. I do work with memory but find memory to be so mobile that I don’t want to fix it in my work – I tend to mix stuff up and want to keep a sense of that potential to re-mix, re-order and make new worlds. Rather the resin fits in with my interest in materials and what I can do with them and with my journeys in collage.

So I feel as if I haven’t quite done what I planned but have deepened my understanding of my practice over the past year and the more sculptural work with the resin is definitely something I will continue with.

In my application I said I’d write an application for ACE funding to produce new work but haven’t actually got round to that yet. Partly because I feel am going in a new direction in my practice that is working in tandem with the resin experiments and that is helping me achieve one of my stated aims which was to “become more focused on my own practice and achieve an even better balance between my work as director of Dover Arts Development and making and promoting my own work.”

Finally, I’d like to thank a-n for all the support I’ve received in 2016 and the opportunity, through this bursary, to do something I wouldn’t otherwise have been able to.

I realise I need to wrap this project up …. and want to do that by developing the sculptural collage idea in my previous post, though time is rather against me in the, as usual, slightly frantic run-up to Christmas, which is only partly due to the impending event itself! I always get a very time-consuming contract at this time of the year and every year swear it will be the last time I do it.

Back to the matter in hand, I have in mind a new piece of work that contrasts the semi-opaqueness of wax and the shininess of resin. Apart from the contrast in their physical qualities, they are both materials that relate to “preservation”, specifically of the body.

I am not sure where these thoughts are taking me yet, but the good thing is that this a-n bursary-funded project is ending not with a final piece of work but rather with sense of something new to explore.

My resin experiments came to a stop as I had various things to contend with such as shingles and then gastroenteritis and then excruciating knee pain. The knee pain and jamming of the joint is likely to recur from time to time until I decide it is so bad that there is no alternative to a full joint replacement. So not good but …. the open studio here in Dover at the beginning of the month with fellow studio holders and guest artists was a huge success. We had loads of visitors and lots of lovely feedback.

I realise that working with resin is very expensive and I am not sure yet how I want to work with it. I am both attracted to and put off by the shininess. For the open studio I created a mini installation, bringing different materials and forms

together, including a block of coloured resin with tea and the resin-painted column of paper which is now very brittle.