Its one of those funny weeks when things go right and things go wrong and sort of balance each other out. I had been invited to take part in a project next year which I have just discovered is not going ahead, probably because of funding and on the same day I find that a proposal for another project has been accepted. Meanwhile I am still making innumerable (or at least it feels like it!) little paper shreds on pins. 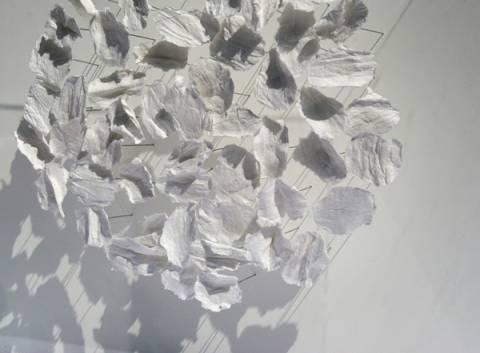 I’m getting a fair amount of work made. I am dividing my time between making hundreds of tiny hand-cast paper fragments and researching opportunities, meeting people, visiting exhibitions and helping other people with their projects. The paper fragments are set on pins and will end up accumulated together as part of a larger piece of work but are rather monotonous to make. I have also been finding more stories related to the commons. During the year I have been collecting stories, which seem to have a connection to the woods (either these specific woods or the idea of ‘woods’), from Elmbridge people. Some are factual accounts some are reminiscences and some are fairy stories. I have then been installing the stories back into the landscape. At first it was very difficult to find contributions from people but there is a growing theme now.

Radio silence doen't mean that my project has ended, rather that it has moved on to a period of concentrated work. I am aiming to complete some pieces before December although my working space at St George's has been partly taken over by people selling Christmas cards. They probably wonder what on earth I am doing and I am finding it hard to work with people constantly 'there'. However, it will all work out and one of the benefits of their presence is that the heating is on!