So day two arrives and progress made. I have started my residency sketchbook bringing may research references together and gathering material for reflecting on the ideas. Tests have been done for some of the techniques, working with screen printing last week and dry point etching this week. At the University of Suffolk there is an artist’s studio complex called Atrium Studios. Two of the artists with spaces there, who were also students on the Fine Art BA course previously, came in to the print room today. Sarah who I had already met introduced me to Julie, (again that is) after meeting her in the studios. Interesting to talk with them as they began developing their work. Last week some students came in too, early days yet, but I am meeting people and settling in.

Working through the quotes and references from a couple of years ago while on my Masters, I am picking up on the beginnings of the project ideas around simulacrum and also adding new permutations and rethinking some aspects. Theorists like Barthes opened the ideas, along with Hal Foster’s ‘Return of the Real’; that was also a big influence. At the moment I am working along the lines of ‘Without a “guaranteed referent in the world” from Barthes Image – Music – Text. But turning that right around: making work that does have a referent from the real world.

It seems to tie in with another quote, “In a world of commodities that are endlessly reproducible, the process of serial replication takes on a logic and momentum of its own, to the point where it becomes impossible to distinguish between the original and the facsimile”. Nigel Wheal discussing the simulacrum in relation to postmodernism.

Work so far reflects responses to these references in different ways, but the main body of ideas are yet to begin, Glen the technician is helping with photo-screen preparations for me for next week. This week’s work will be dry by then, looking forward to getting back there. 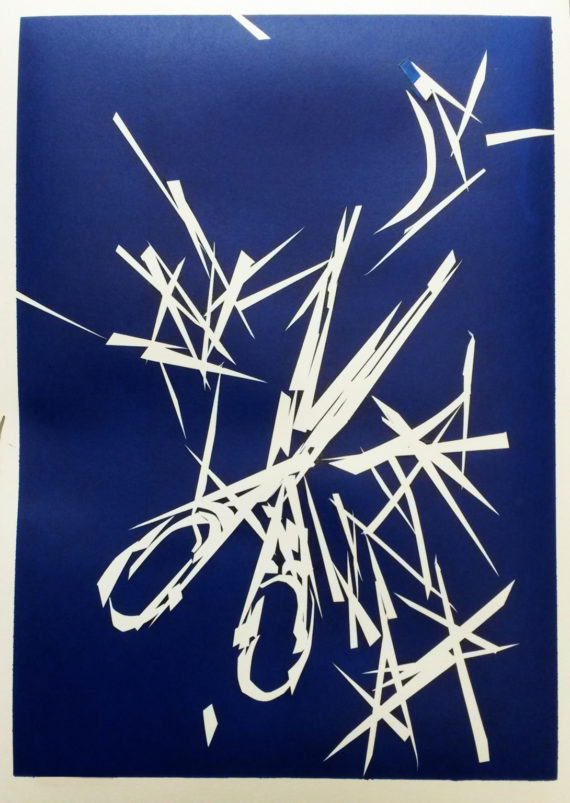 Start as I mean to go on is the phrase that comes to mind. I got two short print runs completed in the first day. I met many new staff and some students, and found my way around.

I am starting a new sketchbook for the residency, bringing together all the quotes and theories from my MA studies that began the ideas and enquiry that the residency intends to investigate and respond to. The sketchbook and this blog will discuss the theory, reflect on the ideas and work produced, and document the interactions with the students and staff.