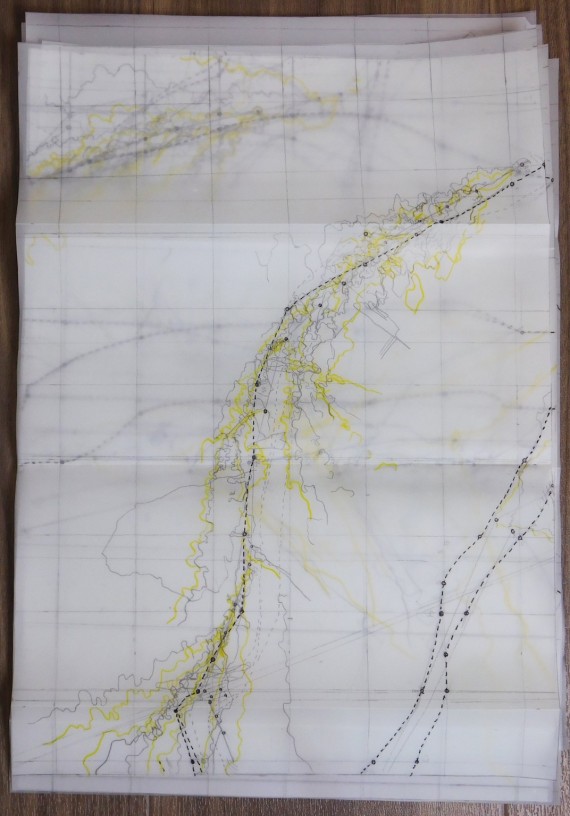 Maps, Massey writes present space as a surface that is both complete and closed, they provide ‘an order in things’(1), and allow us to find where we are and the route to somewhere else.(2) What has drawn me to Massey’s writing is an interest in her concern with how current Western maps present space as a surface and how she questions this.(3) I am particularly drawn to her thinking that instead of space being a complete, closed, surface that it could be open, and what Massey describes as an ‘ongoing product of interconnections’(4), that would ‘be always unfinished and open.'(5)

Through some recent pieces I have begun to reflect on these ideas, fragmenting a mapping made previously (titled Start SH 755 079). By fragmenting I have been able to disrupt the reading of the piece as a whole, and also open it up to different arrangements.

Some postcards made using areas documented from Start SH 755 079.

Folding further interferes with the surface.

Taking individual pieces down from the wall and noticing how interesting they are piled up.

In the construction of the work I have been using the OS map as a guide for plotting walk information, creating an order from it. Massey asks whether Western maps are another way of taming the spatial.(6) Am I trying to tame the information through my process by creating an order? I think I am, however there is also a strong desire to open the mapping up again.

Since returning home from Stiwdio Maelor I have continued with work started during my residency.

The piece above I have called ‘Start SH 755 079’ and refers to a walk made early on during my time, it is the folded up piece posted previously.

After the walk the drawing process began with developing a way to relate points walked to the OS map, scaling up the area and working out how to place footsteps, creating a system/instructions for plotting them. In yellow and green the path tracings that I made on the walk are used to mark footstep points, representing the path ahead.

Key within the drawing process are the layers that accumulated within the drawing, multiple outlines generated through attempted plotting’s and possibilities of plotting. Led by the instructions developed, the OS map, along with my experience. Thinking about how someone else might approach, or deduce something different could be interesting to explore. The work I hope reflects a landscape mapping, perhaps a path to follow, but also displays the conceptual journey in physically thinking through, pinpointing, erasing, decision making, to construct the area on the tracing paper. Development of this process and continuing to explore layers within the work is something that I hope to expand on. The possibility of multiple walks coming together within a space and how this could be negotiated is another idea I’m considering. Asking myself about the importance of the initial site within the work vs the abstraction of this information and what this produces.

An interesting book, although I’m only on the first chapter, Mapping Spaces: Networks of Knowledge in 17th Century Landscape Painting, edited together by Ulrike Gehring and Peter Weibel is providing some interesting ideas on how artists approached and brought together Dutch and Flemish landscape paintings with cartography. I’m hoping through reading to learn more of the relationship between artist and cartographer, along with strategies explored, and ideas communicated through these works.

As I reach the end of my residency the last few days have been very productive, including lots of studio time and a climb up Cadair Idris.

In previous blogs I mention man made interventions and this seems to have lost focus in current developments. The mappings I am working on looking to generate a dialogue between map space and experience of walking. The works developed seeking to place, plot, deconstruct experience and understanding of being in the landscape.

In thinking about how to plot I have started some pieces working on acrylic, attempting a more physical approach to the mappings. The transparency of the acrylic allowing me to explore layers within the work.

The process exploring the relationship between points (steps made) established on a surface referring to the OS map, against much freer line drawings made whilst walking (of the path ahead). These initially being traced, but in my last walk up Cadair Idris drawn into my sketchbook to test out a different approach. Using a pin tool to scratch, along with pens, and some waxy pencils I am beginning to develop some work on the acrylic.

Acrylic piece being developed in response to Cadair Idris walk, 61 x 61 cm, against a plaster wall.

Acrylic piece in response to Aberllefenni slate quarry walk, 61 x 61 cm, against both a white wall and detail against plaster wall.

A larger acrylic piece where I hope to bring together the walks I have done.

An earlier unfinished mapping which I showed in my previous post is also beginning to feel quite important, in folding it becomes something to un fold, suggesting an interactive element to the work. The idea that the works could suggest something to follow, but is impossible is an exciting direction I would like to consider.

Pictures from walk up Cadair Idris on 28/8, stone walls traveling over the undulating hills below, and the lake Llyn Cau at the top.

I’m very sad as this will be my last blog post from Stiwdio Maelor, it has been an extremely valuable intensive and exciting period of work in a stunning landscape, with the friendliest and most welcoming people.

Once home I plan to continue to develop and finish the works made here and share the results. I would also like to spend some time reflecting on the work and processes being explored here in relation to previous works made in response to urban space, there are definitely key cross over points. The residency has also opened up some new areas of research which I will enjoy looking into.

Over the last few days I have continued to work with what I have gathered on walks. Thinking about my place within the landscape being walked, it being dramatic in its scale and impression on me, mountainous, and very isolated at points. The other day I found myself walking down a path surrounded to head height by a tall green bush, the path narrow and my pace becoming faster as I went through. Considering how to plot my place within this territory.

Whilst continuing to collect pedometer notes I have also continued to trace interesting interventions within the landscape that suggest a structure, or structuring of land by man. The relationship of straight line to surrounding land still feeling very important. On 25/8 on a walk through the Aberllefenni slate quarry I began to question the role of these in the work, whether they are a part of the plotting works I have been attempting, or another element to be explored, also whether they need to be traced or not. However, the tracings of paths have been very interesting to investigate within plotting pieces, but whether these need to be traced directly from the landscape, or can be drawn, I am unclear at present.

Here are a few examples of plotting pieces being developed, working on tracing paper, and an acrylic sheet, scratching into the plastic.

The Aberllefenni quarry walk being an extremely interesting walk, landslide amounts of slate on the hillsides, alongside the remains of structures from the quarry still attempting to hold form amongst the slate spill around them.

The plotting process has involved developing a strategy for how to plot points, referring to the OS maps layout in order to strategize how the footsteps are mapped. Also looking at the graphic layout of the map and how this can be thought about within the work. I was given a wonderful opportunity to have a look at an OS map from 1901, the graphics and look of the map very different from todays. It showing a definite change in the landscape due to the increase in Coniferous trees planted.

Being well into the second week of my residency I am increasingly thinking about the relationship of this experience to the focus of urban space within recent work, both very different landscapes.

An interesting quote by Denis Cosgrove that I found whilst reading Julie Mehretu City Sitings ‘Cartography acts not merely to record the various ways that the city is materially present, but as a creative intervention in urban space, shaping both the physical city and the urban life experienced and preformed here’, Denis Cosgrove, ‘Carto-City: Mapping and Urban Space’, in Mapping a City, eds. Nina Montmann and Yilmaz Dziewior (Hamburg, 2004), 49.

This is increasingly making me think about the creative intervention I hope to have within the works I have been making here but also previously, and how this can manifest itself.

In the last couple of days I have started to think about how I can work with what I have collected from the walks I have done.

The onsite tracings made of man made interventions are from a particular viewpoint. How they hold and define surrounding space I feel relates to the points plotted, both can define and structure a space.

Scale of mapped area onto paper in relation to onsite tracings is important to further think about as well, whether traced imagery ought to stay in the scale taken in, or increased/decreased. Thinking also about the best way to work with it.

On the 20/8 I began to trace paths being walked, this I thought might bring actual walking perspective to the work. Layered together the acetates of these create their own landscape/map, whilst translated onto the mapped area, become a series of sections.

At present working with the above I am interested in plotting, and in how man made interventions found hold and define the space around them.

Here are some images of things I am working on.