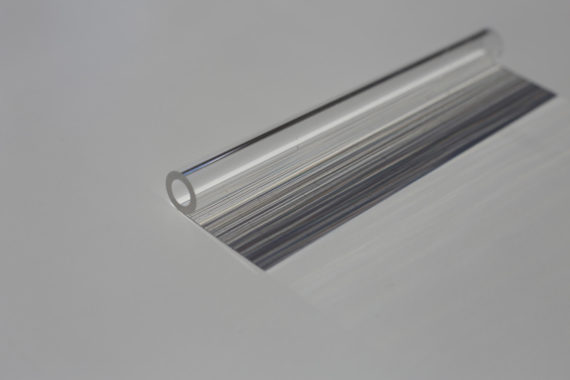 I observe light and structure, and the relationship between the two. In sculpture, photography and installation I explore the way the sun and artificial light transform an object in a visual way, exposing structural details of everyday objects and materials. Working with natural light brings in the idea of chance and patience while informing a slow-down in pace; I long wanted to document the change light causes to my chosen objects in film to enable me to tell the story even when light isn’t present, and without the use of words. 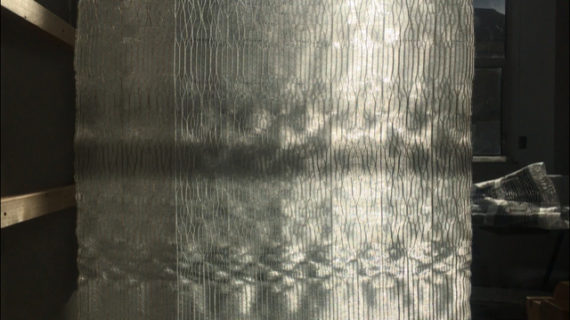 Alongside photography and video I work with weave.

My sculptural work ‘X-Ray’ series (2009-ongoing), which tests how far I can push weave against its own conventions, exposes its vertical warp, which is usually hidden. I have developed my own weave technique to reveal and manipulate the warp structure, and the result is a unique translucent material.

Having developed my weavings from their original state into sculptures, I install them to interact with light. In my installations I investigate materiality and time, for example the way a weaving is visually transformed and mistaken for glass or ice. This happens through a performance with sunlight: as light enters space at a specific time of the day it gradually illuminates and transforms the woven medium, brings on a momentarily spectacle, before abandoning it until the following day.

To capture these visual aspects of my sculptural work I document it in photography, and now film. Before the a-n Bursary, I always had to explain how this gradual change happens using photos and words. Now, having used the funding to undertake a course in editing I can refine my footage and play a film in the future, showing the visual effects of the work without words. This new skill also enables me to make films for other projects and concepts; as you’ve perhaps already seen it those of structures found on train journeys or objects.

The stills here are of a video in progress, showing the illumination and change brought on by the fading in and out sunlight; it can be viewed on my Instagram @rita_parniczky Please view and follow for more. 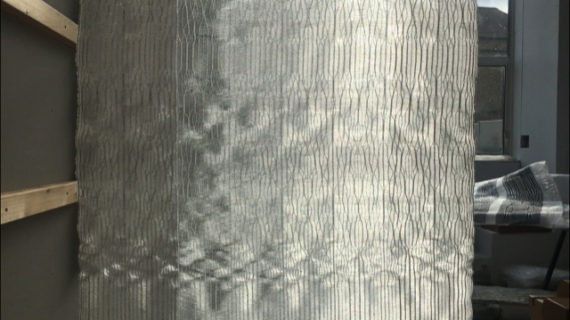 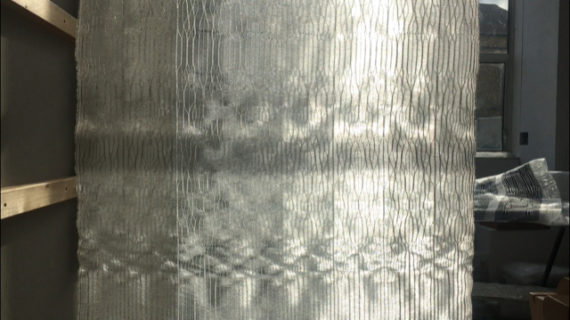 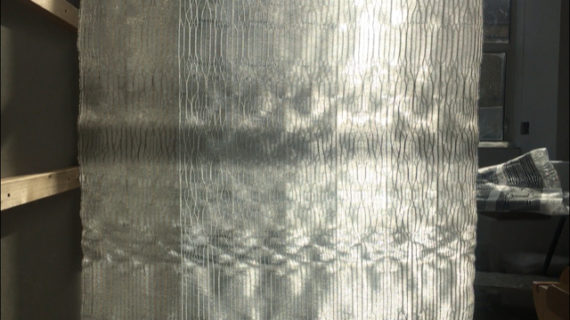 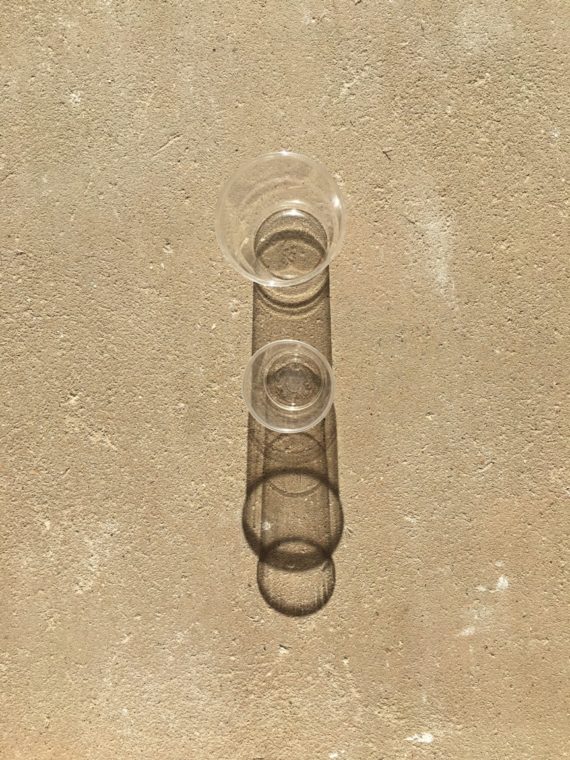 The project also included mentoring with an arts professional whom I had in-depth discussions about my practice, projects, perspective, representation and goals. We refined the language I use to express my concepts and narrative; together we worked on my artist statement and viewed my on-line presence too. Aspects I found most helpful, if one has to pick one is receiving a so-called reading list with works by philosophers and thinkers, artists and scientists focusing on related subject matters. It’s been a tremendous help for me to work with an experienced mentor giving me confidence and reassurance about aspects I had less knowledge in. This experience has already showed its further advantages when making new work in the studio, writing or talking about my work, approaching my industry or other artists (including the how and when) responding to and creating my own opportunities too.

A few works in photography from the continuation of the body of work ‘Mundane’ started in 2017. These images are the result of further investigation of the structure of single-use objects. To view videos and further work in photography please find me on Instagram @rita_parniczky 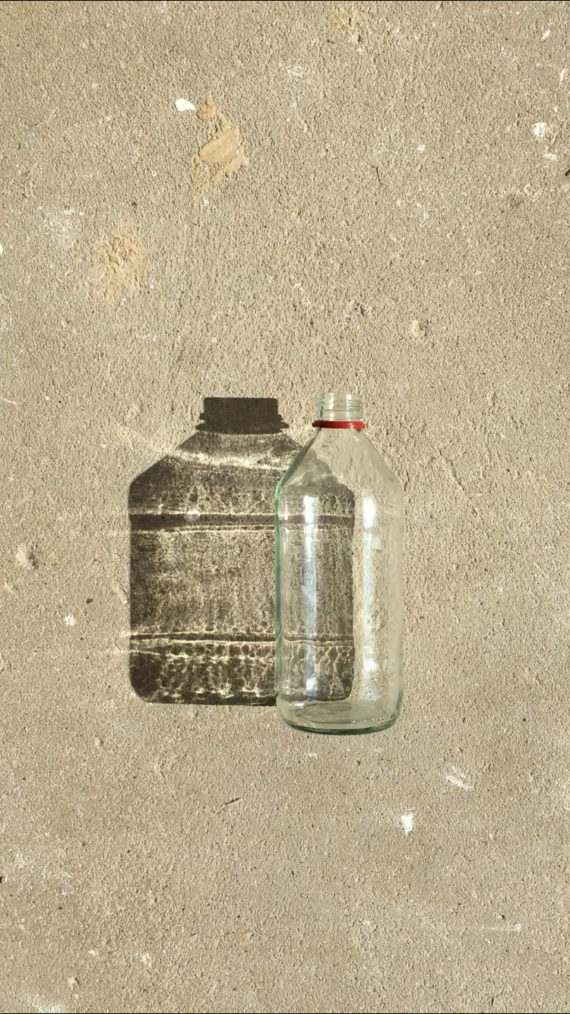 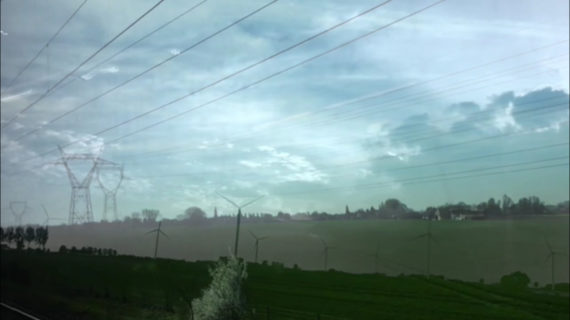 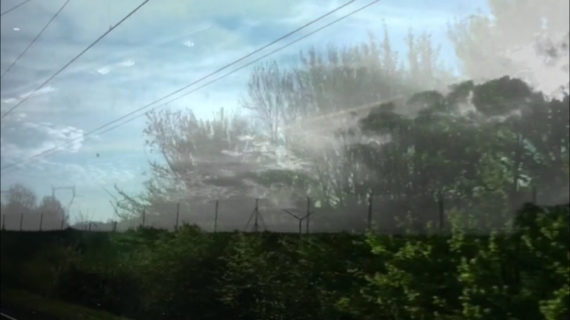 I record my train journeys in moving image. I am fascinated by manmade objects in the fields that we are so familiar with we fail to notice them. The are mundane objects: pylons, renewable energy towers, gas holders, railway tracks, electricity poles, etc. Although if we were able to bring someone over from the very far past they would not be able to tell what these are for; it would be interesting to see how they would understand them.

One of the films I worked on during my editing course was two items I shot at different times and locations. I was curious to see how they read and come together in layers adding to the narrative. Using different editing ideas and effects I simultaneously show both footages at the same time in the same frame, and as such I pull them opposite directions; pylons and renewable energy poles meeting and separating in a slow manner.

I then further edited my film bringing it to black and white, as to focus the eye on structure, and making it wide screen.

To see the moving image please visit my Instagram @rita_parniczky and scroll down to summer time. 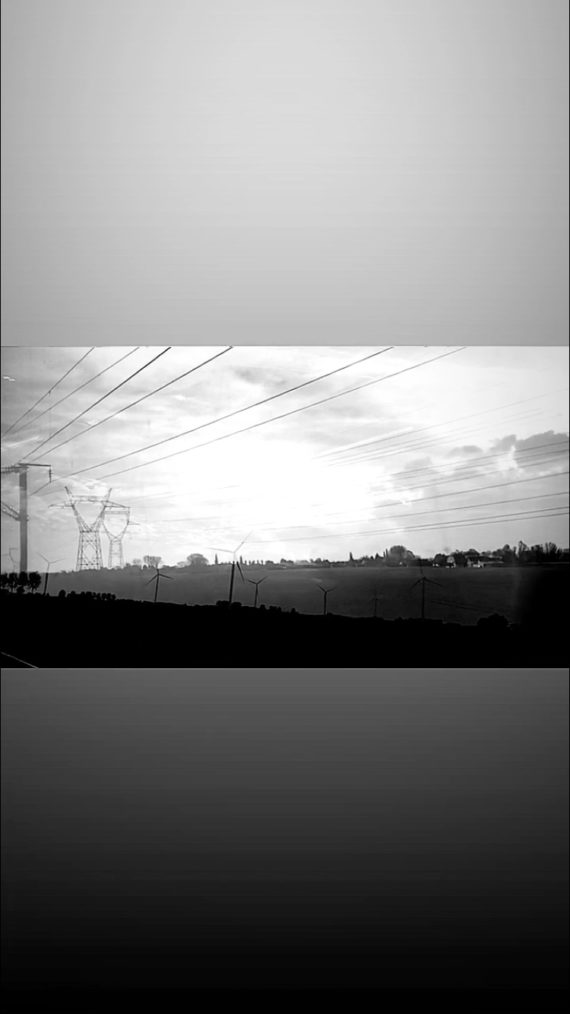 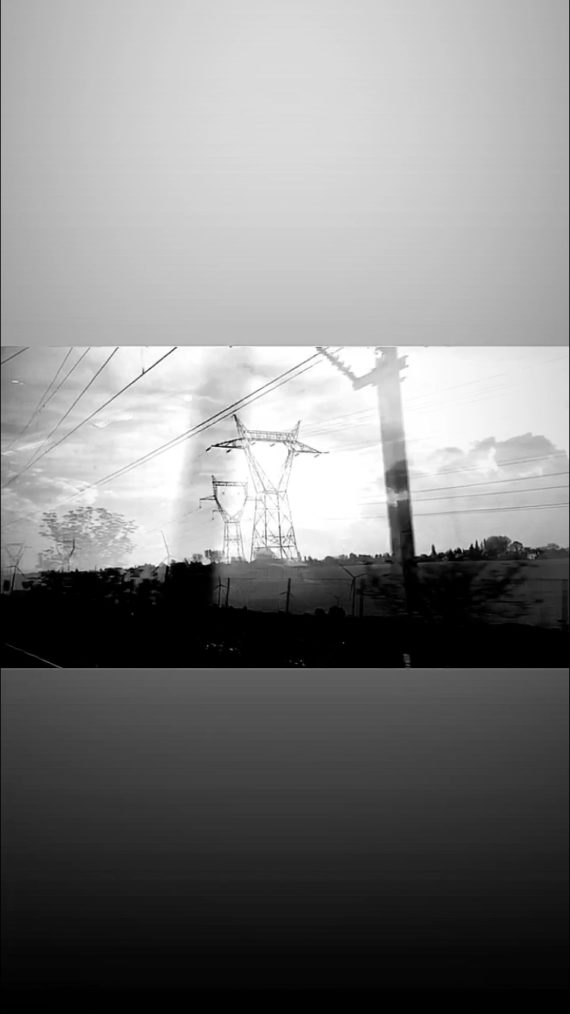 Back in the summer, I posted one of my short videos of the movement series on my Instagram (@rita_parniczky). I showed it in black and white to explore the idea of the world being colourless, and only us humans seeing it in the specific colours we do. At colour studies at Central Saint Martins, we experimented with colour, we observed how colours affect each other, and what kind of emotional effects they have on us only to be told there’s no colour in the world and different species see the same colour either a different tone or hue altogether, or see no colour at all. This I found mind blowing; something that we expect and know to be what it is (to us) is suddenly taken apart to be observed again.

“Light receptors within the eye transmit messages to the brain, which produces the familiar sensations of color. Newton observed that color is not inherent in objects. Rather, the surface of an object reflects some colors and absorbs all the others. We perceive only the reflected colors.”

At the time of the post, what I really wanted to do was to show the footage moving from colour to black and white, gradually changing back and forth between the two different worlds, one as we know it and the other as it is possibly. I could however only have full B&W or colour only. Not too long afterwards, on the editing course it was one of the first ideas I put in action; here, I am sharing some stills of this short video, while you can watch to transformation on my Instagram (scroll down and look for this first opening frame of the film shown here below). 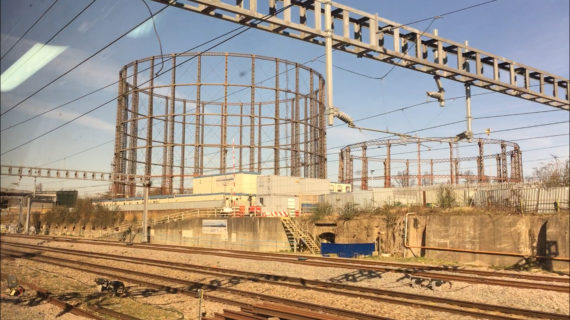 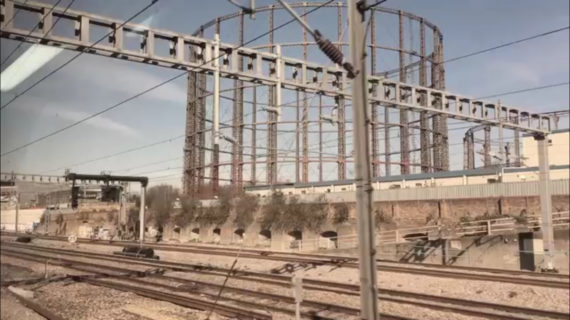 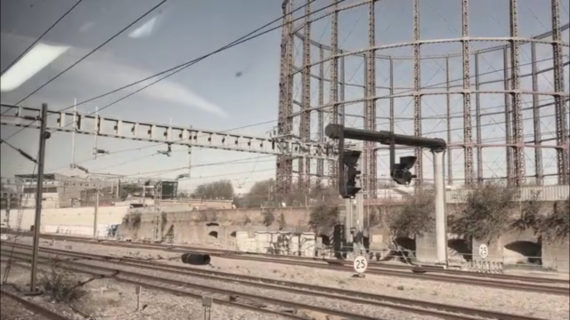 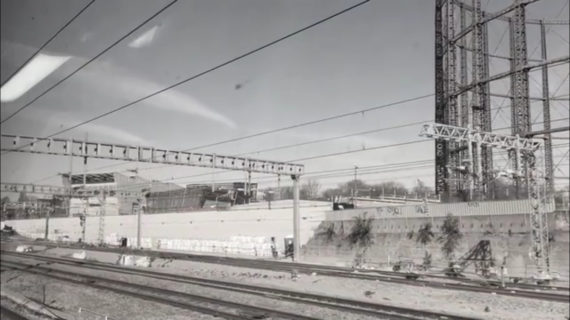 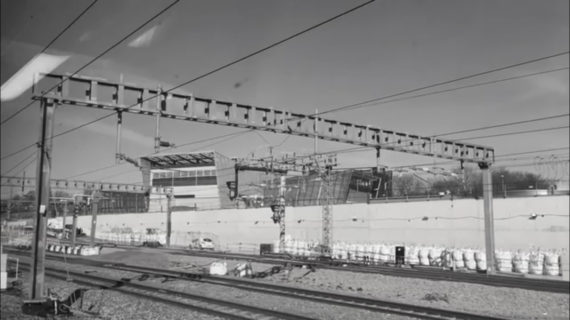 My project included a short course in editing which I undertook at UAL. I’ve been recording videos, mainly on my iPhone for a few years, and I felt it was time to learn a new skill to evolve my work through experimenting with different effects. The tutor, a professional working in documentaries led an excellent introduction to Final Cut Pro and taught us different ways of making and tricks to use. The footage I collected prior to the course are a mix of objects revealing their intriguing, otherwise invisible structures and other structural elements I filmed while taking trains across the country this year.

I’m sharing a few frames of the raw version of my video before editing; you can see moving image scattered on my Instagram @rita_parniczky 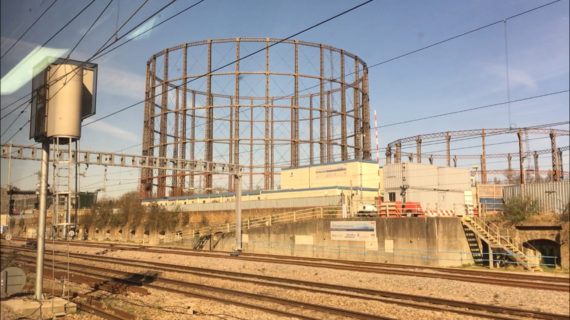 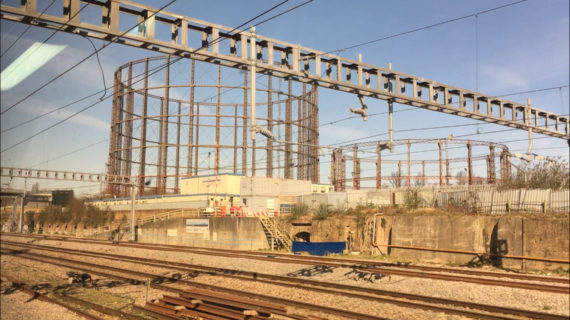 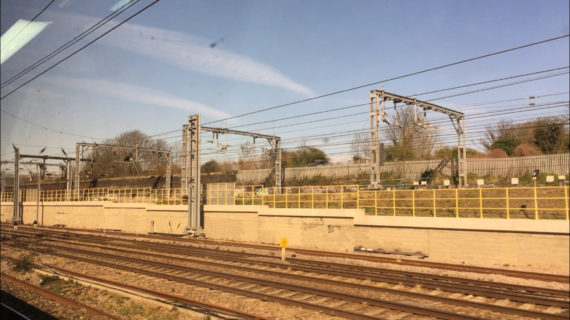 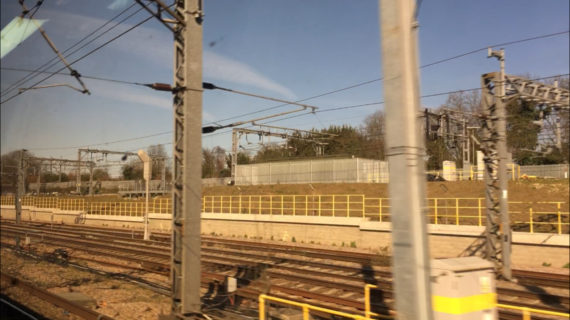 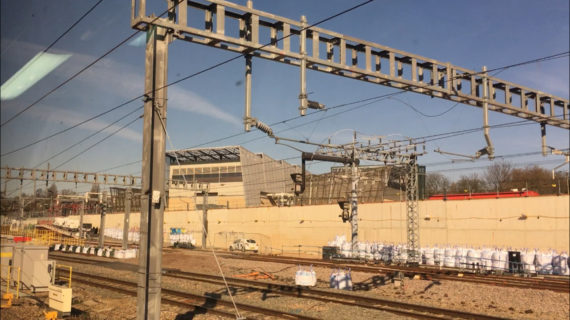 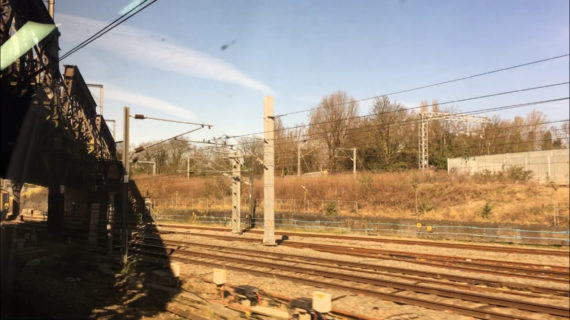 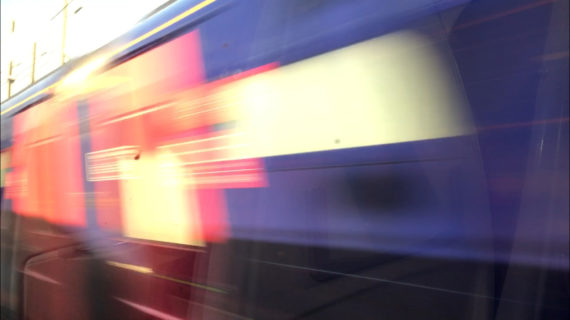