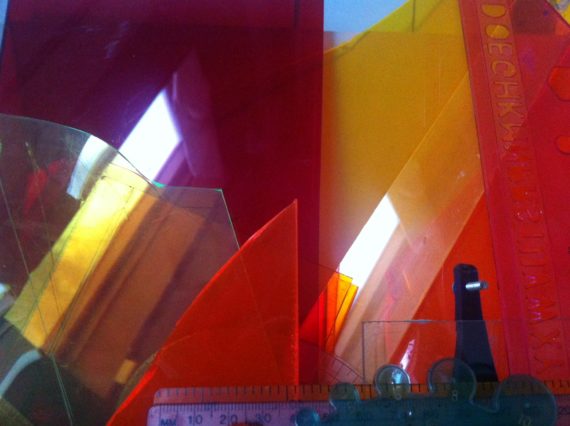 Well actually the new broom was a borrowed one but in terms of the saying today was about taking control of my studio and making some changes. Thursday brings a studio visit and I have literally been sweeping up, there are always masses of dead spiders who fall from the ceiling onto the workbench together with the carcasses of their prey. I digress.

The studio clear up and clear out can sometimes be classed as a procrastinating activity, but I believe there is more to it. Out of the process of clearing and sorting comes clarity, both in the physical space but also conceptually about the work, its intention and direction. When I spend an hour or so sorting, sweeping and tidying inevitably an old piece of work comes to light which seems to beg a question why didn’t I do something with this? The studio operates as both live space and archive simultaneously, I’d be very intrigued to see a studio which only contains current work (where would all the ‘stuff’ be?) I have many images in mind when I think of how the artists studio’s are curated photographically and seek to capture the artist and a single point if interest, a current work most likely. Artists do spend time in their working day focused on a single artwork (I wonder about painters here for example) however as a multidisciplinary artist, I use combinations of processes, materials and tools and as such this kind of image would be very limited in its ability to tell the story of my practice. I’m on the go, walking between different areas in the studio, this doesn’t take long, it’s a small space, but in every area there is stuff, past works, current works, scraps of paper with ideas for future works, long forgotten to-do lists which haven’t been done, lists with ticks where things have been.

The temptation on clear and clean days like these is to bin ruthlessly, but what of the archive aspect of the studio? The DACS Foundation is leading Art360 where UK artists or artists estates are being given support to create digital archives. What will be found in the depths of these studio recesses I wonder. When does an artwork or a document turn from being live to being archive material. It will be interesting to see how this project pans out and what role the studio plays.