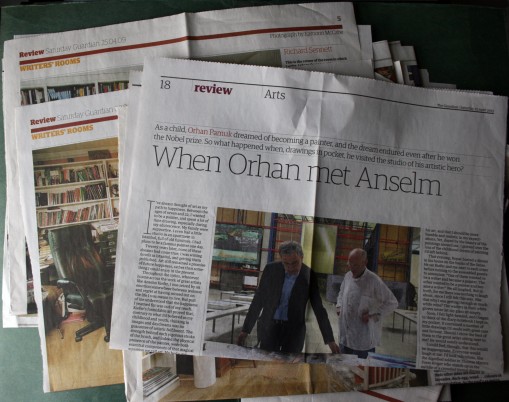 Catching up my newspaper backlog one article in particular caught my attention.When Orhan met Anselm. It’s a piece about Orhan Pamuk’s encounter with Anselm Kiefer in his studio in France. Pamuk is a Nobel prize winning author who for many years wanted to be a painter and pursued his ambition before settling to writing in his early 20’s. The possible resurrection of these painting activities long thought about but not acted upon accompanied Pumuk on his visit to the studio of a much admired artist.

Pamuk’s description repeatedly talked of the scale of the studio; enormous, immense. It’s not surprising given Kiefer’s studio extends over several buildings and multiple acres. Occupying the site of a former silk factory the work, his workspaces, the architecture, the meaning and materials all intermingle and offer such a spectacle that I deny anyone to feel nonchalant about it, even if they are as I am, viewing it through an video made to accompany Kiefer’s Royal Academy exhibition last year. Even a modest artist studio may have a sense of a generous scale given the space writers are often confined or confine themselves to. A number of years back the Guardian Review ran a series of picture stories about the workspaces of writers. Of all the cuttings I have all but one had a space contained within their domestic setting; a room in the basement, at the top of the house, overlooking the garden. The photographs of these rooms taken by Eamonn McCabe show us behind the scenes of some of the most successful and well known writers of our time. Interestingly quite a number of the writers decide to describe what cannot be seen in the photograph which is perhaps a professional default; the writer presenting us with a text leaving room for the construction of an image using our imagination, linking to our reference points of experience. The photographer shows us what is there and we welcome the opportunity to see. The fascination with exposing the scene of the crime so to speak, the place the writing takes place, the place of art production is nothing new and has for artists over generations been a subject matter in its own right.

Pamuk’s visit is emotional and connects him to an aspect of his past and his wonderings about a possible future which include painting. He looks at Kiefer’s works and revels in their enormity, later after a dinner party he decides that the small book of drawings he has been carrying in his pocket should stay there, unshared and signifying the ending of the possibility of his becoming a painter once again. The movement towards this defining moment was reinforced by seeing the place where alchemy occurs.