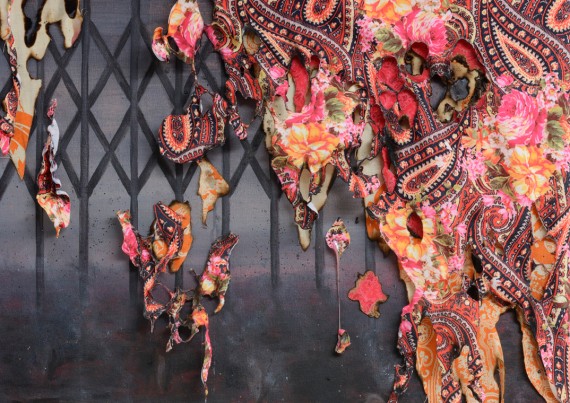 A few days ago the Tangled Yarns exhibition brought me another “first” – the shooting of my first TV interview. I was being interviewed by journalist and filmmaker Lea Borromeo for The World today with Tariq Ali. Lea and I share an interest in the dark side of the textile industry – she  is currently working on The Cotton Film: Dirty White Gold, a documentary  on Indian cotton farmer suicides and fashion, connecting the clothing supply chain from seed to shop.    On the face of it, our artistic media and  approaches how to engage with audiences couldn’t be more different but, as we discovered during our conversation, we actually have a lot  in common. I really enjoyed exchanging thoughts with Lea about about the textile industry (in particular cotton, given her current project)  and about making art as a critical, engaged citizen. Only afterwards I realised that I had somehow managed to forget to say the things I found most important! Never mind the countless verbal and physical tics I undoubtedly displayed….Goes to show that conducting media interviews, even if they are not live, is a skill – and I am at the bottom of a steep learning curve. So I am awaiting the publication of the interview with some trepidation.

Cotton farming features in two of the stories told in Tangled Yarns: Childs’ Play, which is inspired by the endemic use of forced and child labour in contemporary Uzbek cotton farming,  and Stained, where the wearer of an 1840s cotton dress is confronted by the exploited workers involved in producing the dress  at various stages of the supply chain – including a US cotton plantation slave (see also post of 28 July 14). What links these two stories is the use of forced labour in cotton farming.

ILO convention 29 (1930) on the prohibition of forced labour defines forced labour as “all work or service which is exacted from any person under the menace of any penalty and for which the said person has not offered himself voluntarily”. This clearly covers ‘traditional-style’ slavery but it also covers many variants of ‘modern-day’ slavery where the employer does not own the worker but the worker has no choice but to work,  and can’t leave…because, e.g.  they had their passports taken, because they can never repay the debt owed to their traffickers or their slum landlord/employer, because of the constant threat of violence, or simply because they don’t get paid their due wages for months on end. You could say that modern-day forms of  forced labour are capitalism’s logical ‘improvement’ on slavery: cheaper for employers because they don’t have to house and feed their forced labourers  all the time. The 2014 Protocol to the Forced labour Convention recognises these new forms of forced labour and aims to better protect those particularly vulnerable to exploitation, such as trafficked people and migrants.

Industries prone to forced labour today are those with a large amount of arduous, manual, low-skilled  labour – such as domestic work, construction, and agricultural labour. This is not a ‘developing country issue’, it happens equally in rich western countries like the UK. Where agriculture is highly mechanised there is little scope for forced labour. The problem with cotton is that whilst machine-harvesting is possible, manual harvesting produces better quality cotton and therefore attracts a market premium.

Uzbekistan, the world’s 4th largest exporter of cotton, is a unique case because the entire sector is completely state-controlled  – the state not only owns and controls all agricultural land and what is grown there, but also controls the market as the only buyer of cotton from farmers. The whole system relies on coercion: farmers cannot choose what to grow, when and how, and after the country’s independence the forced mass mobilisation of  labour became endemic, particularly at harvesting time. Forcibly recruited field workers typically  face impossible harvesting quotas for little or nominal pay, while refusal to take part is heavily sanctioned e.g. you could lose your (normal) job. Until very recently, the use  of school children, including very young ones, was widespread. However, thanks to  10 years of sustained international pressure  markedly fewer children appear to have been in the fields in the last couple of years, with very few under 18 spotted in the 2014 harvest. This reduction in child labour was, however, apparently ‘made up’ with more forced labour by adults.  Cotton farmers will see little or nothing  of Uzbekistan’s significant export earnings from cotton because (state-controlled) farm gate prices are kept artificially low.  For those who want to find out more about Uzbek cotton I can recommend Cotton Campaign  who have an excellent information hub on their website. They’ve also been really supportive during my research (thanks Matt!)

So – the cotton economy appears rotten in Uzbekistan (and we haven’t even talked about thirsty cotton shrinking the Aral Sea, toxic residue from pesticide use  and other environmental damage). It is also remarkably inefficient, as two recent reports by the Open Society Foundations and Bonn University once again demonstrate. Interestingly the cotton slave economy of the American antebellum South was also inefficient: it stifled innovation and investment in better farm implement and machinery, and the productivity of slaves was further undermined by overwork, maltreatment and malnourishment.

One thing that is different today is the role of public awareness campaigns and is impact on the big clothing brands that use cotton in their retail products. The international campaigns against Uzbek cotton called (amongst other things) for a total boycott of Uzbek cotton and specifically targeted Western brands believed  to be using cotton from Uzbekistan. This was a new departure in the scrutiny of  fashion supply chains: going beyond   previous anti-sweatshop campaigns, it focused  on the very start of the supply chain. It resulted in the commitment of over 160 brands to not knowingly source Uzbek cotton.  One would have thought that during the 1860s Lancashire cotton famine (caused by the blockade of American cotton during the Civil War), “slave-free” cotton sourced from other parts of the world might  have been a big seller in England. Alas, this does not appear to have been the case: Apparently one merchant had ‘announced in his bill heads that he was prepared to supply cloths made of free-labour cotton’ but did not receive a single inquiry in 10 years. (As quoted in Norman Longmate, The Hungry Mills, page 246/47).

The big question today is how to make cotton production environmentally and socially  sustainable. The report by the Open Society suggests that by removing state control and moving to a pluralist, open market system things could be much improved in Uzbekistan. Whilst this is undoubedly true I would be very wary of seeing the free market as a panacea here: One only needs to look at the  misery of many cotton farmers in (free-market) India, hopelessly indebted to (private sector) seed and agrochemical companies, to be reminded that given the opportunity, capitalism will always crush the little guy. To poor smallholder farmers, it makes little difference whether they are ruined by  private multinationals or by their government, and private labour agents have proven to be just as apt at forced labour exploitation as governments. I am looking forward to learning more about the case of India in Lea Borromeo’s Cotton Film. The difference between India and Uzbekistan is that in India  you could  farm cotton sustainably if you wanted to, whereas in Uzbekistan you currently couldn’t.

In our conversation during the interview, Lea and I  noted  that laudable efforts to produce cotton more sustainably do exist today (e.g.  organic or fairtrade certifications, Better Cotton Initiative, Cotton Made in Africa) but they have not reached critical mass and they all struggle with traceability, as cotton would typically be blended at the spinning stage to produce yarn. So if companies really want to trace where their cotton comes from they should be  controlling the spinning mill – i.e. vertical integration.

If all cotton was farmed sustainably –  i.e. in areas not needing much irrigation, minimising agrochemicals and pesticides, and paying farmers a fair price and labourers decent wages – there would probably be  less cotton, and  it wouldn’t be quite as cheap. But would this be such as bad thing? E.g. , other natural fibers such as hemp  don’t need as much fertiliser and pesticides, and apparently there has been a lot of progress in making  these into textiles with  a similar quality and ‘feel’ to cotton.  But I think most importantly, we  on our Western high streets clearly consume more clothes (in any material) than can be produced in an environmentally and socially responsible manner.

Maybe we all need to buy a bit less, and pay a bit more. That would indeed be progress: Back in 1866, John Watts, in his book about the Lancashire cotton famine, commented that “people want cheap calico… and it may safely be affirmed that if the annihilation of slavery had depended upon the people of this Christian land paying knowingly one farthing per yard extra for free-labour calico, slavery would have gone on for ever”.

December has been rather taken up by travel, family visits  and Christmassy things, hence a bit quiet on the blog front…  Well, nothing like another event  to get me to focus again on Tangled Yarns! I’ll be giving an artist talk at the Gallery later this week, focusing on the stories behind the works in the show, particularly the social costs of the textile industry then and now. Meanwhile, I got a few pictures from the “Torn Justice” launch event mentioned in the previous post – Christmas decorations and all…

Another bit of great news about “Torn Justice”: The Mayor of  Waltham Forest, who attended the launch event, chose an image of one of the works for his 2014 Christmas card! 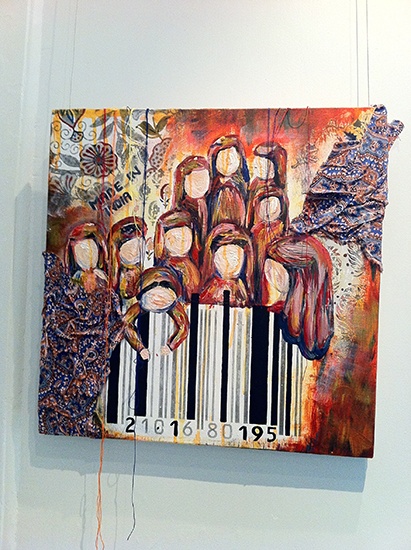 Finally, a couple of images from the opposite side of the globe: I was lucky  to get a chance to visit Ai Wei Wei’s current exhibition @Large on Alcatraz. I’d seen, and liked, quite a lot of his work over the years but  this is my favourite yet,  I think because the exhibition site – a former high-security prison – is so chillingly appropriate for the theme of the exhibition: a memento for human rights defenders standing up (and being jailed or worse) for  the freedom of expression. And he couldn’t even visit the site – how frustrating this must have been. Politically engaged art at its best; go see it if you can.

Alke Schmidt's work combines beautiful form with thought-provoking subject matter. Painting is often intertwined with the decorative patterns of found fabrics, stitch or print, selected for their historical, cultural or symbolic associations. Fusing the roles of the artist as maker and critical citizen, Alke uses the visually seductive qualities of her works to challenge contemporary social and environmental injustices. Her work also puts those issues in historical context, reflecting Alke's belief that we must engage with the past to understand - and improve - the world today. ​ In her latest projects, Alke has focused on engaging with historical museum collections and heritage sites, highlighting their contemporary relevance. Highlights included solo exhibitions exploring the politics of the global textile industry past and present at the William Morris Gallery (2014/15), the Cromford Mills World Heritage Site (2015), and the People’s History Museum (2017). Alke's latest project is "Wonder and Dread", an Arts Council England-supported solo exhibition at Bradford Industrial Museum (Dec 17- Nov 18) that will further investigate the textile industry, with a particular focus on the Bradford wool trade and how it affected people from around the world. The project will also include a proposal for new site-specific work at Salts Mill, Saltaire. Since completing her MA Fine Art at John Cass School of Art in London, Alke has exhibited widely in solo and group shows in the UK. Her work is in private collections in the UK and abroad as well as in the collections of the Arkwright Society, London's City Lit and Walthamstow's Vestry House Museum. www.alkeschmidt.com