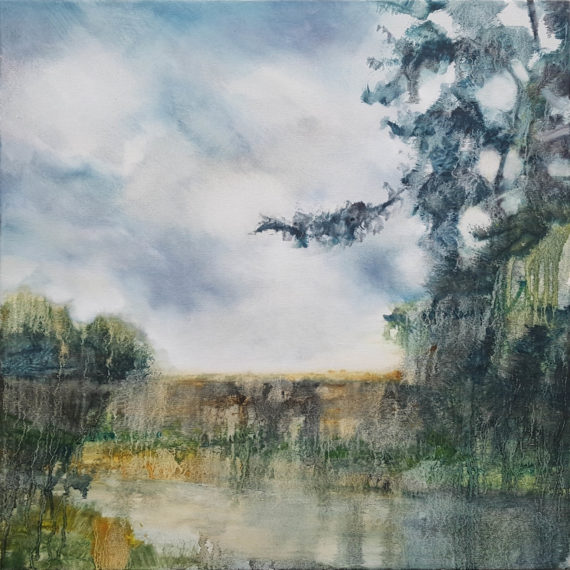 One drenched, gloomy morning a few weeks ago, we found ourselves on a rural-lane-detour around major roadworks en-route to the studio.

As I sat in the passenger seat, snapping photos from the window on my phone (a favourite way of getting randomly interesting images to base my landscape work on), inspiration started forming in my mind, slowly coming together from a few morsels I had rattling around in there.

How to develop my work to the next level is something I’ve been considering deeply lately.

Every artist wants to bring something new and fresh to the world, and create work explicitly in their own voice—I’m no exception.

Finding that voice, however, is the difficult task and often takes years of work.

My love of landscapes is a given—from tatty, angular, industrial spaces with texture and history, to outdoor scenes with a quirk about them: big windswept skies, or some notable feature that sums up a moment in my experience of the world.

I’m realising the essence I want to bring to my current work, the thread connecting these (perhaps diverse?) paintings is the atmosphere: a sense of the 3-dimensional space in both physical and emotional (and historical) terms. Lightness or foreboding, joy or melancholia. The weight of centuries-old iron, of patinated glass and brick. The icy rain battering your face or the sun neon-lighting grass.

I recently had a break from oils: instead, working on a large, well-over-a-metre-high watercolour.

It was an investigation into subject matter that was a tangent from my current work, but I also wanted to use it as a way of experimenting with my technique: of freeing myself up from the ‘rules’ of watercolour painting, and doing my own thing.

The large scale made all the difference, allowing me to be more expressive and work—physically (and mentally perhaps?)—more openly, and I took away some valuable discoveries.

I also realised 2 things by the end of the two-week stint painting that piece: 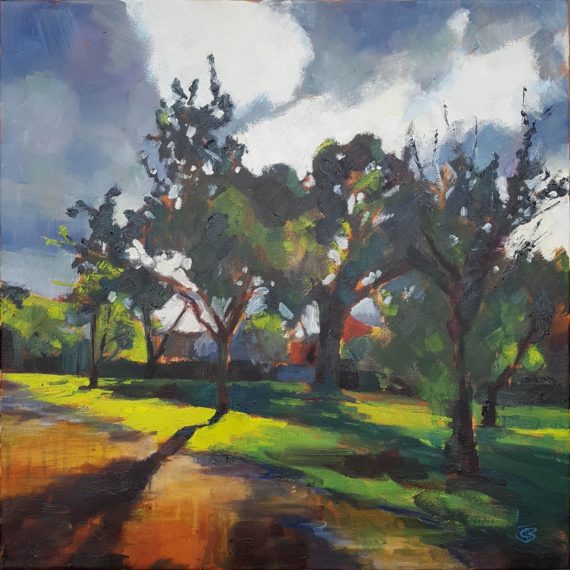 Over the last few months, I’ve been—very speculatively—entering my paintings into a few prize exhibitions and competitions.

There are literally hundreds to choose from—just in the UK—and they cover just about any medium, style of work, and career stage you can think of, so I did my research and found a handful suitable for my style of painting and career point.

I’ve had absolutely no expectations, aside from working on the theory that if my work is in front of a judging panel, it’s getting fresh eyes on it and reaching an audience who’ve never seen it before.

Even if didn’t make any shortlists, I’ve learnt more about the process of applying, and I can always enter again next year if I want to.

A few days ago as I quickly scanned my inbox, my eyes landed on an email from the New Light Art Prize.

I knew the notifications were to be announced that week.

And after not reaching the shortlists for two other exhibitions recently, I’d no expectations of it going anywhere.

I quickly scanned the ‘standard response’ part of the email, expecting to find the …’unfortunately you were not successful on this occasion‘… part.

So I re-read everything more slowly.

I was stunned to discover both the paintings I’d submitted have been shortlisted for the prize exhibition! It felt decidedly odd at the time, shock, I guess, but now the news has sunk in, I’m absolutely over the moon. 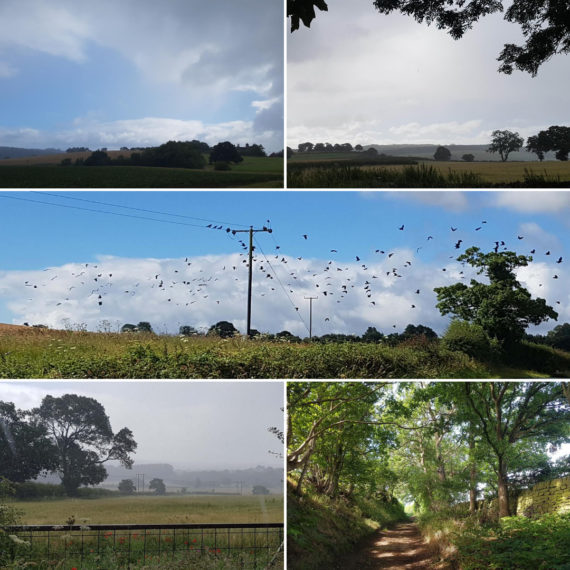 With life being a bit busy of late, last week I realised I hadn’t been out walking with my phone camera and sketchbook for a while. So in pursuit of recording the changing environment and invoking some summery inspiration, I ventured into the local countryside.

The idea was to find some big skies, golden fields, atmospheric effects or quirky features to record, and get some colour guidance for up-coming paintings with variations in my colour palette to reflect the current season.

About 5 minutes into my walk, from a fantastic vantage point, I could literally see the clouds rolling in, engulfing the big blue sky and dumping a fine, but soakingly persistent rain over the area.

Which, it turned out, made for a tons more interesting landscape than glorious summer sun and big blue skies.

The blanket of mist-like rain created fascinating layers in the receding landscape, faded bright colours into muted tones, and churned up the sky into glorious dark purples and greeny-greys.

A bonus about going for walks when it’s raining is that I’m usually alone with my own thoughts—and that’s utterly blissful.

The only noise I heard was the rustle-tramp-rustle-tramp of my waterproofs as the hood rubbed against my ears with the rhythm of my steps, and later, as the sun revealed itself, the caws of a rising flock of crows, disturbed in a field as I walked past. Not a dog walker, rambling group, or runner to be seen.

I took loads of photos, as per normal. After an hours’ walk, I’ll easily come back with over 150 photos, loads of which I’ll end up discarding after I’ve worked through them.

All the shots you can see in the header photo I’ve deliberately left un-edited, because I want them to be a realistic record to use as inspiration, rather than working directly from them to make paintings.

Sometimes I see gates, telegraph poles (with those oddly compelling yellow Danger of Death signs on them) and jarring man-made installations that creep into shots. Some incidental features I don’t see until I’m going through the photos on my large screen afterwards, but they may later find their way into work composed from a few different scenes.

On other occasions, peculiarities jump out at me with their incongruity—of synthetic objects to the organic material surrounding them or because they’re fleeting atmospheric moments, or transient occurrences of nature going about its business.

After graduating from the University of Huddersfield with a BA (Hons) Fine Art in 2000, Julia reluctantly drifted away from full-time painting for a number of years, first working as a concept artist, graphic designer, and then running her own book design and illustration business, Brown Owl Design. The return to her fine-art roots has come gradually but passionately over the last few years, culminating in the decision to dedicate herself full-time to her practice after finding representation with galleries and growing interest in her work. “My current work explores spaces, landscapes and structures—man-made or organic, and the interplay of one against and within the other. How man has stamped his boots on the earth, built monumental engineering and architecture, constructed environments, and populated landscapes, later discarding those creations and moving on when use has been fulfilled. The story of those left-behind places is frequently an interesting one—whether it's a story of decay and return to the earth, or one of life breathed back and a renewed purpose given. I want the shapes I describe to be something both intangible yet instantly recognisable—solid objects, the space in between them, or an atmosphere created by light, shade and colour.”