2021 – How was it for you? #2: Emily Speed, artist exploring the body and its relationship to architecture - a-n The Artists Information Company 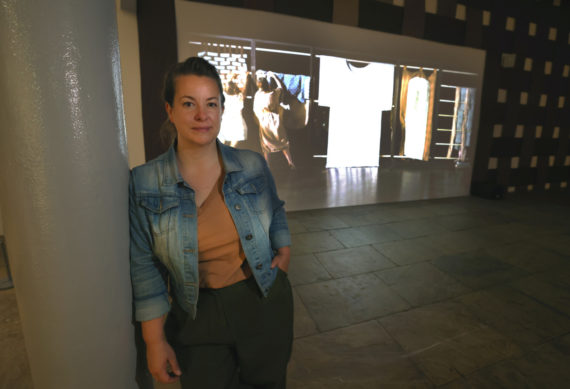 Liverpool based artist Emily Speed‘s work explores the relationship between people and buildings and in particular the body and its relationship to architecture. She discusses what she has achieved over the last 12 months, including her first major solo exhibition in a UK gallery at Tate Liverpool, and her plans for 2022, with a-n Writer Development member Orla Foster.

What kind of a year has 2021 been for you?
2021 feels like the same year as 2020. Time has got sludgy, hasn’t it? It’s been a year characterised by swathes of being unable to work, feeling stuck and waiting for things to happen, and then really intense weeks that have left me with adrenaline poisoning. I was incredibly relieved to get one of the government self-employed grants, but also envious of people who had lots of time in the studio. My son was at home from nursery and then school so I was working on evenings and weekends, which felt relentless.

What has changed for the better?
Personally, I’ve been able to get more balance, which is great in terms of family and work. As for the arts, I think there are things we’ve learned from the pandemic that have led us to make things a bit more accessible. I hope that stays, but I already see it’s kind of wavering off a little bit.

What do you wish had happened this year that didn’t happen?
Politically, there are so many things that seem like very regressive steps. I think there’s a collective sense of dread or loss that we’re all experiencing, and it’s hard to live with. Something that definitely didn’t improve in the last year is artists’ livelihoods. Personally, I’m trying not to dwell on negative things too much, but there are also commissions I wish had happened: things I was shortlisted for but maybe wasn’t in the right place to make happen.

What would you characterise as your major achievement this year and why?
I’ve just opened Flatland, a commission for Tate Liverpool. It was brewing for a long time, so it feels really good to finally get it out of my head and into the gallery. The film is inspired by Edwin Abbott’s 1884 novella ‘Flatland’, a satire of Victorian society, where all existence is limited to two dimensions and women are restricted to thin, straight lines. The book was my starting point, but I had lots of ideas around moving image and how to bring that into a performative space.

In 2013 I did a choreography workshop rooted in the same idea, so when I applied to the open call, I really felt certain about I wanted to do. But in the end, there was no choreographer. I had two weeks’ notice before the film shoot to gather together people I thought would really understand it, and who would bring themselves to the work too. I couldn’t have done it alone.

How did you turn the original story on its head?
Some of the book is so abstract that it’s really difficult to conceive of. For me, the concept of Flatland was something to push against, because the women in it are so subjugated and so undervalued. I wanted to expand them into very unflat, very complex, very luminous creatures. The women exist in a structure which is very linear, but they add to it and change it, which you can read as a metaphor for for much bigger things. Hopefully.

How will this experience have an impact on your work?
You know, it’s difficult after a big opportunity, because you’ve got this amazing budget and support, then afterwards you go straight back to zero. In a way it’s quite a shock. But you also need to take stock and reflect and rest a little bit after something like that, so I’ll be trying to think about what was great and what I loved about the experience. It’s been a real journey and a good lesson in thinking about how I would like to work.

When the show was delayed due to COVID, were you worried it wouldn’t go ahead? Did you discuss different ways of delivering it?
There was always this eternal optimism that the show would be in the real world. However, it made me think very carefully about having audio descriptions, and other ways of experiencing the work that could be disseminated a bit more widely. There were some really fruitful conversations. Also, a film is something that could transcend an exhibition space if it needed to. I was thinking about how the film itself is a legacy of the work, because it still exists. I didn’t want to make something that would end up in a skip.

The installation includes garments from the film. Do these have a different impact when they aren’t being worn?
There’s something about an empty garment that obviously speaks of absence. It’s interesting having them in the gallery because I think they have a texture you don’t experience in the film, but I also realise that at some point, they might not be shown together, and they don’t always have to be tied to each other. I’m desperate to see objects again at the moment, so there’s an enjoyment in the materials themselves which I wanted to share.

Have you worn your own work? Does it feel really delicate and sculptural or is it something you can easily move around in?
I first wore my work in 2009, for a piece called Inhabitant. I was in Austria, it was hot and sunny and I hadn’t made any eyeholes. I very quickly realised that I wanted to direct the work rather than be in it.

Is there anything you’d like to have done but haven’t?
Have a holiday. It’s quite trite, isn’t it? But a change of scene would have been really, really good.

What are you looking forward to in 2022?
2022 is quite a blank slate at the moment, which is so exciting because that’s not happened for ages. I got a Developing your Creative Practice grant halfway through the year and started learning to build with cob, so in 2022 I’d like to continue that. It’s a form of building that’s completely natural and has zero emissions. It’s just so enjoyable to start really making things again and thinking on a more architectural scale.