30 years of Castlefield Gallery: “People decided to club together and do something” - a-n The Artists Information Company 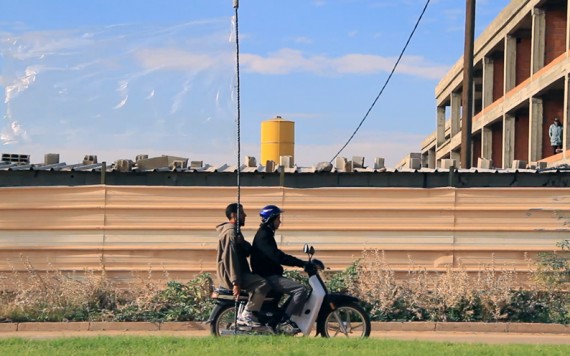 Castlefield Gallery marks its 30th anniversary this year, a milestone that is testament to the energy and determination of its founders and staff. And as befits an organisation that has been at the forefront of many new developments in the city’s art scene, it is celebrating by looking forward rather than back.

For the exhibition 30 Years of the Future, the gallery has asked prominent contemporary artists, curators and thinkers who have contributed to its history to nominate artists who they consider to be shaping the future of contemporary art. With 14 nominators including Ryan Gander, Hans Ulrich Obrist, JJ Charlesworth and Bob and Roberta Smith, the show features 16 artists working across sculpture, film, painting and performance.

The history of Castlefield Gallery is both fascinating and heartwarming. As an organisation it has celebrated many successes, been proactive and reactive, and has also suffered temporary upset along its journey. Founded in 1984 by artists from the Manchester Artists Studio Association, it was launched to address the need for more exhibition space within the city.

Lee describes the founding members’ mandate as being simple: “It was about giving a platform for emerging artists.” Much has changed and developed for Castlefield since then but the mandate has remained, establishing it as a prominent organisation within the Manchester art scene. “Manchester has potential because of the depths of artists that are here,” says Lee. “The city has been consistently vibrant, there has always been an active artist-led scene.”

Castlefield Gallery moved from its original space (pictured below) into the current, purpose-built building on Hewitt Street (above) in 2002 . It has continued to make ambitious exhibitions, with a programme responding to national and international trends. Programme manager Matthew Pendergast believes that good timing is key. When looking for artists to work with, he thinks about where an artist is in their development and “whether the show that we are thinking of putting them in is right at that point”.

This approach of waiting for the right moment to exhibit an artist is crucial to understanding how Castlefield Gallery operates. Keeping a dialogue with artists in northern England and the rest of the UK allows the gallery to promote work from artists at vital stages in their careers. This includes mixing and linking national and regionally-based artists in their popular Head to Head exhibition series, which Lee describes as an opportunity to “invite one emerging artist and one established artist, where we see scope and a common interest but [the artists] haven’t ever worked together.”

In 2010, Manchester-based artist David Gledhill showed work alongside Glasgow-based Corin Sworn in a two-person exhibition – an early version of the Head to Head shows. Gledhill, who recently penned an open letter to the city’s art institutions calling for more opportunities for local artists, is fulsome in his praise for the gallery. “Castlefield Gallery has been instrumental in all of the key developments in the region and is held in extremely high esteem by the artists of the city,” he says. “[The gallery] leads the effort to make Manchester a sustainable prospect as a base for artists to work and to build a career.”

Sworn, who won the 2013-15 Max Mara Art Prize for Women, is one of the selectors for 30 Years of the Future. Another is the artist Pavel Büchler, Professor of Fine Art on the MA programme at Manchester School of Art. He is clear on the importance of the gallery to the city’s artists: “Castlefield is the only public gallery in Manchester which responds to the interests and aspirations of the many young and early career artists working in the city, and which actively tries to help the local artistic community to maintain a sense of connection with the developments elsewhere.”

Büchler selected Manchester-based Greek artist Evangelia Spiliopoulou for inclusion in the exhibition. She asserts that Castlefield always demonstrates “a focus on the quality of their programme and keeps up-to-date with the contemporary cultural debate.” She believes this is an important role for a regional institution, adding that “Castlefield Gallery has anticipated this role and has been loyal to it”.

Spiliopoulou, who completed her MA Fine Art at Manchester School of Art in 2009, chose to study in the city thanks to its cultural history. “There was a sustained belief in the necessity to make work whether it is artistic work or factory work with which I connected culturally and socially,” she says. Manchester’s DIY attitude is well known, and it is this approach that has created a vibrant arts ecology within the city. Lee considers Castlefield Gallery’s founders to be part of that energy and culture. “Maybe it was because there was nothing here, so people decided to club together and do something.”

That DIY approach came to the fore in 2011 when Castlefield lost its National Portfolio Organisation (NPO) funding from Arts Council England. It prompted a rethink of the gallery’s strategies and an extensive plan was drawn up with the help of external consultants.

The time without regular ACE funding has been used wisely. The gallery has  developed its New Art Spaces initiative and opened Federation House in the city centre, as well as other facilities for artists within the region. Having now regained NPO funding (2015-18), the gallery is in a position to grow and continue to deliver thought-provoking exhibitions.

While the period that followed the 2011 news was traumatic – “We nearly closed!” explains Lee – getting NPO funding this time was “a mixture of relief and disbelief because it didn’t feel real”. Ultimately, though, the experience has made the gallery stronger, and Lee believes that it is now “more reactive and responsible”.

During Castlefield Gallery’s lifetime, many exciting art spaces, studios, commercial galleries, artist development agencies and project spaces have opened in the city. Recently, a network of visual arts institutions and individuals has come together to create more opportunities for artists. Within Contemporary Visual Arts Manchester (CVAM) there are representatives from the largest and the smallest organisations in the city. Lee acts as chair for CVAM. “Nothing beats face-to-face contact,” he says. “When people are introduced to each other, more often that not something happens.”

The future for the gallery looks exciting and promising. It is collaborating with Manchester Metropolitan University’s MIRIAD (Manchester Institute for Research and Innovation in Art and Design) to capture all artist-led activity within the city from the last 30 years. Together they aim to map and document opportunities for artists to continue their professional development in Greater Manchester and beyond, giving exposure to the city’s rich and diverse artistic history. Castlefield will also be developing international exchanges as well as continuing to curate the gallery, facilitating pop-up spaces and organising the evolution of its CG Associates programme.

Castlefield is an active bridge between the different organisations, artists and institutions within the city, drawing upon its 30 years of extensive knowledge and experience: mentoring, brokering, training, networking and programming. Lee believes that it acts as a central part to a network. “We often talk to institutions that don’t understand the value of artist-led activity and introduce them to the significance of artist-led or grass roots independent activity,” he explains.

Castlefield Gallery was and still is pioneering in its approach – here’s to another successful 30 years.

Manchester’s new art space: “It will respond to the needs of artists” – Bob Dickinson reports on the opening of Federation House in the city centre