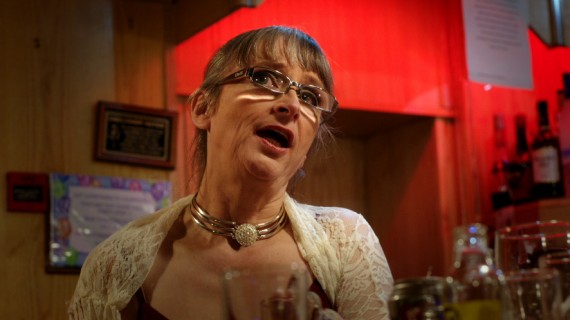 Phil Collins’ film installation Tomorrow Is Always Too Long, which is currently on show at Gallery of Modern Art Glasgow (GoMA), portrays a day in life of the city reflected through its inhabitants and the communities into which they form themselves.

The Runcorn-born and now Berlin-based artist was commissioned to make the original 82-minute film by Glasgow’s The Common Guild – it premiered in the city’s Queen’s Park as a one-off outdoor event during the Commonwealth Games cultural programme, Festival 2014.

Described as ‘a dolly mixture of musical numbers, animation and a uniquely Glaswegian cable TV station’, Tomorrow Is Always Too Long was made in collaboration with a number of local community groups including newborns, club kids, prison inmates and activist pensioners.

Presented at GoMA as a gallery installation for the first time, the film now includes a previously unseen intermission featuring the Glasgow band Golden Teacher, along with a number of new elements such as a mural and a poster wall.

Tomorrow is Always Too Long has been described as a ‘love letter to Glasgow’. Is that a description you’d agree with and if so, what prompted you to create a love letter to the city?
It’s not difficult to fall in love with a city like Glasgow. Warm, lyrical, caustic and tender all at the same time? All the time? Tick. Ready to take you out on a long night out and not drop you home until next year (31 December not included in this offer)? Tick. Scotch and Wry, Barrowland, Mogwai, Molly Weir, Still Game, Ewan Morrison, Life Without Buildings, Limmy, Subclub. Tick. Tick. Tick.

My family’s from Dennistoun so I’ve known Glasgow all my life. So when I was invited by The Common Guild to make a work for Festival 2014 as part of the Commonwealth Games, I dropped my shopping bags and made for the nearest airport. I got out my Basildon Bond notepad, chewed on the end of my ballpoint, and began.

Can you explain a little about the process you went through to create the film, in particular the people who ‘star’ in it, from the young couple with a newborn baby to a young man going into and leaving Barlinnie Prison? Presumably the filming took place over a relatively long period of time?
I live in Berlin and in Wuppertal (I know! Home of Friedrich Engels and it’s got a hanging train), but was back in Glasgow for a year so I could have regular contact with people who ended up in the film. I was interested in looking at institutions – such as maternity hospitals, schools, the prison, retirement homes and old folks discos – semi-public spaces which are very much part of the social fabric, but which largely remain kind of invisible. You might be aware of them but don’t necessarily visit or even know what they actually look like. I also wanted to engage with people of different ages, from newborns to pensioners.

Like in my previous works, the engagement with people is always the crucial and most time-consuming aspect – to gradually find and ‘cast’ the subjects, not in a conventional sense of auditions, but through continuity, dialogue and simply spending time together. I’ve had a good fortune to meet so many amazing people, and each encounter and exchange along the way have been a riot to say the least. If the film can communicate a fraction of the joy I’ve had in making it, I’ll die a happy man.

I found the monologue by the veiled tarot reader particularly powerful, but at the same time it stands out from the rest of the film in its angry tone and the way it’s delivered. Can you explain a little about this segment, how it came about and its importance to the film’s narrative?
Psychic Mindy is a character I’d been thinking about for a long time. I’d made a live teleshopping show for German TV in 2011 where members of the public could buy experiences for the bargain price of 9.99 euro (20% discount off for pensioners, students and the unemployed). The very next night they could be – and were – live on television taking part in one of several fantasies offered to the German-speaking public: a Stasi-style interrogation, a gay and lesbian historical sex scene set in the 19th century, or the swift descent into a coma in a hospital bed after insulting all your family and friends. Mindy, in a way, comes out of this. I’d written this part specifically for Kate Dickie who I know well and met in rehearsals for a theatre show at Tramway, Glasgow, 20 years ago. I wanted a central axis around which the film would revolve. Because of its direct address and intensity, Mindy’s speech becomes a memorable moment in a film about forgetting. Funny you find it so hostile, I find it warm.

Pop culture – and pop music specifically – features a lot in your work, and does again in this film. As an artist working in a contemporary art context, how important is music to what you do?
For me, there’s an undeniable transformative power in a pop song, an ability to tilt even the most mundane situation into the realm of the extraordinary and of heartbreak. It’s a form of artifice in some ways more authentic than ‘real’ emotion. For the last few projects, I collaborated with musicians and I find these dialogues incredibly inspiring. They tend to open up the work in an expected direction or give it another form, especially when it comes to developing original compositions. I rarely approach music as a literal score, created in response to the image once it’s been locked off. Instead, image and sound develop in parallel and music can often influence the way something gets edited or even shot.

Of course, the music was always going to be an essential part of a film about Glasgow. It’s one of those places where it seems to run in the water, like Manchester or Berlin – switch on a tap and it sings. So, with the musical sequences in the film, I wanted to imagine the real through the frame of music, and make something where song emerges from a living, breathing, working space. It was important that the people I met sang the songs themselves, not mime to them, which took a lot of time and patience, and trust, dedication and bravery on their part, to get to the point at which they sound like they do, but I think you can feel their exhilaration and joy in giving these extraordinary performances. If the film can be described to function, like some have suggested, as an update on the idea of a city symphony, it does very literally so, through the voices of its inhabitants.

Can you explain a little about working with Cate Le Bon and how the music was conceived in relation to the scenes in the film?
Cate is a friend of mine. I met her a few years ago after having seen her gigs at the Royal Festival Hall and at the Shepherd’s Bush Empire. With one swish of her black-and-silver designer cape and a note in a voice occasionally slightly lower than mine, my heart was removed from its casing and trampled on, so I was never quite the same again. Cate is a truly original artist who can turn the simplest observations into poetic and abstract chimeras, so her music instinctively felt right for the scope of emotions and experiences that I wanted to address. The songs in the film are from her album called Mug Museum which, to everyone who’s had the good fortune to be assailed by it, is a modern classic. It’s one of those records which should be given out to schoolchildren as a guide to the melancholy of modern living. Cate, very generously, let me pick a selection of songs and I worked with Ian Stephens and the Royal Scottish National Orchestra on arranging them as symphonic scores for the film’s musical numbers in which I invited people I met to record their own interpretations.

Tomorrow is Always Too Long was commissioned for a one-off screening in a Glasgow park. How much did that context impact on the making of the film? It does, for example, feel very much like it’s made for the big screen.
The location and the context were important in thinking through the production, the look and the feel of the film. The general idea developed from discussions I had with Katrina Brown about Queen’s Park and its derelict band stand. It’s such an important place for various social histories, with a long tradition of public events and gatherings. There is this beautiful footage of Paul Robeson visiting the Clydeside workers on a May Day march there in the ’60s, which somehow felt to express a sense of community and solidarity which, to me, is characteristic of the city on the whole. We ended up using some of this footage in the film and the site on which it premiered last summer was actually the same spot which you see in those reels, so there were all these resonances which might not seem obvious but were inspirational in figuring out the conceptual approach.

Was there always the intention or hope to present it again in a gallery context, or is this something that has presented itself after the event?
The local context is central to all my projects, but so is the wish that they should have a life afterwards as well. So yes, I always approach them with a more universal aim in mind and with the intention to be show widely, to different audiences and, potentially, in different configurations.

And why GoMA? There’s clearly a lot of thought gone into the staging of it, from the large scale screen to the deck chairs.
I was delighted when GoMA invited me to present Tomorrow Is Always Too Long as a gallery installation. For me it’s essential that the work maintains a strong and meaningful connection to its original context. Glasgow is, after all, its home, and I couldn’t have wished for a better living room to show it in. I wanted this presentation to be special and to provide an experience evocative of, but also different to, last year’s outing. So we re-thought from scratch, and have introduced new elements, such as the mural by Ivana Kličković (who designed the original titles for the film), the poster wall, a flush of socialist-red carpet and, crucially, a previously unseen clip featuring the inimitable Golden Teacher, who I filmed last year at Langside Hall in Queen’s Park. Now their amazing track Shatter and the band’s hypnotic performance act as a disorienting intermission between each loop of the film.

Your work is often full of people and essentially about people and their social/political situations. Would you say you were an optimist when it comes to the human condition?
I suppose I am genuinely interested in people. I think that we’re such a contradictory, impulsive, lost, strange species that it’s almost endlessly absorbing to think about how we spend our time slowly revolving on this planet. These are very strange times that we live in and I’m not sure what to think about the human condition. But I do like to observe. And I think a lot about others. I sit in a darkened room twiddling my thumbs, thinking about people.

And finally, what’s next?
This year and next I’ll be working on a film about the end of the oil-era prosperity in Norway and an experimental piece in Berlin relating to Peter Weiss’ notion of the aesthetics of resistance.

Tomorrow Is Always Too Long continues at Gallery of Modern Art Glasgow, until 16 August 2015. events.glasgowlife.org.uk