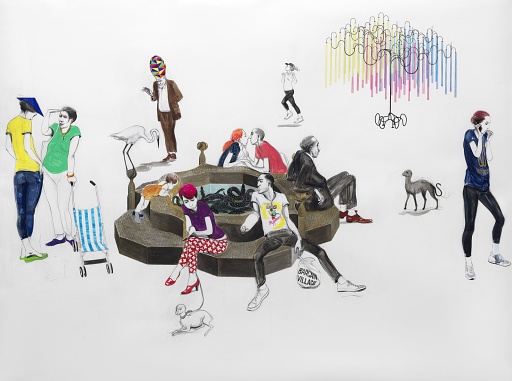 The Scottish artist Charles Avery has spent his life developing the constantly evolving project, The Islanders. Dedicated to describing the inhabitants, flora and fauna of a fictional island, it is a growing body of work featuring drawing, sculpture and film.

Having exhibited as widely as London, Turin, Amsterdam, Paris, Geneva and Taipei, this summer Avery is bringing the project to the Edinburgh Art Festival. He will present a site-specific commission at the city’s Waverley railway station as part of the festival’s ‘Improbable City’ theme, as well as an exhibition of new work at The Ingleby Gallery.

How and why did you become involved in the Edinburgh Art Festival?
Sorcha Carey, the director of the art festival’s programme, approached me with a view to doing a public commission in the city for the festival. We spent a day walking around the town looking at potential sites and seeking inspiration. Site-specific work is not really my thing and I’ve gone to great lengths to create a fictional structure wherein my work may find its relations independently of the meanings that it attracts once it leaves the studio. Ultimately, it was an exciting challenge to make work that is public-facing, whilst remaining internal and integral to my fictional Island.

The Islanders is an ongoing project. How has it evolved for the festival?
The piece for the festival is utterly objective, and such a counterpoint to my narrative. When my friend, the artist Richard Woods, first saw these things I was making he commented: “Sculpture is good because it is important to have something to put in the middle of the room.” I always remember this statement for its clarity and as a basic truth. This is something to put in the middle of the station. It is not an evolution, but an export, a souvenir, transplanted from the subjective realm to the public one to evince the substance of my fiction.

Why did you choose to exhibit at Waverley, Edinburgh’s main railway station?
I wanted to do something public facing and Waverley station ticked this box. The piece I am making is very big (five metres in height) and slender in structure, so the sheltered environment of the station is no bad thing. Beyond the practicalities it seemed entirely appropriate to place this product of a narrative in a station named after a book by Walter Scott (which I’ve not read, admittedly). My project as a whole resonates with the rationalist, humanist thrust of the Scottish Enlightenment so I am delighted by the context.

What do you hope the wider impact of the festival will have on Edinburgh?
Sorcha and her team are bringing a lot of great national and international artists to the city, at a time when Scotland is in the spotlight. Combined with strong programmes from established institutions such as The Fruitmarket Gallery, the Modern Art Gallery and Inverleith House, and following on from the enormously popular pan-Scotland exhibition Generation last year, one hopes for and expects a lasting legacy in terms of awareness of the value of contemporary art in all its forms, which will benefit the whole creative ecology of Scotland.

You have worked with the international curator and Palais de Tokyo co-founder Nicolas Bourriaud on a number of occasions. How has he influenced your development?
I think Nicolas would be horrified if he thought he had influenced me. He is a true maverick and I admire him immensely. The last time he came to my studio was in connection with a presentation at the Taipei Biennial: The Great Acceleration. He told me to do what I wanted, but I said that I needed more than that, even a word at the very least. He said “Wilderness” and I showed him a drawing, and he said “That’s it! The embodiment of my thesis!”

I feel an affinity, a sympathy, but I don’t think it amounts to influence. He loves ideas, big ideas, and so do I , but he also has a respect of quality and intuition and the artist. I feel that he encouraged me to follow my intuition. I once posed him what was for me a particularly intractable structural question in relation to my Islanders project, and he just told me not to answer it. No need.

What’s next?
I intend to spend the summer with my wife and our three daughters and my friend Ian (and whoever else we can rope in) building a natural swimming pool on the shore by our house on Mull.