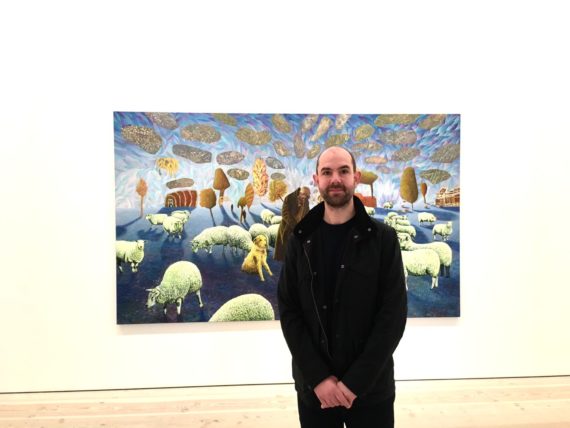 London-based painter David Brian Smith was born into a Shropshire farming family. Much of his work is informed by the experience of living on a farm, with a number of his latest paintings featuring the recurring image of a shepherd tending his flock.

The 35-year-old artist paints on herringbone linen because of its associations with rural heritage, flat caps and tweed jackets. He also employs a fierce work ethic, which he says is partly influenced by his father’s struggles to keep the farm afloat throughout his childhood.

The aim of the show is to showcase present-day painting, a medium that in recent times has been ‘challenged by the myriad of other modern media and technologies embraced by contemporary art.’

The show is focused completely on painting. Do you feel this is particularly timely?
I am so proud and humbled to be part of an exhibition with a real mix of established and new artists who focus on painting. For me, it’s exciting to possibly inspire the next generation of painters. When I was younger I was inspired by artists like Peter Doig and George Shaw. I remember Shaw giving a talk at Wolverhampton University where he said it was possible to make a living from art and I thought that was amazing. 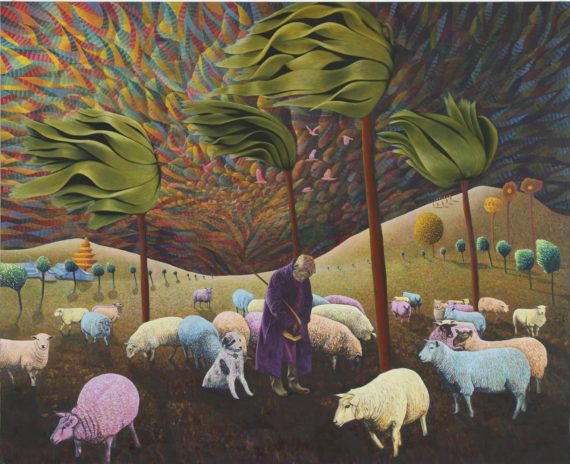 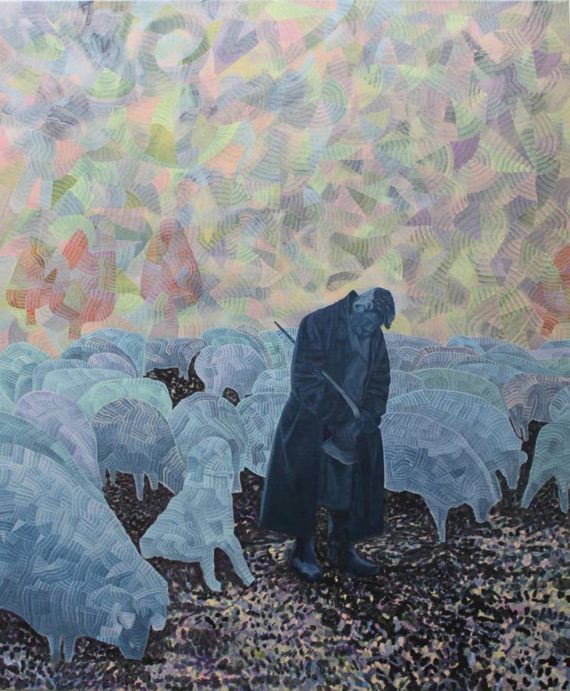 The paintings in the show continue your shepherd series. What are the origins of the work?
The roots of this series began with my father, who was a traditional shepherd, passing away in 2005. My nan also passed away shortly after and we had to sell the family farm and house my grandfather had built in Shropshire. I was selling tractors and trailors on eBay and also at a point where I didn’t feel anyone gave a shit about my work. I was making monochromatic abstract work and I just couldn’t make anyone stop and have a look. At the time, I felt angry about a lot of different things.

My mum moved to a new house and when she took up the carpet there was a newspaper from 1933 with some pressed flowers in it. It had an image of a shepherd amongst a flock of sheep to commemorate the armistice. She emailed me this figure of a shepherd with his head bowed, with a dog amongst a flock of sheep. It seemed to connect on a really personal level and has become a recurring theme ever since. 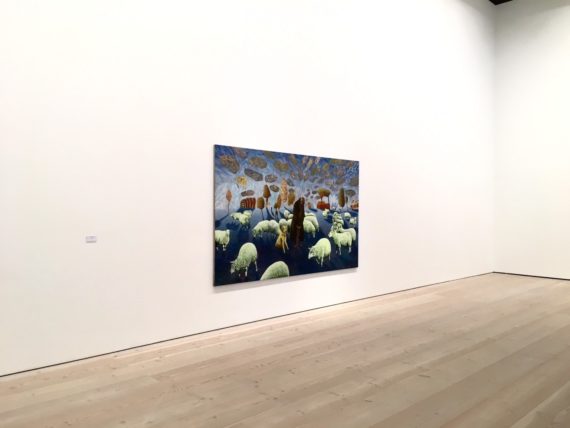 Is there any significant meaning behind your choice of materials?
I use heavy herringbone canvas which has obvious connotations with farming, tweed jackets and flat caps. It’s expensive to buy but it’s a fantastic surface to work on as it can soak up a lot of paint. If it wasn’t such a good material I wouldn’t use it.

Do you see any similarities between the life your father lead and yours as an artist?
Totally. His life was really fucking tough. My father basically manicured the sheep and the farm looked incredible. But behind closed doors we were broke – it was a nightmare having a small holding and we were constantly trying to diversify to survive. Effectively my mum’s market stall in Bridgnorth selling jams and preservatives that I helped her make kept the farm afloat for 15 years. We never had spending money because it all went back into the farm. It’s exactly the same with my life now as an artist.

One thing I really believe is having a strong work ethic. If you have a studio you need to actually be there making work. I know it’s tough and people might have other jobs supporting their career, but I find it really frustrating seeing studios sitting empty. I try to be at my studio at Acme six days out of seven each week. I can see who is coming in and not! Good quality cheap studio space in London is rare. If you’re not going to use it, give it to an artist who will. 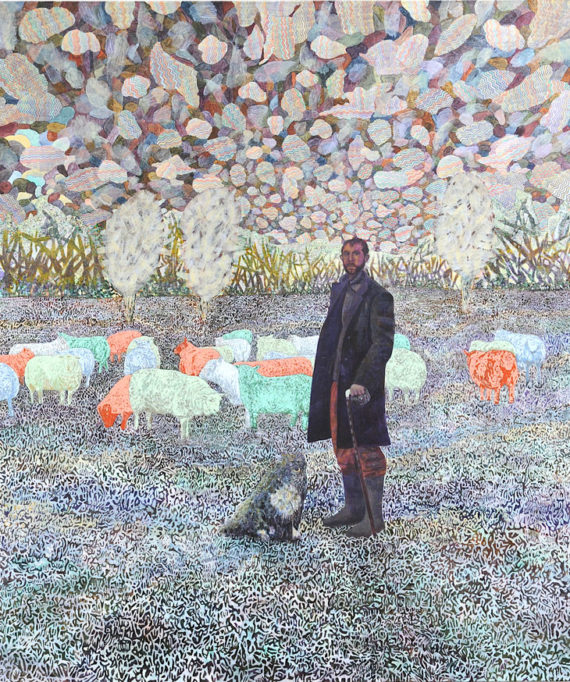 Do you ever envisage moving back to Shropshire?
I’ve got a dream of having a barn in the middle of a field one day. But I love London. I still struggle to call it home, possibly because there is a hangover from everything relating to selling the farm. It is worrying that a number of artists are leaving the city though. I’ve had a few friends move to places like Alicante in Spain and Germany, and I do agree that it is difficult to have a studio in zones one and two.

I find it pretty awful to be honest. I had a studio in Hackney Wick for nine years and our building was sold. Around 2012 with the Olympics more should have been done to preserve these spaces and create more affordable artists’ studios. On the flip side, it has opened up more possibilities further out from the centre of London, in areas like Catford, Barking and Essex.

Didn’t Charles Saatchi and Tracey Emin buy some of the early paintings?
Yes. I’d started to work on a larger scale and must have only painted about six before Charles Saatchi bought one. But by no means has it been all good since then. Looking back though, I originally thought I’d have to make 100 before anyone paid any attention. 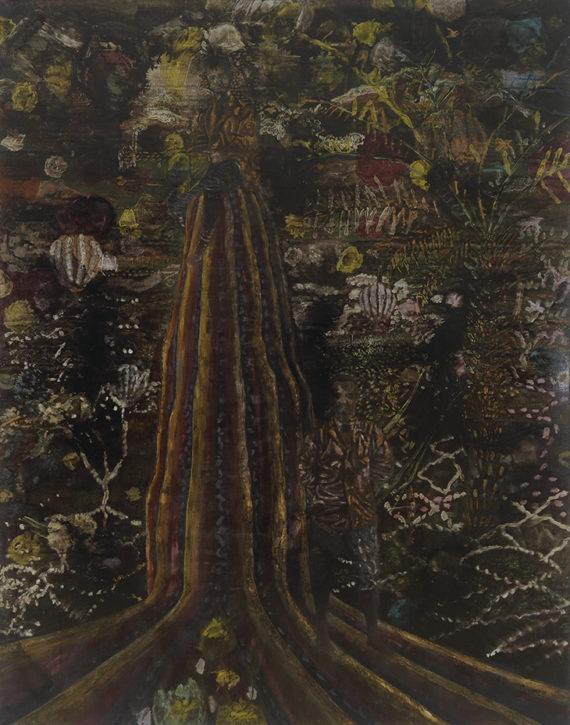 Can you imagine a point where you will stop the shepherd series?
In many ways the shepherd and flock provides a template through which to explore lots of different possibilities. I feel the same way about the colours that I use. For example, the most recent body of work I began around eight months ago. I took only three colours: blue, orange and yellow, but the palette is really broad. These things give me something to revert back to if I ever become stuck.

Some other recent work is derived from a batch of family snaps taken by my great grandfather, reminiscent of Gerhard Richter‘s series of paintings based on photos of his relations. However, my original plan was to make 100 of the shepherd paintings and I’ve only done between 25 and 30 so there is some way to go yet. I do ask myself whether I should stop but then I think, why should I?