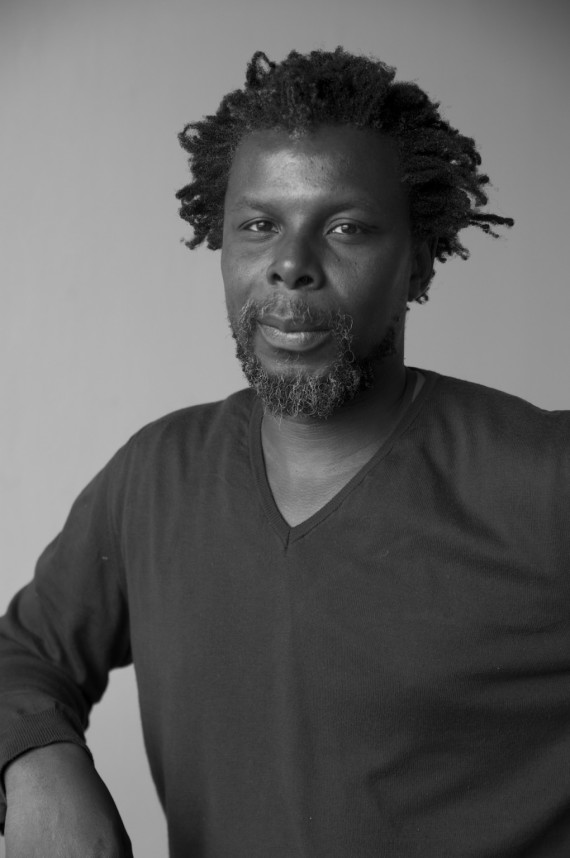 His work often returns to motifs like barbershop interiors and public parks, drawn from memories of his own upbringing in Birmingham during the 1970s and 1980s, or the bars and gardens of Trinidad, as glimpsed through the disruptive yet decorative geometries of metal security grilles.

‘Dub Versions’, his solo exhibition at Nottingham’s New Art Exchange, expands on two long-standing motifs, the barbershop interior and the municipal park landscape. The exhibition’s centrepiece, Is It OK To Be Black? (2016), was made in response to a commission to create a new work for the Arts Council Collection on the occasion of its 70th anniversary.

‘Dub Versions’ as a whole spans a wide range of geometric and painterly abstraction, figurative interiors and landscapes, studio drawings, works on paper and a large scale photographic collage.

As Anderson notes: “All the different elements are organised in the same way that they would be inside the pictorial space of a single painting. There’s a continuity between the individual parts and the whole body of work that is reflected in the exhibition.” 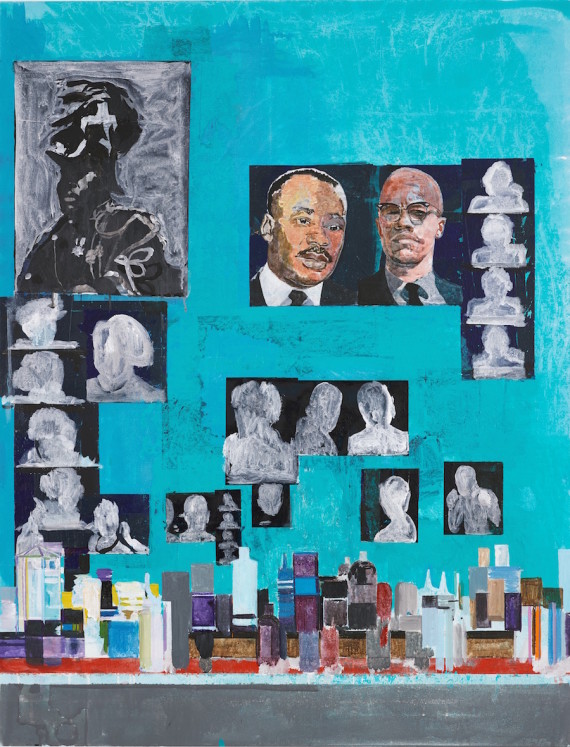 Looking at these studies of foliage from the Grafting series, I’m curious as to whether they relate to places with a specific meaning for yourself or the work?
The image that was the starting point for this series was triggered when I went to Jamaica and saw that it was a thing for kids to climb trees and pick fruit. In the Grafting paintings, it’s about me layering up my own memory of climbing trees in Birmingham, where I grew up, with some of the things I’ve been told about climbing trees in Jamaica. I’m trying to transmit this idea where two different sets of experiences, in different places at different times, can co-exist in one painting. In these Grafting images, they all began from two photographs, spliced together, which I’ve then tried to organise into a pictorial space.

The Grafting pieces obviously suggest landscapes, so could be seen as a contrast to the interiors of the barbershop paintings. But there seems to be a sense of landscape in those interiors that confounds this idea.
All the barbershop drawings and paintings are based on one particular place, and it has been used across a whole range of paintings, so it’s held a fascination for me for a long time now. And perhaps that idea of landscape is suggested by the way that my fascination came from remembering what it felt like to enter and be inside that space. When you walked in there were mirrors that reflected you and anyone else in the room. It was a space where you could enter, sit down, relax, and there would be a certain stillness in that. But in the reflections around you things would also seem to be moving faster. There would be a sense of movement rushing through this more peaceful kind of space, of the space running at two speeds simultaneously, and that is probably what really interested me. 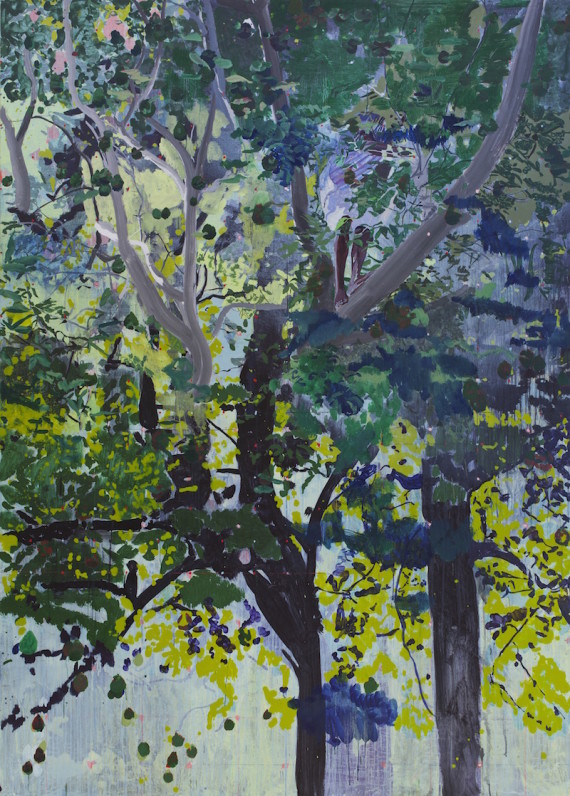 The degree of abstraction varies, too – is this where the dub analogy in the exhibition title comes from? This adding and subtraction of elements to create different versions of the two key motifs?
I just have this way of working where I’ll work on something and focus on certain elements at different times. I’ll pick at it for a while, maybe go over one spot in a painting for ages, trying to figure out why it looks the way it does, why my attention is caught in that one particular place. So the title is partly about that process, where I focus on one specific element at a time, as a dub producer would focus on one particular sound, cutting away everything else. More precisely, it’s because there are no figures in these paintings, as there always were in the actual barbershop. There’s that sense that the key element, the people, has been stripped out, as in a dub mix, where you might have the main thing about the song, which is often the lyrics, then take those away to give the music a different life of its own, a different form.

Is it important that the sound of dub is often spatial – it can be experienced as though it shapes a kind of architectural or physical space?
Yes, exactly. Those are the things I see as the possibilities that open up once you’ve stripped out that main element, the thing you’d usually focus on when looking or listening. Once you’ve taken away the voice from the song, say, or the figures from the interior, the things that would have previously seemed like the backgrounds can expand to take on their own importance and new meanings. 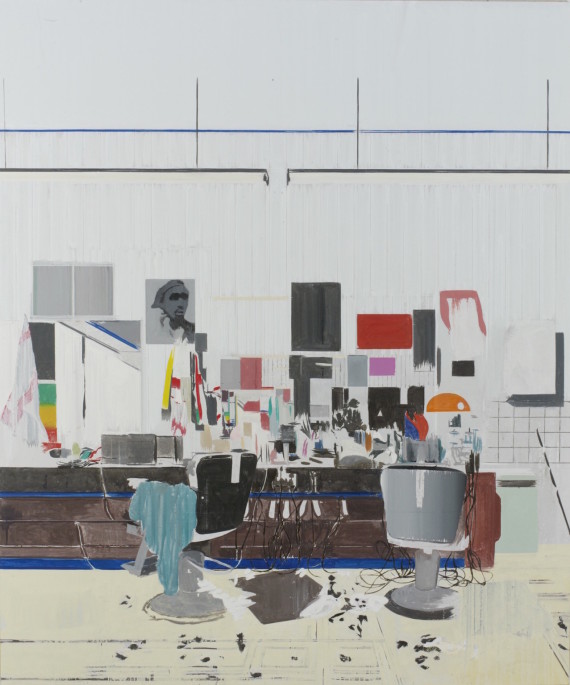 The title of the key painting here, Is It OK To Be Black? (2016), gives that work in particular a political dimension that seems more upfront than has been usual in your work to date.
I had the title for that painting before I made the work; even if the painting had ended up completely abstract it would still have had that same title. But its real significance, for me, is that there was so much happening in that barbershop space. There’s the space itself with the mirrors, then all of these images and photographs pinned up on the mirrors and walls. Some of these related to styles of hair, so had a practical use, while others… were figures from history and contemporary life, which then took on another meaning in this context. So the title was really about how those images on the walls seemed to be asking ‘who do you want to be?’, in a different way to the hairstyle portraits, but with a similar connection to all those questions of identity and representation.

Is that question there in the mirrors, too, even though your mirrors mostly don’t show reflections?
Yes and no, because although the mirrors are there, and they do have that obvious connection to identity and how we see ourselves, their presence in the paintings is more fundamentally about breaking up those spaces. You don’t dwell on the mirrors when you’re in that space, you become absorbed into them, but in a slightly different way to the photographic images. 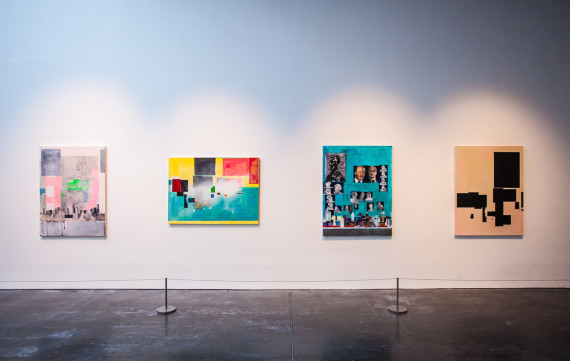 These paintings can often be read in formal ways, as a sort of pure painting, but obviously they do also have these representational aspects, which carry political and social meanings.
It’s always got to be a balance, hasn’t it? The most important thing is to allow one element to work with or against the other, without it becoming too detached or formal on the one hand, or too much about messages and content on the other. How I apply the paint to whatever the figurative subject is should always bring in another possibility through the way those different elements interact and converse with one another within the work. In Is It OK To Be Black?, what I’m specifically trying to suggest is that you know it’s a mirror, from the way it’s framed and painted, but what we see are the photographs rather than an explicit reflection. The question in the title is important, but the painting both is and isn’t more political than some of my usual ways of working. I’ve touched on these political questions and ideas before but this is the first time, I think, that I’ve really addressed those possibilities so directly – and this painting points to ways in which I might take those possibilities further in the future.

It’s interesting how that title has an effect on the way we read the more abstract kinds of painting around it.
I’m always interested in finding the point where you start to question the space, how you enter it, how you perceive it, the whole idea of what that space is and what it represents – so all of that comes into the more abstracted images as much as it does into the more obviously figurative ones. There is also a subtle political charge in the space itself, as it does have these multiple identities – the different activities within the space, the different images and elements making up that space, your relationship to that space. It’s hard not to see that space without some slightly political element getting in, just by the nature of the space itself – a Caribbean barbershop in the UK, a place that was all about creating identities through haircuts. 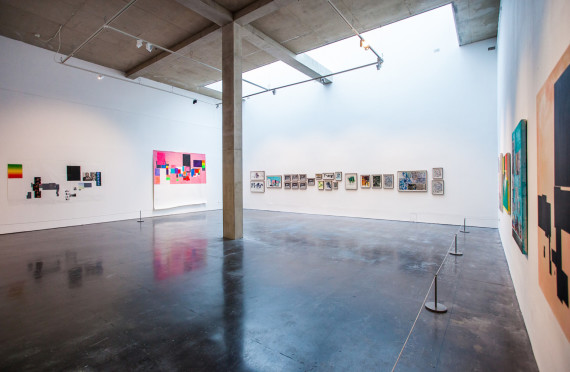 Is this political dimension something you’d see as being heightened by recent events: things like Black Lives Matter in the US, or the reports of increased tensions around immigration during the EU referendum campaign and its aftermath?
Yes, of course, a context of some kind will always be there, but it changes from one place or time to another. The Black Lives Matter movement is an important part of that, and there are obviously similar questions to be asked in the UK. The nature of these barbershops, as spaces created by Caribbean communities in the 1970s, is part of that history, and perhaps the paintings do draw some additional meanings from those contexts. But the spaces in the paintings are not limited by or confined to those contexts. These are spaces that also have equivalents in other places and cities, and the questions the paintings raise as paintings resonate more widely too.