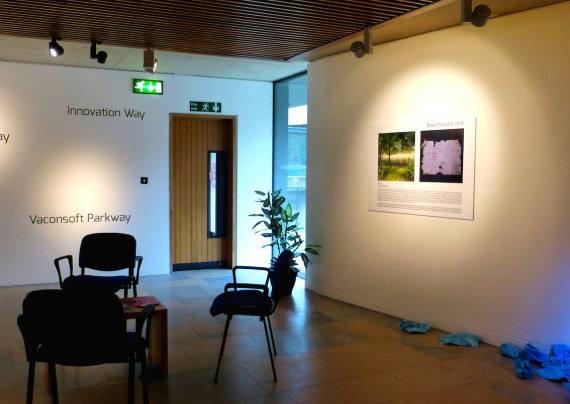 Marc Renshaw’s Europarc Project: In Search of Utopia is currently being shown at The Collection, Lincoln.

Amongst an artificial plant and a water fountain, the work is installed in the Courtyard Gallery as a contemplation space that subtly borders on a generic corporate waiting room and an art space.

Originally from the Isle of Man, Renshaw sees links with his own early life and his interest in the Europarc site – an ‘island’ of business activity on the outskirts of Grimsby.

“I’m not taking the piss but there’s always that element there,” he says. “How ironic is it? Certainly in the current climate there are always going to be connotations.” 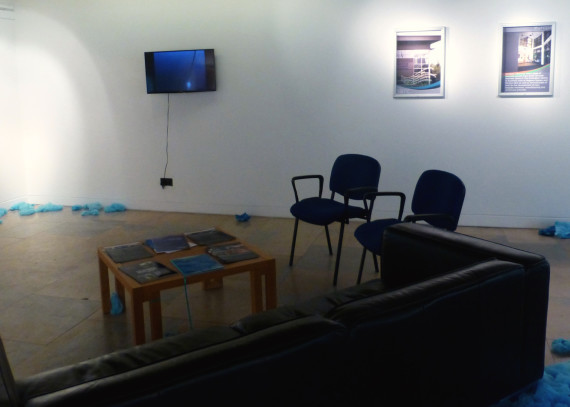 The audience are greeted by a map of place names based on areas of the site such as Origin 1, Genesis Way and Vaconsoft Parkway. What’s the intention behind this wall drawing?
I’m interested in some of these words – that may come from my upbringing in the Isle of Man, because the Europarc in itself is actually an island. There’s something about that islandness that interests me. When I was younger I used to be quite into football, and the evocative sounds of the [names of] European football teams stood out to me. It’s probably the same with some of these words as well. I worked in one of the Europarc factories once, Kerry Foods. Kerry was a name I’d never heard of and now it’s a Morrison’s factory. Evocative names ‘Kerry’, ‘Fabricom’, ‘Genesis’ – all these names that sound almost European, or otherworldly, and then Morrison’s gets dumped in there. I feel I’m losing something there.

Are you approaching the investigation of the site from a cynical point of view?
I’m trying to look at optimism within the idea of notions of capitalism. There’ll always be those coming at it from maybe a negative slant, but I’m looking at kind of a positive or optimism or hope, which is very much about my identity as well, and reflecting my identity onto a place.

How does that optimism sit with the feelings of loss you mentioned?
Within my character, and I think it’s about the identity thing as well, is the always hopeful, there’s always a possibility, you know? The optimism continues and the fuel is in the research. It’s that drilling down further. There were archaeological investigations on the site in 1996. I was interested in any artefacts but nothing had been found. Pre-enclosure the land was a marshland; more recently the undeveloped areas are reverting back to their natural marshland character. I’m now interested in going further back into the ecology of the land. What is this place? Whose identity is it?

Going back to the Isle on Man, one of my first trips as a kid was stopping off at Knutsford Service Station, or something like that. I thought ‘What the hell? What’s this all about?’ I was about 17 or 18, so again there’s something about youth and optimism and hope for the future. Being at the service station and thinking this is obviously something quite depressing. It’s lonely, it’s isolating – but then there is still something that allows me to build a platform to dream. This otherworldly place that I’d not come across before. 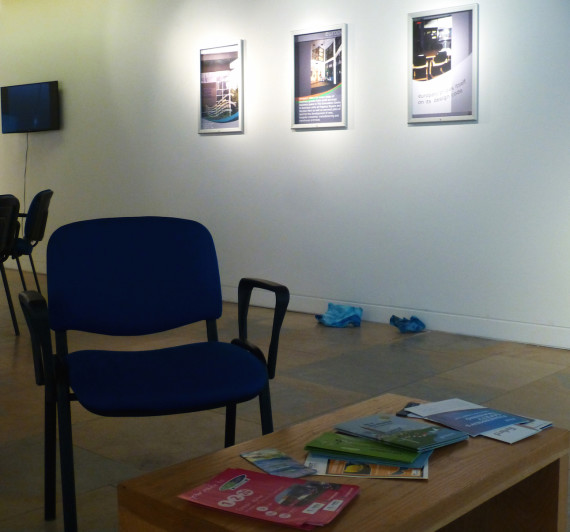 Why did you decide to focus specifically on Europarc?
Whereas previously I may have had to drive out to a service station to find that non-place, a kind of edge-place, here it’s right on my doorstep, or on the way home from work. At the time I’d moved up from Cambridge and there may have been some sort of uncertainty about my future. I remember coming across an article in the local newspaper and it mentioned Europarc and the words Innovation Centre were mentioned as well. For me, there was something in the name – it’s spelled Euro P-A-R-C as well. There’s something in the text. The idea that possibly Europe has been placed on the edge of Grimsby. It was almost church-like. ‘Europarc Cathedral’. I questioned it myself – if it was called Dunston Retail Park would I be interested in it?

Is anyone at Europarc aware of your project?
I wanted to find strategies that were more gentle and not really force something on anyone. I’ve attended a selection of bondholders networking events – just other ways of trying to gain access. Some people were quite interested, but the highly corporate ones were very difficult to penetrate; the more local ones were more open I think. Also on site there is a café as well, called Fresco Café. The general public can use it, so it’s legitimate to go and access it. You get your overalls alongside your suits. The café is just a bacon and egg type scenario, so less European and more British.

The word Europe is so topical. Are you conscious of it and do you think it affects the work at all?
It has made me think will people think I’m pro-Europe; it does add those questions. It’s coincidental but it is an interesting juncture. Outside of the political aspect, I have positive feelings about getting away, or going abroad, so again that optimism I think. Words and language can evoke something quite exotic for me. Anything sounding kind of European or futuristic may well hark back to my youth as a child in the Isle of Man, looking across to the mainland. You could actually see Sellafield [nuclear reprocessing site] on a clear day. My mind built up a sort of mechanical industrial wasteland. My mum was always very ‘England’s quite a scary place’, so there’s that kind of Bladerunner thing going on as well.

Could you describe any of the other work you do outside of this project, or is this the focus of your practice now?
This is my practice, I guess. My previous one was called The Sporting League, which was about an imaginary football league that I’d had since I was a kid. But for a number of years now, I’ve been interested in these kinds of non-places, liminal zones, transitional zones – places that allow me to dream and drift.

Europarc Project: In Search of Utopia continues at The Courtyard Gallery, The Collection, Lincoln until 27 March 2016. Marc Renshaw presents a day of ‘readings and reflections’ at the gallery on Saturday 12 March. www.marcrenshaw.com 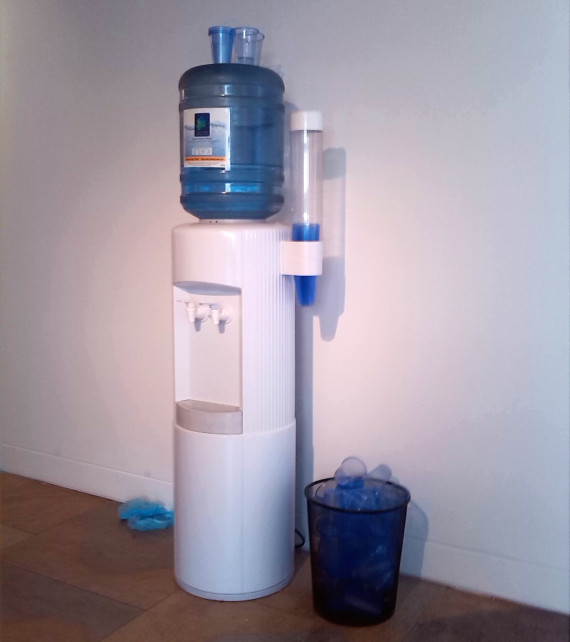 James Steventon is one of five a-n members participating in the inaugural a-n Writer Development Programme. He is an artist, writer and runner based in Northamptonshire. James is also Education Officer for Fermynwoods Contemporary Art, and a lecturer at The Sir John Cass Faculty of Art, Architecture and Design at London Metropolitan University.

For more information on the writer programme, and to read more of the writers’ work, visit the programme’s blog on a-n.co.uk and use the a-n writer development programme tag