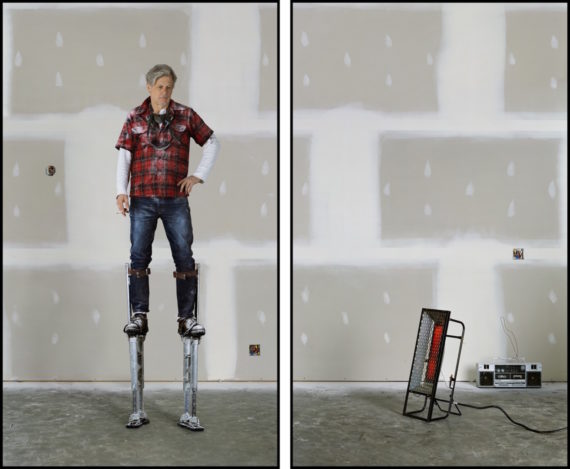 Born in 1949, Rodney Graham is a Vancouver-based artist and musician closely associated with the Vancouver School of ‘post-conceptual photography’ which emerged in the 1980s and included fellow Canadians Jeff Wall, with whom he also played in a band, and Stan Douglas.

As well as photography, Graham’s body of work encompasses text, music, film and installation. In terms of its intellectual interests, this has ranged from Freud to Wagner and Raymond Roussel.

For the last decade, Graham has concentrated on his meticulously rendered lightbox photographs, which are often inspired by old paintings or by things simply observed on the street. Though a photography assistant takes the image, Graham creates the set and poses as a character within the reconceptualised scene.

His current exhibition at Baltic, Gateshead includes works from 1994 to 2017 and is split across two floors of the gallery. Level 4 is showing a selection of five films, while level 3 features a large and varied selection of his lightbox photographs, including works made this year.

Graham has also just released a new album of music, Gondoliers, with The Rodney Graham Band. 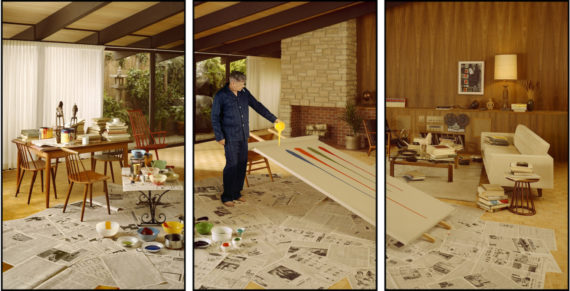 The last time we saw a big exhibition of your work in the UK was 15 years ago at the Whitechapel Gallery. It showed how diverse your practice was. Would you say there’s a thread connecting all the vastly disparate elements?
I guess there’s been a number of deviations from the straight-ahead path, but ultimately it’s been photography. I started in my career looking at the preconditions of photography and the history of photography, often using very simple amateur approaches, using Polaroid or building a camera obscura. I then went into conceptual work using text. I interpolated my text into other texts by thinkers and writers such as Freud or Edgar Allan Poe, inspired by what’s called appropriation strategies. Then I made a switch to performance-based work using photography with myself as a subject, starting with the video I made called Halcion Sleep (1994). The lightboxes are what I’ve been doing lately, and I like the clarity of them. I’ve kind of simplified things a little since the Whitechapel show.

You mention your first film Halcion Sleep. You’re showing this and other films such as 2003’s Rheinmetall/Victoria8 at Baltic, but you’ve now stepped back from filmmaking. Why is that?
Filmmaking is difficult, and I guess as it became more difficult I became less interested in doing it. I just don’t have a deep conviction which, say, an artist like Tacita Dean has, which is really admirable. Also, I’ve just lost interest in what’s involved in watching a film in a gallery context – it seems very artificial, having to darken the room to create a special atmosphere. I like dealing with a brightly lit space. 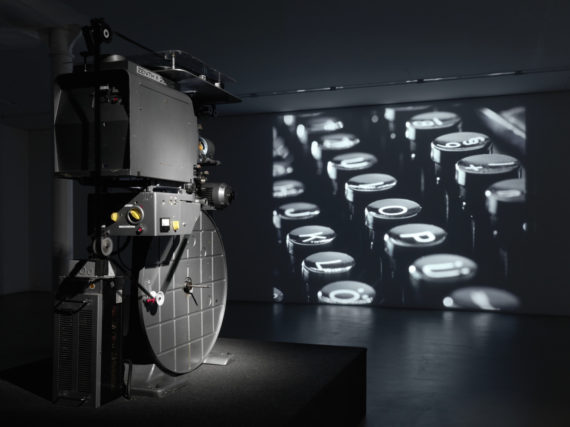 Do you think it’s also to do with the fact you’re much more interested in stories than Tacita Dean, whose focus is on the materiality of film?
Yes, I think so. I don’t have a strong technical base to my work. In my photographic work I always work with a photographer; I don’t take the pictures myself. In fact, I don’t even own a camera, so I have no technical basis to my work. But yes, I guess I’m interested more in narratives. Also, I guess I’m reacting a little against some of my earlier work which always had an elaborate back story, and contextualisation was necessary to appreciate the work.

Your lightbox photographs are meticulously imagined mises en scène in which you pose as a character, and these scenes are often inspired by old paintings, aren’t they?
They are, but many are also based on observation, probably half the time on things I just happened to have seen. But yeah, some very obviously are ones that are based on paintings, like The Cactus Fan (2013), which was inspired by a Carl Spitzweg painting (The Cactus Aficionado, 1865). 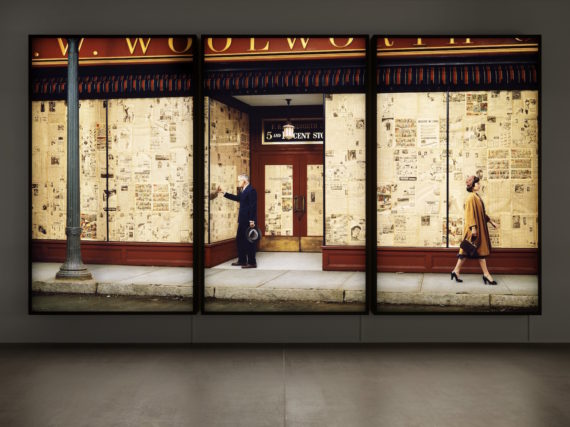 There’s an element of nostalgia in your work. You use the past, especially in reference to your own youth. The Avid Reader, for example, which I’m guessing is set in the early ‘50s.
That piece was inspired by something that I saw in Main Street in Vancouver, where I live. I saw an artist friend looking at the window of a shop that was covered on the inside with newspapers. I got fascinated by this idea of somebody who was a compulsive reader walking down the street and, seeing a bunch of newspapers, feeling compelled to read them. The scene is set in 1949, which is the year I was born, but the newspapers are from 1945, so it shows somebody reading about the recent past. And it’s a bunch of stories about the aftermath of the war. And I was interested in looking at two pasts, really – in someone from the past contemplating the previous past, in this case 1945.

The sets for your lightbox photos are very convincing. Do you spend a lot of time picture researching for your period setting?
I do a lot, but I don’t like to get bogged down in it. I used to do more when I was doing more complicated text-based work in the ‘80s. I did some work on Freud, and I spent years researching and I kind of went down a rabbit hole. I don’t like to do that any more. Now it’s more like wanting to avoid really obvious blunders; I don’t want to make a laughable mistake in terms of chronology or something. For The Avid Reader, I built the set for that in my studio. It was one of the first things I built.

Would you describe your work as autobiographical.
Yes, in some ways. These are people I think I could have become if I’d taken another path. The characters are people that I relate to.

You’re also a musician with your own band, The Rodney Graham Band. Tell us about the new album, Gondoliers.
I made it last year, after quite a long stretch. I find songwriting really difficult, particularly the lyrics, and I had a real dry spell, and I tried to work myself out of that and I ended up producing two albums within two years. This one is a short pop-rock record.

‘Rodney Graham: That’s Not Me’ is at the Baltic Centre for Contemporary Art until 11 June, 2017.

The album, Gondoliers, is released on the Vinyl Factory 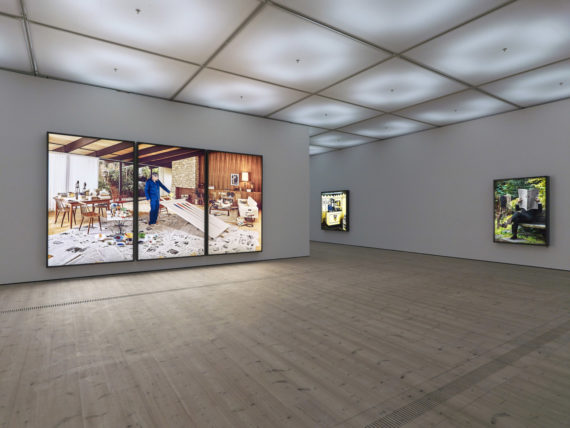 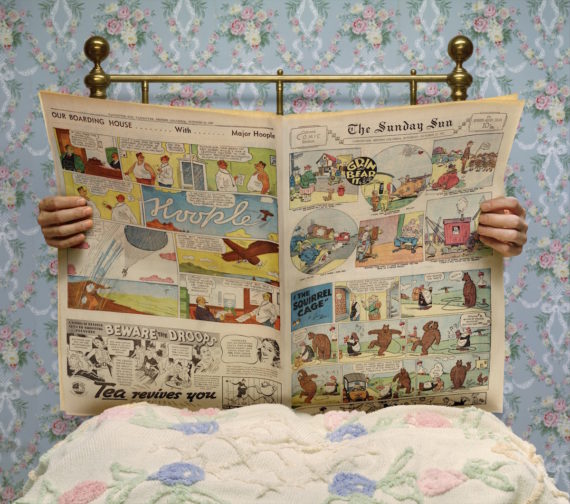 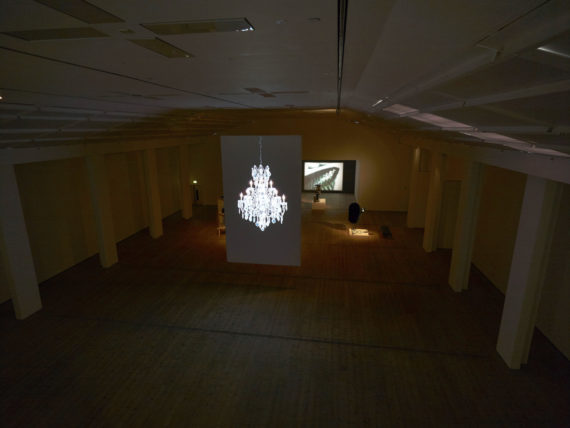