A Q&A with... Roger Hiorns, artist with youth and beauty on his mind - a-n The Artists Information Company 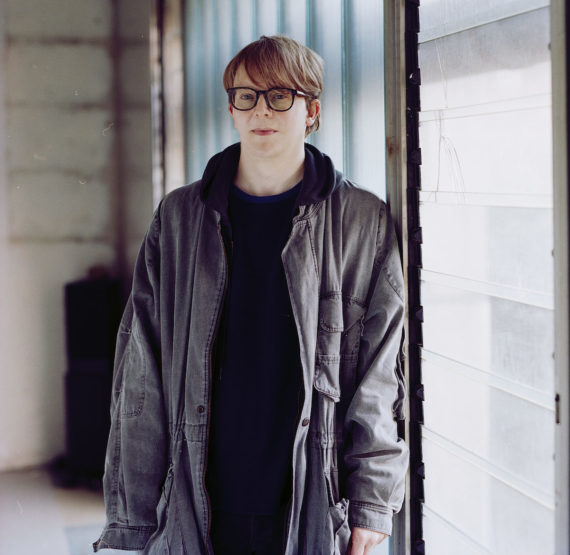 Roger Hiorns is probably best known for Seizure (2008), an Artangel commission for which he covered the interior of a condemned flat in South London with copper sulphate.

Dense layers of blue crystals grew from ceiling to floor and Hiorns has said how errors in the crystallisation process enhanced the work’s dazzling effect. In turn, Seizure had a powerful effect on many who visited it, provoking a range of responses from inducing people to pray to making them want to have sex.

The work saw Hiorns nominated for the Turner Prize the following year and it has since been permanently reinstalled at Yorkshire Sculpture Park.

In 2015 Hiorns was part of a group exhibiton at the Hayward Gallery, London, where he presented work exploring BSE, more commonly known as ‘mad cow disease’, and its human variant vCJD.

Hiorns, 41, has returned to his hometown for his latest exhibition at the Ikon Gallery, Birmingham. Here he presents sculptural works in which young men ‘merge’ with inanimate objects and materials.

Meanwhile, his recent ‘brain’ paintings revisit themes around disease and contamination, as well as the duality of the mind/body.

This year, if all goes well, Hiorns will be burying a decommissioned Boeing 737 near the outskirts of the city. He is also one of five artists shortlisted for the Birmingham Big Art Project, which plans to site a new £2 million permanent public artwork to the east of the city centre. 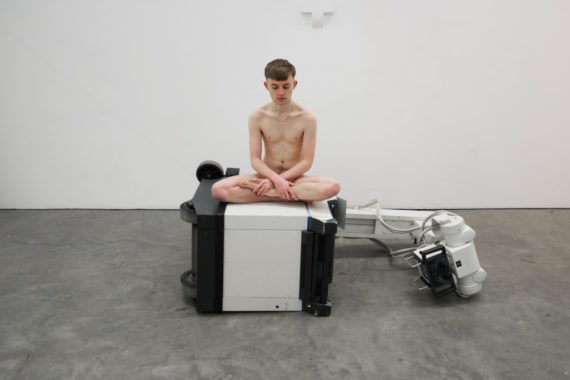 Your exhibition at Birmingham’s Ikon Gallery features three naked young men positioning themselves on various objects. What ideas are you exploring in the work?
You’ve got an oppositional thing going on: you’ve got these dominant objects and you’ve got these beings, the ‘youths’, who come with a certain amount of ambiguity – they’re a kind of trajectory into the future. And the idea is something to do with trying to slip through time. The objects are part of the history of the world, but the youths that will occupy the works will always be youths.

In this show there’s an altar stone which I showed at the Venice Biennale (in 2013), or at least a version of the one I showed at Venice. It’s an altar stone from a Church of England church that’s been crushed into dust. I had this idea about taking something authoritative and reducing it to a non-authoritative form. We think about the altar as a focus of devotional thought, and I thought, actually there’s an authority kind of relationship that was always played with by artists such as Donald Judd and the minimalists to some degree. But I wanted to atomise that devotional object, to render it into a kind of powder. And so you have a naked youth in the presence of a crushed Church of England altar stone, while another youth is sitting on a hospital X-Ray machine. 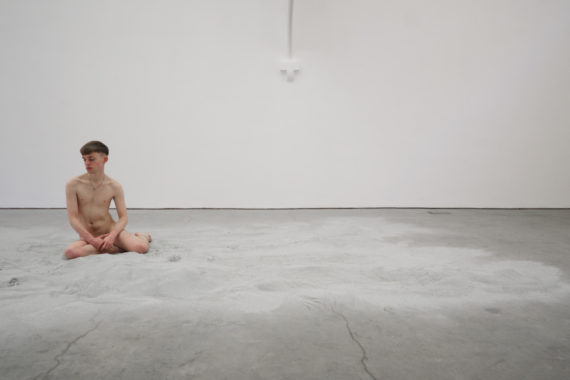 What drew you to this idea of the ‘youths’?
There is this idea that youth is idealised, but youths themselves aren’t. I think there is a paradoxical reflection on that which I find quite interesting. I think that as you get older the value of youth becomes higher. There is a virility that people miss. There’s that’s Martin Kippenberger quote, “Passing from the bonus of youth”, that I find interesting to address.

That these young men appear to merge with, for instance, defunct technology suggests a strong sci-fi narrative running through this show. Is science fiction something you’re interested in?
I think the science fiction aspect is something I’m obviously interested in, and if you’re going to aestheticise the future, you have two possibilities: you have a dystopia, a situation that’s against the human, who is surrounded by things that have gone wrong; and then you have the romantic, for example, having spacemen colonising a new planet and that being a kind of utopian idea. But what I think comes through in my work is the idea of the future and of the present co-existing at the same time. 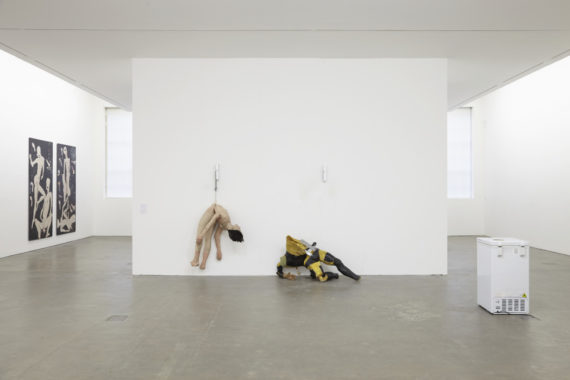 When you first showed a variation of this work, at your 2013 exhibition at the Hepworth Gallery, there was a lot of, ‘Look, there’s nudity,’ and very little attention to anything else. This must have irritated you a bit.
Yes, some people did focus on the thrill of male nudity. It’s been fascinating to see how people deal with it. But what really interests me is that these works are essentially sculptures and are essentially about materials. And the humans become part of the material of the work. I think maybe 10 or even five years ago, it was a problematic type of thinking to suggest that we were just material in the world, rather anything more substantive or meaningful. The work itself describes this kind of philosophical predicament.

Tell us about the ‘brain’ paintings in this show.
I wanted to take the idea of painting to its literal end, so essentially they’re the presentation of the brain on either a canvas or a piece of plastic or an object. I wanted to display the idea of cognitive ability rather than actually use cognitive ability to suggest a symbol, or landscape, or some other synthetic idea of painting. I wanted to find the material that was most ‘present’ in the world and brain-matter seemed to be the most interesting. And the idea that the material came from a calf, a creature that has ideas about its mother or of walking to the cowshed – all of that information, all of that cognitive ability is still present on the surface of the canvas. You walk along the street and you see people and you don’t imagine that they have a few kilos of jelly in their head. It seemed interesting to take that and present it as a kind of brutish material. 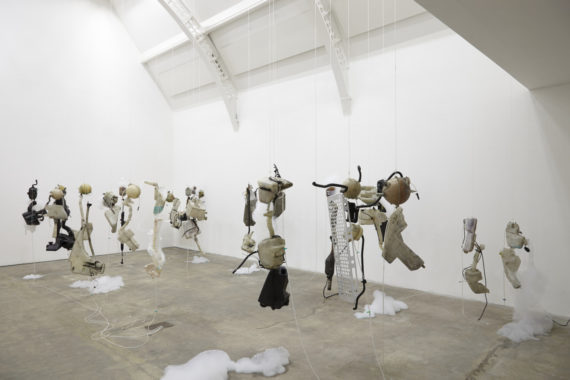 Seizure is still your best known work. You’ve said that there were some really interesting responses when people visited it, that some visitors wanted to pray, some to have sex.
Yeah, it was really interesting that people wanted to have sex in it. In fact, when people talk about Seizure they talk about the intensity of colour, but then they start talking about the intensity of their experience. I think the intensity of colour really resonated and did something to people’s psychology. I think that there was some moment when people’s thought patterns somehow became heightened. For me, there’s something really fascinating about the idea that there’s art that really intensifies your relationship to the world and it’s intensified because the materiality of the work itself is intensified.

And there were lots of conversations about beauty around Seizure that I skirted around at the time because I thought that the idea of beauty was a really problematic conversation to have. But now I think the idea of beauty puts the human back into the centre of the experience of an art work. I think we’ve had quite a long period of time where the human has been excluded from the art work. So, yes, Seizure was enjoyed and liked a lot by people who thought that here was a generous work for once. It wasn’t cynical and it wasn’t misanthropic. I mean, I see lots of art and sometimes find that I’m being squeezed out as a human.

Roger Hiorns’ exhibition continues at Ikon Gallery, Birmingham, until 5 March 2017. The artist will be in conversation with the writer and curator Tom Morton on Wednesday 8 February, 6-7.30pm. ikon-gallery.org 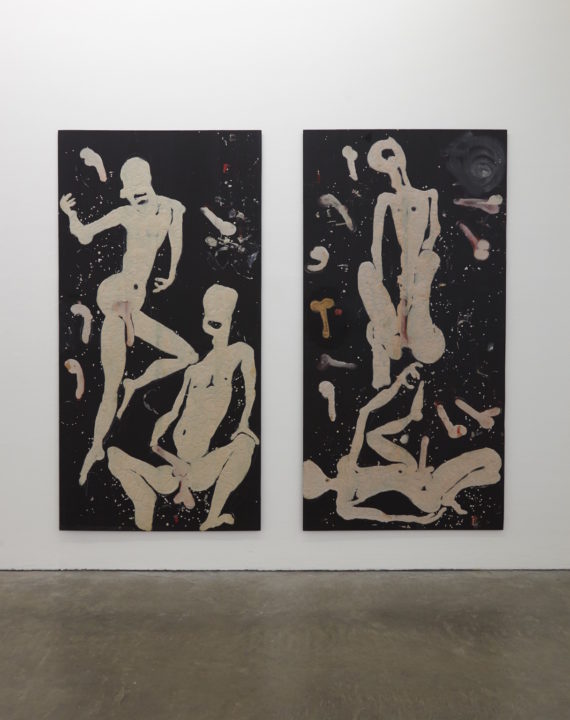