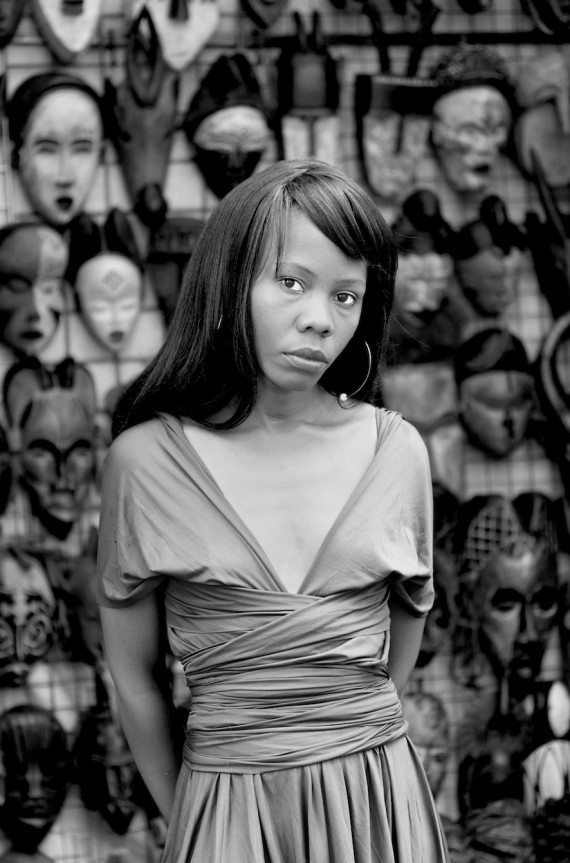 Artist, visual activist, historian, blogger: Zanele Muholi embodies many roles. An accomplished photographer from Umlazi in Durban, South Africa, she describes her work as a “living document” of the black LGBT community – of their lives, their experiences, and the terrible injustices they face, which include violent hate crime and ‘corrective’ rape.

Muholi has been widely exhibited, most recently at the Brooklyn Museum (New York), and was this year shortlisted for the Deutsche Börse Prize for her series Faces and Phases (2006-15) – pictured above and below – a striking collection of black and white portraits of queer and transgender people.

An ongoing project now numbering over 250 portraits, a large selection are currently on show at Liverpool’s Open Eye Gallery to coincide with Homotopia, the city’s LGBT arts festival. The exhibition, titled Vukani/Rise, is the first major presentation of Muholi’s work in the UK.

The show also includes a number of other works. ZaVa (2013) is a series of intimate, romantic shots of Muholi’s relationship with her white partner, Valerie, that challenges not only perceptions of LGBT relationships but also race.

Brave Beauties (2013-2014) features playful portraits of feminine, gay men and trans women that carry a serious message about how we want to be seen. Mo(u)rning (2014), meanwhile, captures the funerals of Muholi’s LGBT friends and community.

This is defiant, beautiful and highly considered work.

When did you first realise the potential power of the photograph?
Photography, or carrying a camera, happened very late on in life [for me], just after I finished Market [an advanced photography course at the Market Photo Workshop in Newtown, Johannesburg] in 2003. It’s not even something I said I wanted to do – I was forced by circumstances, and needed to see myself coming out as a black lesbian in the township.

Not having photographs or spaces, or films or documentaries that spoke about my existence – especially visual documents produced by members of my community – that became an issue. This provoked me in so many ways, provoked so many thoughts, left me with so many questions. How is it that people are forced to remain in that closet simply because nobody could take time and document? I had to make sure that I begged a lot of people that I knew at that time to come on board and work with me.

Was it difficult to persuade your community, that is often in fear of hostility and violent reprisals for being LGBT, to take part?
Not really difficult, because I had people that I either worked with, or trusted me enough with their lives and with their presence. Basically, with photography, you have to persuade people and respect them, and explain to them your intentions clearly. It means that someone cannot stand in front of you confused or without knowing what you want to achieve… It’s important to photograph people who are already out of the closet, because I don’t want to be responsible for somebody’s closet; we don’t want to repeat what has happened to us in the past. Photography forms part of our human rights strategy.

This declaration of LGBT identity comes across clearly in your first short film, Enraged by a Picture (2005). Ten years on, do you think your message about the LGBT experience in South Africa is finally getting through?
It is slowly coming through… Faces and Phases has been at Documenta, Venice Biennale, the Photographers Gallery in London – the project has been recognised as a living document. It means that if we start slowly like that, other countries in Africa will see the importance of visual history, which is used as a form of articulating our ongoing struggles as LGBT people. That excites me. And it means that I should be a responsible being as a South African; as a visual historian. Not as a collector, but as a producer of these images to further educate.

You run a successful blog, Inkanyiso, as a part of this documentation. Does it, and the real stories it features by its members, feed into your artwork now?
It does. It’s part of history. From telegrams to Twitter, from letter writing to blogging; all of these things existed before but were conveyed differently, and existed through time or across spaces. They form part of our histories and geographies.

Are galleries the best place to have a social or political interaction, do you think? I notice you have had bespoke furniture made for this exhibition in order to deliberately encourage discussion and reflection.
Art is about people, and it is for the people, and art is about dialogue. Art galleries have good political art, or art that speaks to politics, that forces us to change policies and our own way of thinking. It depends on what each gallery space is for, and who occupies or is employed in that setting, and what they believe in. LGBT artists need these cultural spaces in order for them to share political messages which are of concern. Let our work be open to everybody; let’s not dare to limit ourselves to anything, or be forced or contained in one fixed space.

What I like most about mainstream galleries or museums is that you are not speaking to one homogeneous group. They’re places where people can think, ‘Not everyone is as free as me, and has a right to choose as much as me.’ Our people need to occupy each and every mainstream space that has to do with art and culture, sport and recreation.