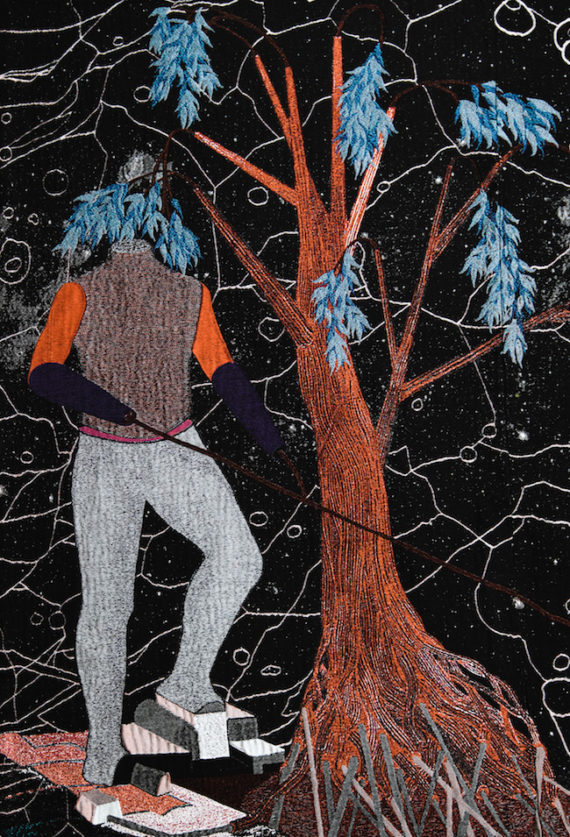 The Artes Mundi Prize is a biennial award for artists whose work engages with global politics. And since we live in such interesting times, artists are naturally drawn to issues that reflect this, though often explored through a historical prism.

So it is with Anna Boghiguian, the nomadic Egyptian-born artist who’s now in her 70s. She’s created a dense two-gallery installation consisting of a big steel joist acting as a gateway to the exhibition, found objects (two boulder-sized meteors), paintings and drawings, and illegible jottings that presumably map out her working processes gleaned from her research into communities impacted by steel manufacturing. Also included are cartoonish cut-outs of workers, strikers and the m’lords of the industrial class. 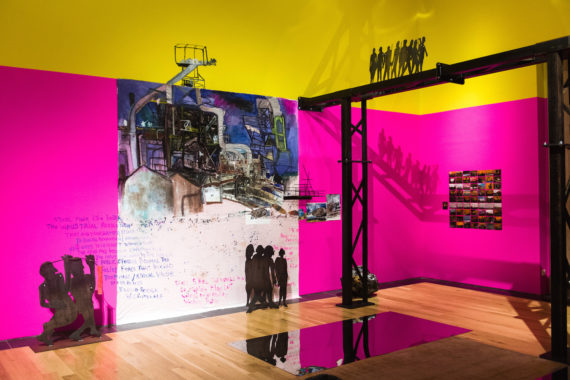 The whole ensemble takes us from the iron age, which enabled the tools that created the conditions for small settlements and agriculture, to the jauntily dark satanic mills of the industrial revolution, and beyond to the present. To complement Boghiguian’s illustrative and expressionistic paintings on paper, the walls are painted in shocking pink, acid yellow and midnight blue, perhaps to suggest that we’ve been plunged into the depths of an industrial furnace.

State and military surveillance is the concern of the American photographer Trevor Paglen, whose telescopic photographs take us to space – a crystal-clear photograph of the moon, with half its cratered surface sharply delineated, the other in shadow – alongside murky images of drones, air bases, an aircraft hangar, all hazy with heat and flattened into impressionistic blocks of colour.

One image shows a cluster of satellites on a valley bed, each in its own pool of yellow light, and the twilight air a smokily ethereal green. I’m not sure what these tell us about the nature of surveillance, except perhaps that it’s on a scale we may not even begin to imagine, and to denote a sense of awe and mystery that surrounds it. 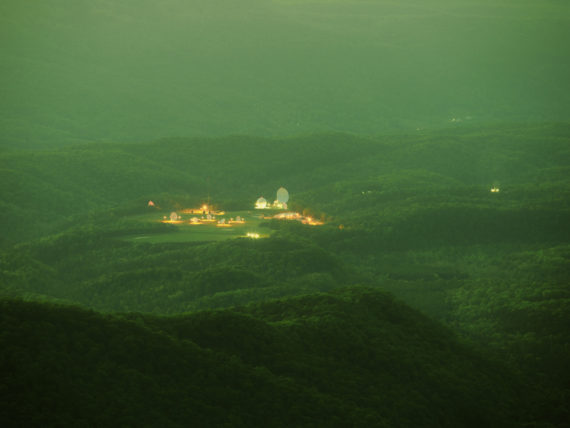 Particularly compelling is the work of French-Moroccan filmmaker Bouchra Khalili, whose film Twenty-Two Hours offers a fascinating meditation on the radical French writer Jean Genet’s association with the Black Panthers and his campaign to free its incarcerated co-founder Bobby Seale.

Divided into three segments, ‘The poet’, ‘The revolutionary’, and ‘The witness’, the film makes stark use of still images, while two young women directly address the viewer with a series of ruminations and questions about a slice of history that remains contested but is hugely potent. Would the Black Panther movement succeed today, or is it firmly rooted in the historical moment? Did it fail and if it did, why? Who bears witness and how do we remember?

The two women interview a surviving Panther, and there are segues into the Palestinian liberation movement with which Genet was also involved, as was Jean-Luc Godard, who also makes an appearance. The work is powerful partly because it raises important questions about the politics of memory. 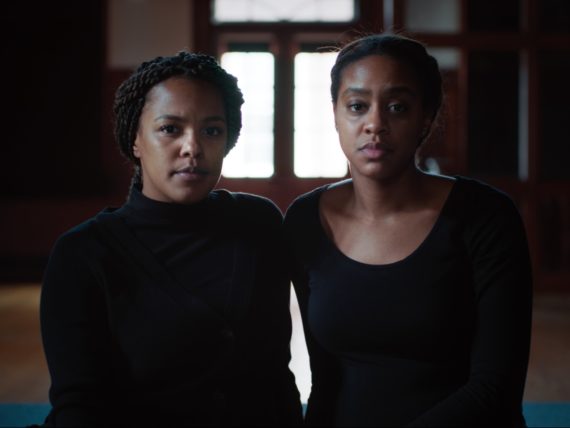 Antwerp-based Nigerian artist Otobong Nkanga makes connections of a different kind. A big, beautiful tapestry presents a kind of cosmic map illustrating the interconnectedness of life, the earth, the universe. It features a headless, and handless, figure with foliage in place of a head, a tree of life, a wheel of human hands gripping and pulling a rope that connects back to the headless figure, and lines that map the connections between us, the land and the elements. In the age of the Anthropocene, it’s a reminder of the eternal primal forces of nature.

Finally, there’s Thai artist Apichatpong Weerasethakul who presents a two-screen cinematic ‘shadow-play’. Foliage and curtains sway in a breeze, a woman sits at a table sipping tea, there’s a sewing machine unit, and a man in a bedroom, though the man and woman appear to have no obvious connection. Not much, in this silhouetted domestic realm, happens beyond this, although there are intimations of an impending rainstorm. It’s a slight but beautiful and subtle mood piece, with only a hint of it being a little too aesthetically precious. 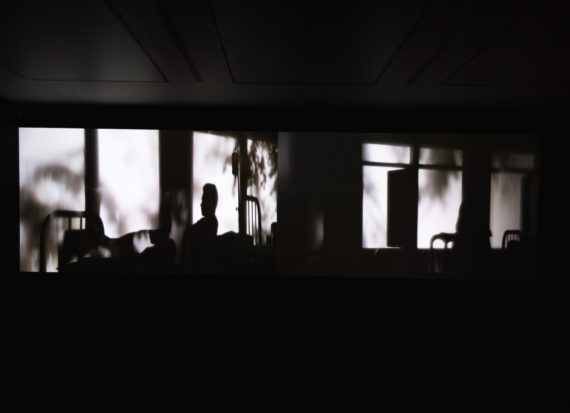