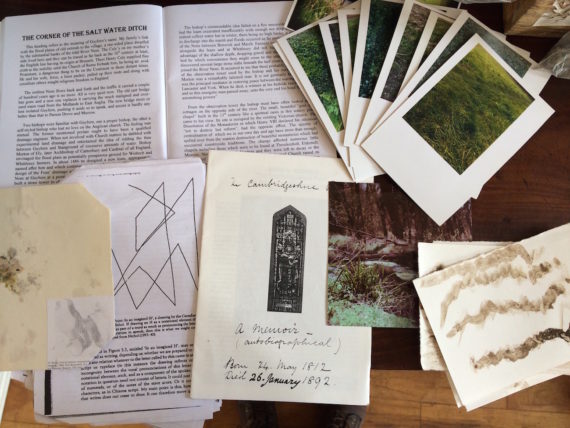 Every so often palm-sized red knots come into view, woven through the grid of Gudrun Filipska’s Instagram account. A fish bowl filled with bottled Canadian seawater and nestled into the grasses of the Cambridgeshire Fens reappears empty with a rusty key at the bottom.

The accompanying captions reveal these intriguing objects to be part of the ‘S Project’, Filipska’s ongoing exchange with Canadian artist Carly Butler.

Photographing a folio of images with @williamkirkusfilipskimcdonald for inclusion in the S Project with @carlybutlerart – including nautical bowline knots from Carly’s 1000 knots performance work. Marking sites of flooding and danger in the Fens. #carlybutlerart #knots #fens #flooding #accidents #wierdhand #nene #suttonbridge

Clayton recommended the platform as a way to connect with other artist mothers and to develop networks for support and exchange. Filipska found this to be true: “It’s quite a useful place where discussion can be started and continued through messages, emails and sometimes become ‘real life’ professional relationships or friendships.”

Medium format image from my Saltwater walks in the Fens with vials if seawater sent to me by @carlybutlerart and a fishbowl. From our #sprojectarchive some of which is currently showing @flux_factory NY.

Filipska has continued to share insights into her working processes on her own Instagram and for Arts Territory Exchange, an organisation she founded to bring artists working in remote locations together.

One of the first things the organisation asks participants to do is to take a photograph of the view from their home or studio, which is shared with their exchange partner. “However spectacular their landscape may be, it is mediated through a mundane domestic shot which has as its interests the minutiae of daily life rather than anything spectacular.”

A post shared by THE ARTS TERRITORY EXCHANGE (@artsterritoryexchange) on Oct 8, 2018 at 12:24pm PDT

I ask Filipska about the prevalence of landscape imagery on Instagram and how artists could counteract what can be considered superficial image making: “I don’t think it is an artist’s job to set out to correct these visual tropes, just as it wouldn’t be their job to rifle through someone’s personal photo album of holiday snaps and offer judgement. But other perspectives can be offered as counterpoint, yes.”

She adds: “My hope was Arts Territory Exchange could act as a kind of interface between the two worlds of reality and simulation, particularly simulations and assumptions about landscape identity and ‘otherness’.”

Image from the exchange between Arminee Chahbazian in rural California and Jacqueline M Byrne in Dorset UK. This #walkbox was created by Arminee from objects collected while walking in her home territory and photographed by Jacqueline in her garden in Dorset. #walk-box is a project originally conceived by Jacqueline M Byrne as an exercise in documenting space and the experience of walking. #psychogeography #walking #documentation #geography #spacial #practice #geology #finds #environment #collaboration #postal #artist #garden

A post shared by THE ARTS TERRITORY EXCHANGE (@artsterritoryexchange) on Feb 6, 2018 at 5:42am PST

There is a sense of community and connection in Filipska’s online presence, particularly through the founding of Arts Territory Exchange.

I suggest that this contradicts a prevailing story that social media is causing isolation: “It is both isolating and a lifeline at the same time I think, and of course it really is the most subjective of mediums. In my own very partial experience it enables me to reach out to the world and make connections without leaving home and children.”

Despite these positives, the dystopian is never far away. “I am a huge fan of post-apocalyptic science fiction,” says Filipska. “So every serotonin hit I get from a new Instagram ‘like’ is backgrounded by thoughts about the end of it all!”

Use the Artists + Instagram tag for more in the series