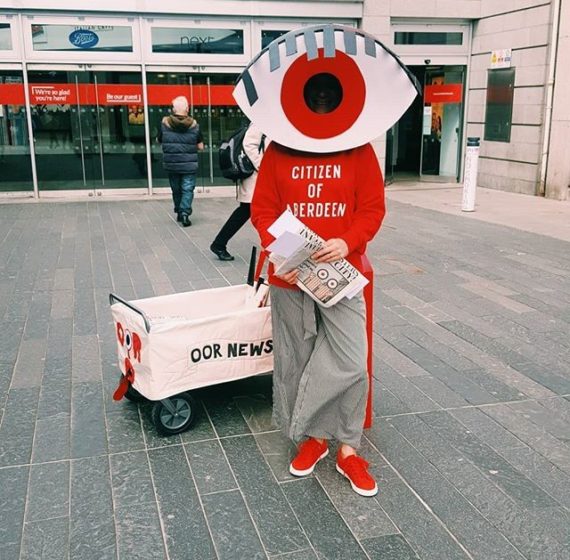 A survey of 350 culture sector workers carried out by Scottish Contemporary Arts Network (SCAN) and the Federation of Scottish Theatre (FST) has revealed that more than one in four artists and art workers may leave Scotland because of Brexit. The figure was almost twice as high among foreign Scotland-based artists from across all art forms.

The findings, reports The National, reveal that of the respondents, 26% said they were considering or planning to leave Scotland and the UK after Brexit. The numbers rose to 40% of (other) EU nationals and 33% of nationals from outside the EU. Only 5% of these have applied for UK citizenship, with a third considering applying.

Seonaid Daly, director of SCAN, said: “This is the first hard evidence we’ve seen about the potential exodus of our international peers and colleagues who all help make Scotland’s visual art scene so vibrant and globally respected. This, as well as increasing pressure on budgets across the board, paints a very bleak picture for the future of Scottish visual arts.”

Nuno Sacramento, director of Peacock Visual Arts in Aberdeen, said: “I arrived in Scotland in 1997 with a rucksack and five words of English, and became the director of an arts organisation. Scotland was such a welcoming, open and international place. Now I’m very concerned. The hostile environment is a terrible thing and it’s going to be applied to people from the EU next.

“On a personal level I am feeling quite insecure. I would rather not leave, but it has crossed my mind. I am prepared to if necessary. I don’t want to live in cultural isolation.”

Documenta obelisk to continue to be displayed in Kassel despite being removed from original site Artist Olu Oguibe has reached an agreement with the city on a new location, ensuring the work will remain on public display. The 16m-high obelisk, which was originally installed in June 2017 for Documenta 14, had become a target for right-wing local politicians who were enraged by its message of hospitality and warmth towards refugees.

However, despite the work being removed from its original site in Königsplatz on 3 October, it will now be installed on Treppenstrasse, a pedestrianised shopping street that also houses other Documenta works purchased by the city.

Christian Geselle, the mayor of Kassel said in a statement: “We thank Olu Oguibe for conceding to the wishes of many people in our city.”

Oguibe added: “As the forces of intolerance resurge and try to reverse the human values and institutions that many have fought to so hard to advance and protect, we need the monument and its message ever more urgently.”

As the Art Newspaper reports, when the obelisk was dismantled last week, the Kassel branch of the anti-immigrant AfD claimed a ‘complete success’ on its Facebook page. The group wrote that the ‘champagne corks are popping!’, saying the monument’s removal was a sign ‘of the coming revolution in migration policy’.

Glasgow’s Centre for Contemporary Arts (CCA) set to reopen on 22 October after building work is completed The venue on Glasgow’s Sauchiehall Street, which has been closed since the Glasgow School of Art fire in June, was hoping to reopen to the public on 14 September. However, this was delayed after Glasgow City Council deemed that the building was still unsafe due to the possible collapse of the nearby art school’s Mackintosh building.

At the time, CCA director Francis McKee told a-n News that the delay had put the venue on a “financial knife edge” and that the Creative Scotland regularly funded organisation had “reached the end of its cash flow” after three months of “zero” commercial income.

In a statement posted on its site, CCA said: “We are now working towards reopening the building by Monday 22 October. Thanks to everyone for their support and patience throughout our closure, we’re really looking forward to welcoming you all back to CCA very soon.”

Enjoying the @balmy_alley Block Party when I overheard someone talking about the vandalism overnight in Clarion Alley by a couple and their CHILD.
Went down there to see it for myself. Several murals were completely defaced.Tomorrow 2PM, come down to Clarion Alley and help clean pic.twitter.com/dxTfGlWjgI

Vandals deface San Francisco murals with Trump slogans  The public art project on San Francisco’s Clarion Alley, which is now in its 28th year, was the subject of political vandalism last week. A black and white mural of protesters with picket signs featuring anti-Trump slogans such as ‘Families belong together’, and ‘Vote him out’, was defaced with red hats featuring the Trump slogan ‘Make America Great Again’.

Another mural, which includes the names of a number of black and Latino men killed by police over an inverted American flag, was tagged with the slogan ‘#FakeNews’.

Megan Wilson, an artist who helps maintain the site, told the Guardian: “It really feels like hate crimes. Every time we go to the alley, we are braced for what is going to be next.”

She added: “They want to silence us, and they’re not going to. Because we are fierce and we don’t back down. If anything, we just get stronger through this.”

Calls for museums and cultural institutions to reassess ties with Saudi Arabia following disappearance of journalist Jamal Khashoggi The Saudi government has been accused of killing Khashoggi, who worked at the Washington Post, after he entered the Saudi Consulate in Istanbul on 2 October. He has not been seen since.

An article in the New York Times questioned whether a year-long Arab art initiative involving major institutions such as the Brooklyn Museum, the Guggenheim and the Metropolitan Museum of Art (Met), which aims to ‘build greater understanding between the United States and the Arab world’, should be reassessed. It has been spearheaded by Edge of Arabia, a UK-based organisation partially funded by the Saudi government.

In response, Daniel Weiss, president and chief executive of the Met, told the New York Times: “As a global cultural institution, a core activity of our museum is to engage with representatives from museums and governments around the world.” However, he added that the museum is “in the process of learning more” about the alleged assassination.

Artist Frances Disley joins Castlefield Gallery’s Board of Trustees Liverpool-based artist and manager of the Bluecoat Print Studio is also a lecturer in fine art at Liverpool Hope University. Previously she was director of the Royal Standard, where she continues to be a studio holder, and for the last two years she has been a Liverpool Biennial Associate Artist.

Commenting on her appointment, Disley said: “I am particularly interested in how Castlefield Gallery can help grow, support and enable the artist community within the region, with particular reference to developing and sustaining your practice, and especially their work with artists at a similar career stage to myself.

“Being based in Liverpool and having been involved with the development of opportunities for artists here over the years, I am positive I can bring a lot to the role, especially given Castlefield Gallery’s commitment to the artist community operating across the region.”