Artist explores internet addiction: "I’m talking about conflicts at the heart of my life" - a-n The Artists Information Company 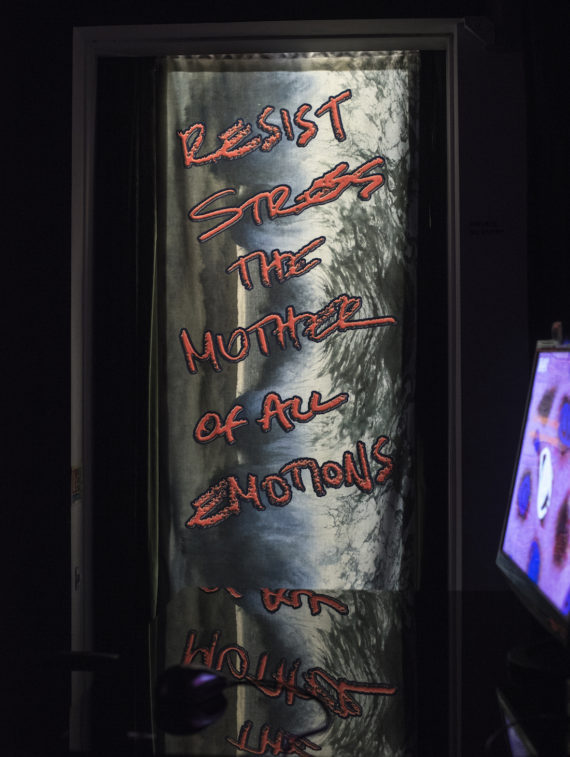 “I’m trying to articulate the pull of online spaces. I want the experience to be seductive and at the same time, a bit disquieting. Because that’s how I feel; I’m embroiled in these things. I’m talking about conflicts which are at the heart of my life.”

Artist Katriona Beales is discussing ‘Are We All Addicts Now?’ (AWAAN?), her exhibition at Furtherfield Gallery in London which explores the nuances of compulsive internet usage. Through sculpture, moving image and installation, the show seeks to translate Beales’ ambivalent experience of online environments into the tactile and bodily.

The exhibition forms part of a cross-disciplinary and collaborative investigation into the lure of digital technology, instigated by Beales three years ago. In addition to the exhibition, which is on until 12 November, AWAAN? culminates in the publication of a book, and a symposium at Central St Martin’s, London on 7 November.

AWAAN? taps into burgeoning research into internet addiction, and wider medical, political and social discourses about the ways in which proliferating digital technologies are impacting on us. Importantly, the project questions where agency resides in our online behaviour. At its heart lies the charged and as-yet-unresolved provocation: do we shape technology, or does technology shape us?

It was an interest in her self-confessed ‘unhealthy’ online habits that initially led Beales to embark on the project. Suffering from insomnia a few years ago, she became curious about the hours she was spending scrolling through content in the middle of the night.

“There was something in that process which was almost trance-like or meditative,” she says. “It enabled me to switch off when I was feeling stressed out. It was almost therapeutic, but at the same time counterproductive because it wasn’t helping me to sleep. And I was thinking, actually, how many images have I looked at?” 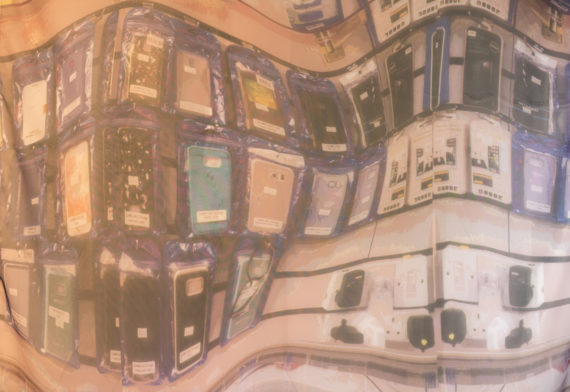 Beales’ desire to understand her behaviour has resulted in her working with practitioners from across artistic, technological and scientific communities. Throughout, she has positioned herself as a kind of  “(un)informed amateur”, using her artistic practice as an open space into which different influences and ideas can permeate and merge.

Beales worked closely with Dr Henrietta Bowden-Jones, a clinical psychiatrist and one of the UK’s leading specialists in addiction. A long-term advocate for the exchange between the two disciplines, her The Art of Science blog is a collection of artworks inspired by science. “Henrietta’s perspective has been invaluable,” says Beales. “She’s brought this very robust medical research, and also this enthusiasm for the way that art can expand the audience for scientific research.”

Throughout the project, the pair met to discuss Beales’ work in progress. As well as providing her own expertise, Bowden-Jones has acted as a conduit between Beales and the wider scientific community, promoting the artist’s work to her peers and interpreting medical research into laypeople’s language.

Also instrumental to the project have been artist and curator Fiona MacDonald, whose work explores our relationship with other living species, and Vanessa Bartlett, who for her PhD is using her curatorial practice to research the relationship between digital technologies and psychological distress.

Fundamental to AWAAN? is its attempts to push beyond extreme claims on the perils and benefits of digital technologies towards a more balanced position. Beales is keen to stress that the actual research is much more inconclusive than headlines suggest. “There’s some very conflicted research about the relationship between how much time you spend online and mental health. [There’s a lot of] fearmongering, but when you dig down, the research is actually quite ambivalent.”

AWAAN? has tapped into these simultaneous conversations, enabling the subject to be explored from a number of perspectives. The book, edited by Bartlett and Bowden-Jones, is the first of its kind on internet addiction and contains a plurality of voices which include philosophers, artists and scientists. Topics discussed include a psychological overview of internet addition, the phenomenon of the digital detox, and an exploration into the role of dopamine in fueling consumerism.

Says Bartlett: “It’s been fun to put essays by more senior researchers who have very dystopian views of technology next to younger writers who are much more positive about the social impacts of the internet. Likewise, it was interesting to bring together writing by psychological researchers and humanities scholars, finding that often both disciplines wanted to say similar things, just using very different language.” 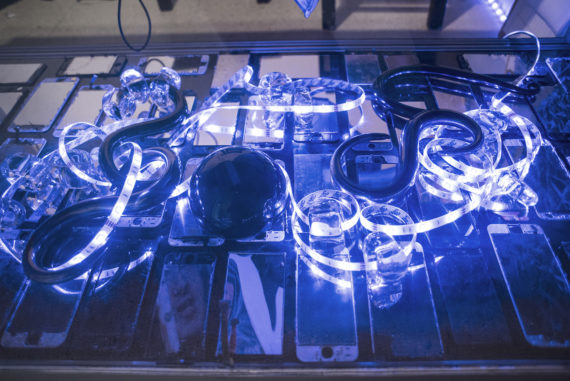 Key to AWAAN?‘s development were three interdisciplinary workshops at PEER in London last year, co-led by Beales and MacDonald. Exploring subjects including the mechanics of addiction, the materiality of devices and hyperconnectivity, attendees ranged from artists and technologists to an app developer and a lecturer in behavioural workplace psychology.

In the show at Furtherfield, Beales draws on both the clean, shiny sleekness of digital devices and the sumptuous, colour-rich saturation of online environments. Visual excess is critical to the work, she says: “I was really interested in ideas around information overload. I felt that this approach was a lot more relevant than a minimal aesthetic – on a web browser you’d have pop ups, cookies, gifs and text, so much happening at once on one surface.”

The exhibition includes a series of table-top glass sculptures, some of which contain screens that mimic and exaggerate digital interfaces. The installation update from the wasteland I contains a sunken velvet bed, tucked away behind a curtain. On a small screen, embedded in a glass sculpture, two pink and purple translucent moths flutter against a black backdrop, while on a larger screen a still moth glows blue and purple.

Through headphones, Beales whispers disjointed sentences. Like the scroll of unrelated content from a Twitter feed, references to Trump are juxtaposed with mentions of cute cats and desperate pronouncements such as ‘We all fail, always’ and ‘I do not want to be human today’. The effect is at once hypnotic and claustrophobic; the softness and darkness encourage intimacy, but the restless movements of the bright moths, distorted by the glass, suggest a distracted mind, trapped in a loop.

Visitors to the show will also be able to download MacDonald’s sound piece, Mycorrhizal Meditation. Initially developed for one of the workshops at PEER, the work is inspired by the mycorrhizal network, an ancient underground system created by funghi which enables plants to communicate. Functioning as a respite from the digital, it also aims to connect visitors with Furtherfield Gallery’s home in north London’s Finsbury Park. 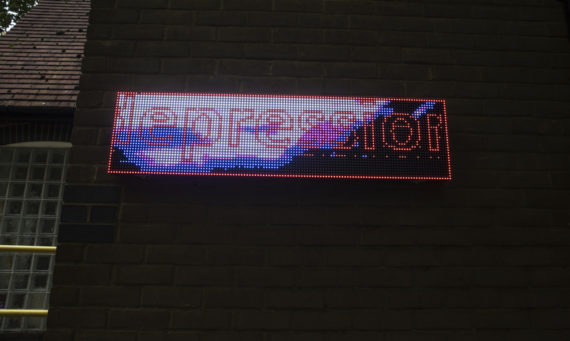 As well as seeking to foreground the ambiguities inherent in our relationship with the online, AWAAN? also addresses the way in which online environments are deliberately constructed to draw us in to profit-driven patterns of consumption and production. In particular, the contested field of neuromarketing is said to use knowledge of the brain to devise strategies, such as flickering lights, which keep users glued to ‘sticky’ online platforms, like Twitter or Instagram, and gambling machines in casinos.

Says Beales: “It’s about the manipulation of human behaviour. It’s you as a subject without that much autonomy, just negotiating this landscape. It’s like there are signposts and, without realising it, you’re following them.”

As well as raising questions about the addict’s personal responsibility for his or her compulsive behaviour, exploring the reasons behind our excessive engagement with the online has a noteable resonance with artists, as Bartlett explains: “In the book, artist and academic Emily Rosamond explores the concept of ‘reputation addiction’ in online platforms and how this is particularly prevalent for artists or other creative researchers, for whom professional survival depends a lot on online profile and reach.”

This subject will be explored further at the symposium in November, Addiction, excess and artists: strategies of resistance. Programmed by Bartlett, it will see Beales, MacDonald, Rosamond and digital media academic Tony D. Sampson discuss ways in which artists might defy neuromarketing and gamification techniques.

While the answer to Beales’ question ‘Are we all addicts now?’  remains inconclusive, the project is compelling because her own ambivalent experiences of the online world are so easy to relate to. The project encourages us to critically reflect on the extent to which the online has infiltrated our lives and, crucially, how in control of this we feel. It’s a fascinating exercise – if not a little disconcerting.

Are We All Addicts Now? continues at Furtherfield Gallery, London until 12 November 2017.

Fiona MacDonald will lead a Mycorrhizal event on 21 October.