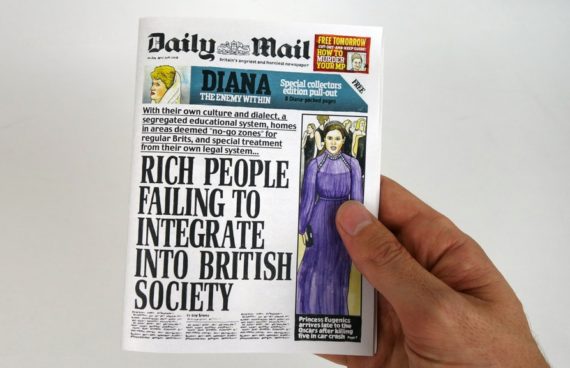 Having given away all the copies to passersby in Liverpool city centre, he said he was launching the crowdfunder to raise £2650 to cover the costs of a second print run of the 24-page parody, which also comes with an eight-page pull titled ‘Diana: The Enemy Within’. At the time of writing he has raised just under £3,500.

Writing on his Kickstarter page, he said the “compressed, hand-drawn paper draws attention to the glaring hypocrisies baked into a rag that claims to care about things like moral decency and the sexualisation of children, while also regularly publishing photographs of underage girls in bikinis or low-cut dresses”.

He described the newspaper  as “containing all the misogynistic, racist, war-and-fear-mongering you’ve come to love and expect from the Daily Mail”.

Canadian artist writes open letter in response to censorship of transgender themed work  On September 4 2018 Arts Commons, a multi-arts venue in Calgary, Canada, turned off the 3-channel video work A Thousand Cuts by B.G-Osborne exhibited at artist-run The New Gallery’s +15 Window, also situated in Calgary. It followed complaints and concerns from patrons who object to the Canadian artist’s work containing “a lot of swearing and nudity”.

Arts Commons asked for the artist to edit out parts of the work, and if not, the work would need to be turned off. Osborne has written an open letter in response, imploring the organisation to “deal with complaints against challenging art work (especially when the content deals with marginalized communities and bodies) in a more constructive way”.

In an effort to highlight how conversations about the work’s content were shut down before they could begin, Osborne’s letter goes on to state: “Trans people are still being murdered at a seriously alarming rate, misrepresentation will continue to happen in mainstream media, we will try to take back our image and tell our own stories, cisgender people will keep being offended, and we will keep fighting.”

Tate Modern appoints Dr Yasufumi Nakamori as new senior curator, international art, photography Taking up the post in October 2018, Nakamori will lead on the development of Tate’s collection of photography and on the programme of photography exhibitions and displays. His new role at Tate follows two years heading the department of photography and new media at the Minneapolis Institute of Art.

Nakamori’s appointment continues Tate’s commitment to collecting and exhibiting photography; the number of photographs in Tate’s collection has increased five-fold over the past decade. There have been a host of photography exhibitions across the Tate galleries in recent years, including Shape of Light: 100 Years of Photography and Abstract Art currently at Tate Modern.

Celebrity secret postcard art sale for Dulwich school The Charter School in Dulwich, south-east London, is to auction art made by the likes of Jeremy Corbyn, James Corden and Hugh Grant, to raise funds following government cuts of £1m to facilities. The school hopes to raise £20,000 by selling 500 £40 tickets, each corresponding to a secret celebrity postcard artwork, in an exhibition entitled the “Secret Charter”. The event, hosted by actor James Nesbitt, will take place at Dulwich Picture Gallery on Monday 15 October.

‘Secret Charter’ was conceived by pupil parent Laura Stephens and is designed to support the school’s art department, ensuring children “continue to receive an arts education they currently enjoy”, the school said. The funds will go towards refurbishment of the department’s dark room and a new printing press. Drama and music departments will also benefit. 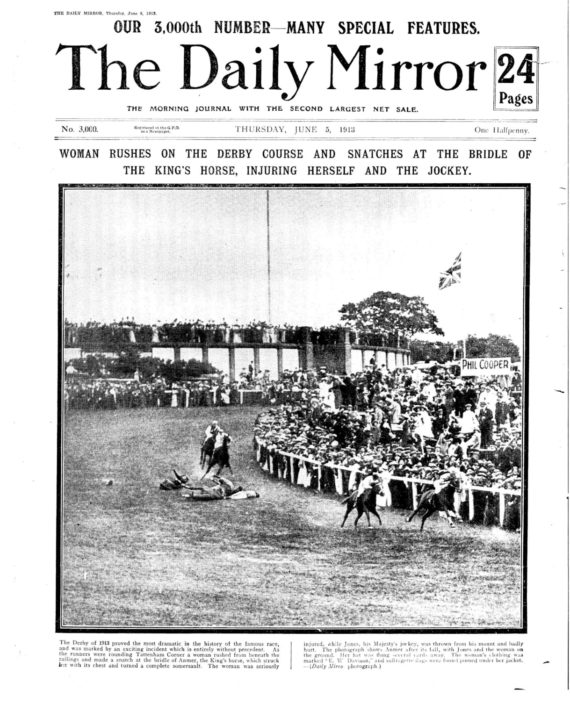 Statue of suffragette Emily Davison unveiled in Morpeth A lifesize steel replica of suffragette Emily Wilding Davison, who was trampled to death by King George V’s horse at the Epsom Derby in 1913, was unveiled on Tuesday 11 September. The memorial, created by sculptor Ray Lonsdale, has been placed in Carlisle Park in Morpeth, Northumberland, just south of Davison’s home town Longhorsley.

The Suffragette’s death is one of the most enduring images of the women’s fight for the right to vote, and the sculpture marks 100 years since some women were granted the right to vote. Davison was a campaigner who adopted radical methods. She went on hunger strike a reported 49 times and was arrested in 1909 as she attempted to hand a letter to prime minister Herbert Asquith.

Turner Contemporary endorses plans for on-site hostel The gallery says it is “extremely supportive” of a proposal by original architect, David Chipperfield, to build a 100-room hostel on the sea front. The plans aim to provide new opportunities to explore Margate as the town prepares to host the Turner Prize in 2019, and will provide accommodation for visitors attending events related to the gallery’s exhibitions programme.

Turner Contemporary’s endorsement follows a call for public involvement, in plans to “reconfigure” the building amidst concern the institution is “at capacity” and at risk of delivering a lower-quality visitor experience.

Chipperfield’s plans, which include a café, meeting rooms and social spaces, look to generate an annual income to help safeguard the gallery’s financial situation. Responding to the proposals, a gallery spokesperson said the organisation is working with partners “to realise a new vision to ensure that it is more sustainable”.