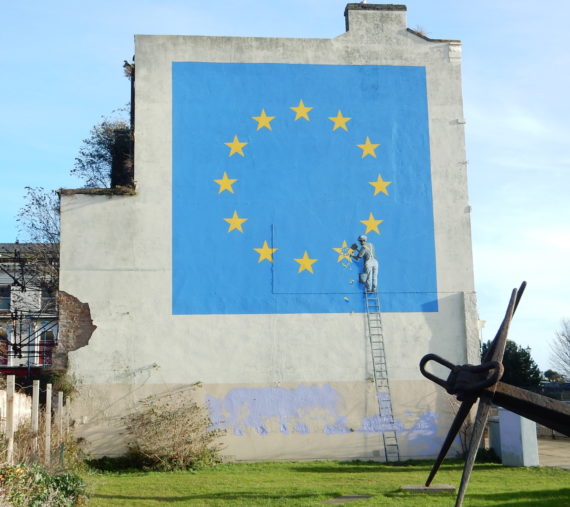 A survey of Creative Industry Federation members prior to the EU Referendum  suggested that 96% of them intended to vote Remain. Certainly the first response to the result within the arts community was one of dismay. But as more information comes into the public realm the mood has changed. The focus now is on campaigning to prevent the arts from being left in a legislatively worse position than previously.

a-n is one of those campaigners with its FreeMoveCreate campaign, co-founded with the Incorporated Society of Musicians. The campaign highlights three goals that will ensure “a good Brexit” for artists: freedom of movement to find and deliver work in a European marketplace; ease of transport of materials and artworks without prohibitive administration, financial burden or barriers; and sustainability of international cultural and intellectual exchange for education and talent development.

Elsewhere figures such as Lord Puttnam are taking amendments to the European Union (Withdrawal) Bill (pdf) in the Lords, and the Creative Industries Federation (CIF) is actively lobbying the government on behalf of the wider creative sector.

Just short of one year to the day since Article 50 was triggered to begin the two-year process of leaving the EU, the Federation organised a ‘Brexit Conference’ – an intensive afternoon of talks, panel discussions and short films to discuss the creative industries after Brexit.

“The Creative Industries are our future,” declared CIF chief executive John Kampfner in his opening remarks. He was reiterating former prime minister John Major’s statement made in a well-argued speech at a previous Federation event in February.

And so the tone of the day was set; in discussing the creative industries post-Brexit, we should be aware that nothing less than the economic future of the UK is at stake.

The opening panel, chaired by Kampfner, was devoted to political commentary with Faisal Islam (political editor, Sky News), Dia Chakravarty (Brexit editor at the Daily Telegraph) and Bronwen Maddox, (director of the Institute for Government). “Where are we now and where are we going to end up?” asked Kampfner of each panelist.

Maddox stated: “The EU is hearing an existential threat to the single currency, to the European project, and so they are not going to move. We have a stand-off.”

Islam said that the government is in disarray and that it is impossible to know what the final Brexit deal might look like. “The cabinet has shifted and May has carried the cabinet with her a bit, past some staging posts, but the reason I say you can’t tell is parliament. As everyone knows we have a minority government held up by the DUP.”

The next major ‘staging post’ will come this autumn, when the government is expected to bring an outline Brexit deal to parliament for a vote. “This is the key vote,” said Chakravarty. “There will be all kinds of amendments on it, and the speaker has to decide if he will accept them.”

Islam added: “If the deal gets voted down then the momentum is with no deal. If the single market remainers get the vote, then it shows we have the numbers to extend Article 50, or some other mechanism to stop the cliff edge.”

The conversation about political strategy and potential outcomes is of course entirely speculative. It seems a long way from the daily work of earning a living in the creative sector. But clearly, the shape of the Brexit deal, or the likelihood of a second referendum, are of critical importance. What is agreed or not agreed will have a huge impact.

This view was echoed by Suella Fernandes MP, parliamentary under secretary of state, Department for Exiting the European Union. “The UK can continue participating in current EU funds including Creative Europe until 2020,” she said. “EU citizens will have up to two years after Brexit to apply for settled status.” This provides welcome if short-term clarity but perhaps not a great deal of reassurance.

She continued: “The government values the creative sector. We recognise the effort that you make puts the Great into Great Britain. You help this small collection of islands punch above its weight.

“This is why the creative industries will be absolutely central to our post-Brexit future. It is the key to our future prosperity. You are integral to how we see ourselves as a nation and how other countries see us. Open, upbeat and global, building on our relationships that go beyond borders.”

She stressed that after the UK leaves the EU on March 29 2019, “the structures will be based on existing EU agreements” and that “leaving the EU will not effect the government’s support for the creative sector. Our creative industries will thrive outside the EU”.

It was a politician’s speech, full of phrases such as “we want” and “we are seeking”. Heavy on rhetoric, it had many strong but unsupported statements.

In the Q&A afterwards, Kampfner challenged Fernandes. “The creative industries is made up of an army of freelancers. How can you reassure us that this specific demographic will be absolutely front and centre in the new migration procedures?” Fernandes’ reply that this “is up for grabs” produced groans from the audience.

It is immigration policy, closely allied to skills mobility, that is a key pressure point for the creative industries post-Brexit, and it comes up again and again. Will UK companies be able to easily hire talented people from the continent? And will it become prohibitively expensive to tour exhibitions and performances, as it currently is outside of the EU?

For the pro-Brexiters, Brexit represents the opportunity to open British arts up to the rest of the world through a more progressive immigration policy. They were represented at the conference by Munira Mirza (previously of the Mayor of London’s office under Boris Johnson and now an advisor on arts and philanthropy), Manick Govinda (senior arts professional and co-founder of Artists for Brexit), and Diane Banks (founder of Diane Banks Associates, a literary and talent agency),

Mirza said: “It is phenomenally difficult for artists from outside the EU to come here to work. I supported a campaign about this within the mayor’s office. Our immigration policy should be by democratic consent.

“Lots of people are saying that Brexit is inward facing but that isn’t the case, it’s about facing the world. It’s the EU that has restrictive deals that are inward looking. It’s a big protectionist market. At the moment we are unable to make big deals with America for example.”

Her view is challenged on all sides. Chris Hirst, of Havas UK, an advertising company, is acutely aware of market competition: “We can do whatever deals we like but they don’t make trade happen. People have to choose us. Everyone now has a choice.” Ian Blackford MP, SNP Westminster leader, said: “If anyone thinks the rest of the world is sitting around waiting to do deals with us then they are delusional.”

Tamara Rojo, artistic director of English National Ballet, points out that the EU is not omnipresent. “I don’t know why you are so confident that the rest of the world wants to trade with us. The reason we are not touring America is because America is limiting us through taxes and through visas.”

Michelle Cawardine-Palmer, managing director, National Theatre Wales, has looked at finances post-Brexit. “Every tour is going to cost £6,000 more because of visas, carnet, extra charges, and that is a lot for the subsidised sector.”

She added: “Anything that is going to cost more or generate more red tape, which are hidden costs in terms of time, are huge barriers to freedom of movement. This needs to be presented to government as major concerns.”

Mirza responded: “I believe we should try to resolve that,” at which point the audience spontaneously erupted into a collective cry of “how?” Later in the day, a panelist pointed out that multiple UK governments have had 30 years to sort out the problems of bringing artists from outside the EU into the UK. It is not a new problem.

Banks, who describes herself as a “free marketeer” and is a non-executive director of the conservative think tank Bright Blue, accused the sector of middle-class elitism. “96% of the creative sector voted remain and it shows me that the sector is worryingly out of step with the rest of the country. And it shows a lack of diversity of thought within the sector.”

She also insisted that “as a creative sector we cannot afford to be tied to EU vested interests. 93% of the world don’t live in the EU. There is a whole world out there as a potential market and I want to trade with it.”

Govinda believes that the vote to leave the EU “has pointed out the divide between cosmopolitan privilege and people who don’t have access to that kind of life and culture. I think it was a wake up call to the cultural sector. For all the engagement work it is doing, somehow the referendum has been a rejection of the cultural status quo…

“Culture preaches to the converted or it is trying to nudge people to think in a way that cultural authority wants them to think. It’s not going to engage with a northern former steel worker or dock workers; it will engage with new refugees, romanticising the idea of them.”

How can the sector present their concerns to government? Both Suella Fernandes MP and Hilary Benn MP, also on a panel, noted how useful the Federation’s ‘Global Talent Report’ is. Can the creative sector do much more given the “disarray”of the Brexit negotiations?

Mirza recommends actually writing policy for the government: “It would be helpful if the sector drilled down into more of the detail. You could get right in there and write the policy. Recognising the political context and explaining to the government exactly what needs to happen, not just at a very high level.”

Benn reeled off a list of democratic actions: “Make sure your voice is heard, your needs are articulated, go and see your local MP. Understand that the deal in October is not going to cover all of the detail.”

Cawardine-Palmer said: “In the charitable sector the tax regimes need to be made to work.” Banks added to the wishlist: “We need a super flexible visa and immigration system.”

Mirza recognises that there will be “bumps on the road.” She recommends that the government “commit to continue funding to the amount of the EU for example, which is a relatively small amount [£40 million a year], and will be saved from what we pay to the EU.”

But it is clear that considering the creative sector beyond Brexit – or indeed any sector – is impossible at this point. We are simply not there yet. As journalist after politician after sector actor repeated, negotiations will not have concluded before we leave the EU in a year’s time.  In reality, the real detail of the negotiated fine print will take place during what was repeatedly misnamed as an “implementation period”.

This was stated very clearly by Hilary Benn. “There is still a lot we don’t know… I think if all goes well the door will remain open to many possibilities, but that will take place during the implementation period.”

Anyone who was hoping for inside information or clarity from either informed journalistic commentators, or actual government insiders, would have been sadly disappointed. The Creative Industries Federation assembled a stellar cast of speakers, but not one of them had any further information to add to the sparse amount already in the public domain. The uncertainty looks certain to remain for quite some time yet.

The Brexit Conference took place on 15 March 2018 at The National Gallery, London