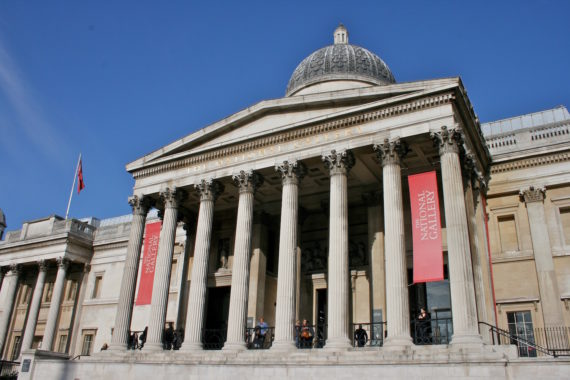 27 educators seek recognition as employees rather than freelancers from National Gallery following alleged sacking The group, whose roles involved welcoming school tours and members of the public, and giving talks and workshops, are claiming unfair dismissal citing age and sex discrimination, and saying they are entitled to retrospective holiday pay.

The educators also claim that because they were paid through a taxed PAYE system, given official badges, were subjected to regular appraisals, and provided offices and access to the staff canteen, they were effectively employees.

The group has set up a  page on the crowdfunding website CrowdJustice to raise funds for the legal claim. On it they state: “Despite the day-to-day reality of our integrated working relationship, the National Gallery insists we were self employed. We have been denied the protection and rights we were due as employees or workers.

“The gallery has shown no interest in conciliation, despite our attempts to raise concerns personally with the Director and senior staff. It is with disappointment and sadness that their behaviour has led us to this point of bringing a legal claim. The gallery has replaced our large group of long-serving educators with a small number of in-house educator roles on greatly reduced salary and terms, to which we do not consent.”

As the Guardian reports, the National Gallery has responded in a statement: “The entire group were consulted for their views together and individually over the change for a period of three months between October 2017 and January 2018. These jobs were offered to all of our existing freelance service providers last year. We still have vacancies which are available, although unfortunately not all of the group have expressed an interest in these.

“The Gallery is not yet in receipt of the details of each complaint, but believes that we have acted both lawfully and fairly in changing our service provision to one of secure employment.”

Stolen Robert Motherwell painting returned to the Dedalus Foundation after 40 years According to the New York Times, the artwork, Untitled, was one of dozens that disappeared when Motherwell hired a moving company to relocate work to a new storage site in 1978. It was discovered in a garage in New York by a man whose late father had worked for the moving company.

As Artforum reports, Katy Rogers, who is director of the Robert Motherwell catalogue raisonné project, said that the man had hoped to sell the painting. However, he agreed to return it once he learned the circumstances surrounding its disappearance.

Pussy Riot invade pitch during Russian World Cup final as political protest Activist group say its ‘performance’ Policeman enters the Game, was designed to mark 11 years since the death of the dissident Russian poet and conceptual artist, Dmitri Prigov. Four members of the group were quickly apprehended by security before later being charged with ‘violating spectators’ rights’.

As the Art Newspaper reports, in a statement Pussy Riot explained: “The World Cup has reminded us of the possibility of a heavenly policeman in a wonderful Russia of the future. But the earthly policeman, who intervenes in the game every day and knows no rules, is destroying our world.”

The group added that they have issued a list of demands to the Russian government, including the ‘release of all political prisoners, an end to arrests at political rallies and to the fabrication of criminal cases’.

Museum planned at Thai cave where 12 boys were rescued The initiative is being spearheaded by the leader of the rescue mission, Narongsak Osottanakorn, who is a former governor of the region. As Hyperallergic reports, he said: “This area will become a living museum, to show how the operation unfolded. An interactive database will be set up. It will become another major attraction for Thailand.”

However, the proposed museum has not been met with universal support in the region. Thailand’s deputy head of national parks, Chongklai Woraponsathron, said: “In this crisis situation, today, I don’t want to talk about work, but I think the Thai people, we are lucky that we are going to have a world class tourist attraction.”

In addition, a film of the event, which saw 12 young footballers and their coach trapped in the cave for over two weeks, is being proposed. At least two companies are reportedly looking to make a film about the rescue mission.

Venice Biennale theme revealed Titled ‘May You Live in Interesting Times’, the 2019 biennial will respond to the current political climate with a specific focus on the rise of fake news.

At a press conference held at the Palazzo Giustinian in Venice, Ralph Rugoff, curator of next year’s edition, said: “At a moment when the digital dissemination of fake news and ‘alternative facts’ is corroding political discourse and the trust on which it depends, it is worth pausing whenever possible to reassess our terms of reference.”

He added: “The 58th International Art Exhibition will not have a theme per se, but will highlight a general approach to making art and a view of art’s social function as embracing both pleasure and critical thinking.”

20,000 people sign online petition calling on the New York museum MOMA PS1 to adopt policies that support working mothers The move comes after curator Nikki Columbus filed a lawsuit against the institution for allegedly revoking a job offer after its hierarchy learned she had recently given birth.

The petition states: “When companies and organisations discriminate against working mothers it excludes capable, talented candidates from the work pool and disadvantages them, their families and their future. It is unacceptable that an institution dedicated to bringing beauty to the world would behave in such an ugly manner.”

The petition is aiming for 25,000 signatories – something it is well on its way to achieving – and has already received global support with signatures coming from countries including Belgium, Denmark, Russia, Italy, India and South Africa.