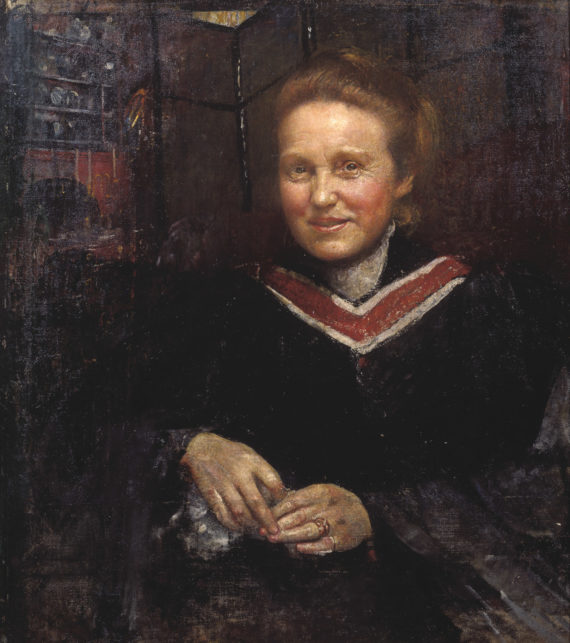 Tate marks centenary of women’s right to vote Annie Swynnerton’s portrait of Millicent Fawcett has gone on on display at Tate Britain to coincide with the centenary today of the Representation of the People Act which gave women over 30 the right to vote.

Later this month, the work will head to Manchester Art Gallery for its exhibition ‘Annie Swynnerton: Painting Light and Hope’, which opens on 23 February. In addition, a new statue of Fawcett by Gillian Wearing will be unveiled in Parliament Square later this year.

Fawcett was leader of the National Union of Women’s Suffrage Societies, and instrumental in gaining women the vote in 1918. She was present in parliament for the act that granted all women equal franchise in 1928.

Alex Farquharson, director of Tate Britain, said: “Swynnerton poignantly captures the qualities of resilience and compassion in her sitter, revealing the force behind this exceptional woman. We are thrilled to be able to mark the centenary of women’s right to vote with a work by an artist who was an ardent campaigner for women’s rights and whose subject is one of the most important pioneers in the history of women’s suffrage.”

Collapse in local authority funding spells end for advocacy body Arts Development UK is to wind down in April after attempts to increase membership were unsuccessful, ArtsProfessional reports. The membership body supporting local authority arts services says it can no longer “provide effective support and remain sustainable” due to a lack of finances.

The majority of ADUK’s members – almost 400 – are local authority arts services and officers but their numbers have been dwindling due to cuts in local authority spending on the arts. ADUK’s own research found that 38% of local authorities in England and Wales have no dedicated arts officer or service, while in 2016 a report by Arts Council England estimated that local authority arts investment had declined by £236m since 2010 – equivalent to a 17% drop.

ADUK, which began operating 35 years ago, hopes that some of its services will be picked up by other organisations, and ADUK chair Jane Wilson told ArtsProfessional that the organisation is talking with the Chief Culture and Leisure Officers Association (cCLOA) and the Artsworks Alliance about this.

Cornelia Parker’s general election artworks unveiled The UK’s first ever female ‘Election Artist’ has produced artworks for the Parliamentary Art Collection. Her films Left Right & Centre (above) and Election Abstract are the first digital artworks to enter the collection.

These are accompanied by 14 photographic prints of selected posts from Parker’s Instagram feed; images taken during events of the 2017 general election campaign, including hustings, manifesto launches, protests, marches and televised debates.

Court rules dealer of works stolen by Jasper Johns’s assistant can be charged with racketeering. A Manhattan district court has ruled in favour of Equinox Gallery of Vancouver, in its civil suit against the New York art dealer Fred Dorfman, who was implicated in a scheme to sell stolen work by US artist Jasper Johns. Equinox alleges that Dorfman was involved in racketeering activity when he sold the gallery a stolen painting for $800,000 in 2008.

In a 25 January ruling, Judge George B. Daniels wrote that the Canadian gallery can seek a RICO (Racketeer Influenced and Corrupt Organizations) claim against the dealer.

Equinox’s complaint alleges that Dorfman, who runs Dorfman+ gallery in Chelsea, knowingly sold around 37 unfinished or discarded works that Johns’ former assistant, James Meyer, stole from his employer’s studio in Sharon, Connecticut, between the 1990s and 2012 – sometimes taking pieces directly from the trash.

Meyer claimed they were personal gifts from the artist and worked with Dorfman to sell them, making around $9m. In 2015, Meyer pleaded guilty and was sentenced to 18 months in prison and restitution.

Kirsty Lang appointed chair of the board of Baltic Following in the footsteps of Peter Buchan, who took up the position since November 2009, Lang will take up the position from April 2018, ahead of one of the Baltic’s most significant years with a programme centred on the Great Exhibition of the North.

Lang is an experienced and respected journalist, perhaps best known as the presenter of Radio 4’s flagship arts programme, Front Row. More recently she has spent three years on the board of the British Council, working with over 100 countries across the world in the fields of arts and culture, English language, education and civil society. 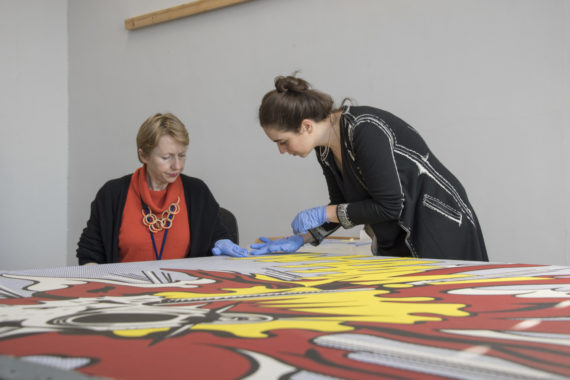 The painting, which has been on almost constant display since it was acquired by Tate in 1966, is one of the first artworks of its generation to require conservation. With Tate staff, scientists from the Centre for Colloid and Surface Science (CSGI) in Florence, Italy, have developed a new gel based on nanotechnology called ‘Peggy 6’. The gel provides greater control in cleaning a painting and has been produced through the Horizon 2020 funded research project, NANORESTART.

“We believe the development of this new gel material is a significant leap forward in the care of modern and contemporary works and it has the potential to be used by conservators around the world,” says Bronwyn Ormsby, Tate’s principal conservation scientist.

“The greatest reward is seeing Whaam! revived. The colours are brighter and more true to how they were when originally painted, the lines are more crisp and the Ben-Day dots positively zing off the surface.”

Manchester Art Gallery puts Pre-Raphaelite painting back on display after outcry John William Waterhouse’s Hylas and the Nymphs was removed in order to ‘start a debate about sexuality on canvas’, with the work featuring a group of young nymphs luring a young man to his death in a pond. The gallery thanked the public for the ‘fantastic’ response to what they claim was only ever going to be a temporary removal.

Board of the Arts Council of Northern Ireland at loggerheads with chair over attitude to funding The Belfast Telegraph reveals the council passed two votes of no confidence in its chair John Edmund late last year and also staged walkouts from meetings.

The council were also incensed by a recent speech by Edmund in which he said arts organisations were too dependent on government handouts to finance their activities. He also said during his address at the Arts and Business awards ceremony in Belfast that the arts should be run more like a business.