Calling out misogyny: artist posts own labels next to Picasso and Gauguin works at New York's Met - a-n The Artists Information Company 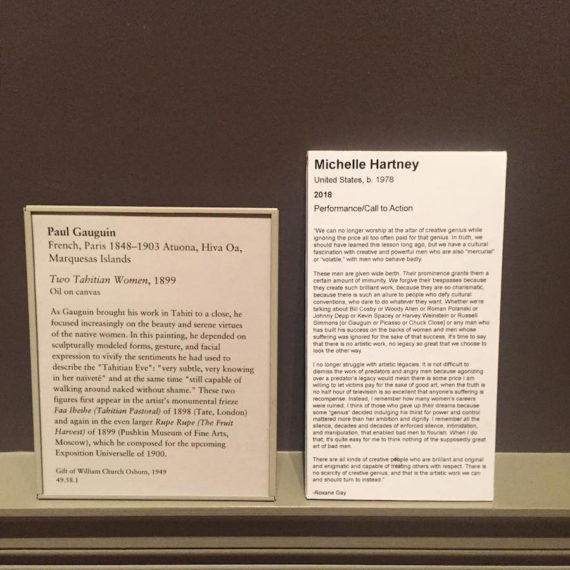 The Chicago-based artist Michelle Hartney has installed her own labels next to two Picasso and Gauguin works at the Metropolitan Museum of Art in New York in an attempt to highlight the historic transgressions of celebrated artists.

Next to Picasso’s The Dreamer, she posted a new title ‘Performance/Call to Action’, and quoted Australian comedian Hannah Gadsby’s stand-up act that criticises the artist for the ‘mental illness of misogyny’, citing his affair with his model Marie-Thérèse Walter when she was only 17.

A similar title was posted next to Gauguin’s Two Tahitian Women, quoting from an essay by the writer Roxane Gay. It read: “It’s time to say that there is no artistic work, no legacy so great that we choose to look the other way.”

The Met removed the protest labels the day after Hartney’s action, which took place on the evening of Saturday 3 November 2018. The museum has, as yet, declined to comment on the incident.

Last night after the march I went to the @metmuseum to protest the lack of education the museum offers its patrons. Many people learn about Picasso and other artists solely through museums. I enacted a performance/call to action to separate the art from the artist, using the words of my hero @hannah_gadsby a comedian and art historian who so articulately spoke about this topic in her Netflix comedy special Nanette. (She wasn’t involved in this so I don’t want to implicate her) “The history of western art is just the history of men painting women like they’re flesh vases for their dick flowers.‘…Cause it doesn’t get any better with modern art, I tell you. I trip on the first hurdle. Pablo Picasso. I hate him, but you’re not allowed to. I hate him. But you can’t. Cubism. And if you ruin… cubism, then civilization as we know it will crumble. Cubism. Aren’t we grateful… that we live in a post-cubism world? Isn’t that the first thing we all write in our gratitude journals? “Oh, thank god.” I don’t like Picasso. I fucking hate him… he did suffer a mental illness. Picasso did. He suffered badly and it got worse as he got older. Picasso suffered… the mental illness of misogyny… Smarter men than I have proved he didn’t suffer a mental illness, but they’re– No, they’re wrong. They’d say he’s not a misogynist. They’re wrong. He was. If you don’t believe me, let me provide you a quote from Picky Asshole himself. He said, “Each time… I leave a woman, I should burn her. Destroy the woman, you destroy the past she represents.” Cool guy. The greatest artist of the twentieth century. Let’s make art great again, guys. Picasso fucked an underage girl. And that’s it for me. Not interested. “But cubism… We need it.” Marie-Thérèse Walter. She was 17 when they met. Underage. Legally underage. Picasso was 42, married, at the height of his career. Does it matter? Yeah. Yeah, it actually does. It does matter.” -Hannah Gadsby #fuckpicasso #fuckromanpolanski #fuckbillcosby #fuckgauguin #fucklouieck #fuckwoodyallen #fleshvasesfordickflowers #separatetheartfromtheartist #metmuseum #picasso #gaugain #woodyallen #billcosby #romanpolanski #jerrysaltz #robertasmith

Explaining the reasons for the protest, Hartney told the Art Newspaper: “I was doing this performance to ask for some contextualism. I hope that in the future they will consider providing more information about these artists who were worshipped and considered creative geniuses. I’m hoping to start a kind of conversation.”

She added that she had used a very light wall adhesive for her labels, saying: “I wanted to be respectful of the property.”

It’s not the first time Hartney has made such an intervention. Earlier this year she post a new label next to the Balthus work Girl With a Cat.

In an Instagram post, she said: “Men like Balthus, Picasso, Gauguin, Woody Allen, and Roman Polanski, to name just a few, have been granted immunity from criticism over their actions, in spite of the number of women and girls they have objectified, mistreated, raped, or molested.”